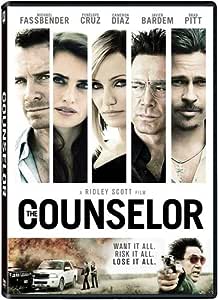 Cormac McCarthy, making his screenwriting debut and director Ridley Scott interweave the author's characteristic wit and dark humor with a nightmarish scenario, in which a respected lawyer's one-time dalliance with an illegal business deal spirals out of control.

4.2 out of 5 stars
4.2 out of 5
2,391 global ratings
How are ratings calculated?
To calculate the overall star rating and percentage breakdown by star, we don’t use a simple average. Instead, our system considers things like how recent a review is and if the reviewer bought the item on Amazon. It also analyzes reviews to verify trustworthiness.

Jim
5.0 out of 5 stars The Slaughter to Come
Reviewed in the United States on April 29, 2016
Verified Purchase
This is the most important film for the 21st Century. I absolutely love it. It functions like a Faustian play, a grim prophesy of humanity's future. The story is one we have all seen before. Man gets involved with dealing drugs, and he is not prepared for the consequences. The drug deal goes very bad. That is the story. It is a simple and familiar story. But the presentation is the beauty. The horrific themes and imagery. The dark worldview that transforms this standard plot into a brilliant nightmare. Above all, it is a condemnation of modern culture, where man is divorced from the realities of his actions, because Nature (both ecological and human) is treated as an externality. Yes, the dialogue is philosophical and "over-the-top." It functions very much like a Shakespearian play (and pulls it off). This is Scott's best film, and an amazing script by McCarthy. It is a beautiful work of art, and deserves multiple views. The acting is outstanding. Brad Pitt is tragically self-aware. Cameron Diaz gives the performance of her career. This film's themes are essential for our coming world. Very violent and haunting. Don't listen to all the negative reviews. Watch this film and make up your own mind. Think and sense for yourself.
Read more
64 people found this helpful
Helpful
Report abuse

Smith Family
4.0 out of 5 stars Don't Believe the Negative Reviews
Reviewed in the United States on June 1, 2017
Verified Purchase
After reading all of the negative reviews of this film, you'd think that Cormac and Ridley just fell off the turnip truck. Seriously, these are two of the greatest artists of the last half-century. The great Cormac McCarthy can't write a screenplay, really? And Ridley Scott suddenly forgot everything he learned about directing in the previous 40 years?

This is a deep movie with serious but accessible thematic elements: caution, heroism, love, greed, ethics, fidelity and death. There IS a plot (perfectly linear, no jumping around the timeline, flashbacks, etc.) and it isn't difficult to follow with a bit of attention and imagination.

Having said that (and having only seen this extended cut) I can imagine how a version that was even 15 minutes shorter would lead to some head scratching. Every scene feels necessary, nothing is superfluous.

One other issue that people may face is that the antagonists are never shown. We see low-level mechanics, people who are simply operating on orders from above, but the big players of the cartels are never pictured. There is one "El Jefe" in the film, the revelation of whom comes very late, and very surprising.

I think most people's difficulty with this film is that it is very deliberately paced, this unraveling of The Counselor's life. There is dialogue aplenty, very lyrical, the kind of carefully chosen words that are spoken when circumstances are deadly serious. This is not another superhero flick with lots of quick cuts and things blowing up in spectacular CG. Beautifully filmed and acted, this is serious, meditative work of cinema, a bit gruesome at times, but certainly one I will revisit in the future.

Tricia WIlson
5.0 out of 5 stars like how the Counselor is constantly correcting the pronunciation of ...
Reviewed in the United States on October 11, 2016
Verified Purchase
Outstanding script and well-cast. This is the third time I've seen this movie and each time, I pick up on some nuance, like how the Counselor is constantly correcting the pronunciation of words by his Hispanic "patrons" instead of really listening to what they are attempting to tell him about the futility of his situation. A great tale of moral ambiguities with incredibly graphic visuals. Excellent cinematography. As with every role he undertakes, Javier Bardem is outstanding and imbues his flawed character with believable idiosyncrasies that could not have been scripted. Brad Pitt also is excellent.
Read more
24 people found this helpful
Helpful
Report abuse

Glenda Hunt
5.0 out of 5 stars I'm breathless
Reviewed in the United States on December 25, 2020
Verified Purchase
I've not seen a more intense movie all year. Not even sure why I chose to watch it, but I'm glad I did. Why didn't Cameron Diaz pick better movies? Had she chosen better movies in the beginning of her career, I might have paid more attention to her. What an amazing part. The entire ensemble was amazing. Very few things about the plot were transparent or easily figured out, except the final two death scenes. I did see that coming. The action was tight. The intrigue unmatched. The insight into that violent life where they just don't fear death was insightful. And the lengths that people (from the cleaners to the "doctors" to the enforcers to the dealers) go to in order to make money and acquire money was...I have no more words. But one thing is for sure: I now understand that the reason they will never legalize drugs is because it is an industry that supports a whole lot of people from the bottom to the top. Remove it and there would be chaos. During this COVID lockdown, I've watched a lot of movies, but this is the first movie that got my undivided, 100% attention. I can't watch it again because it made me feel sick to my stomach -- once is enough. Amazing movie.
Read more
One person found this helpful
Helpful
Report abuse

Gets Around
1.0 out of 5 stars My goodness what a flop
Reviewed in the United States on November 23, 2020
Verified Purchase
I tried I really did, but this movie starts bad and goes nowhere. Do we really need to open with a long boring absolutely pointless sex scene followed by disconnected vapid tidbits that challenge the attention span, and way too many opening credits. Acting is bad and perfunctory, Cameron Diaz couldn't seem more bored or wrong for whatever part it was she was supposed to be playing. If this movie ever gets engaging, I can't stick out the tedium and irritating dialog to get there. Waste of $3.
Read more
One person found this helpful
Helpful
Report abuse

Tim Gallegos
5.0 out of 5 stars Ridley Scott What More Can Be Said?
Reviewed in the United States on October 4, 2019
Verified Purchase
Any time a film is made offering a take on how drug cartels operate both here and abroad is important. It's important for the reason people need to know who and what they are and what level and degree of extreme they are capable of going to. Be that as it may, and this has been repeated too many times, if it weren't for consumers lust for their product, then they would only choose to find some other avenue of crime and corruption, which by the way, would always include violence. This is one hell of a film, with set pieces that are very relevant to today's world. From the standpoint of film making process, If a picture could be considered near perfect, this would be one. Everything fired on all cylinders with excellent performances by all.
Read more
One person found this helpful
Helpful
Report abuse
See all reviews

Amazon Customer
4.0 out of 5 stars Just look at the cast
Reviewed in the United Kingdom on July 31, 2018
Verified Purchase
I missed this DVD when it was first released. It is a good film - the director is a firm favourite of mine. He can be very graphic, I found it extremely disturbing and couldn’t stop thinking about it. I passed it onto a friend so sadly it won’t be joining our massive collection of DVD’s.
Read more
2 people found this helpful
Report abuse

Rick J
3.0 out of 5 stars Star cast, but only average performance
Reviewed in the United Kingdom on June 3, 2020
Verified Purchase
Probably the worse film by Ridley Scott,
that I hace seen thus far. The story was fractured and confused. Fassbender came out as crybaby, Cruz as the little woman and Pitt, as if he was prompted on every line he said, whilst Diaz was her usual scheming bitch. I don't know to describe Bardem's performance, other than static.
Read more
Report abuse

Bakes1003
4.0 out of 5 stars A cool, yet dark film...
Reviewed in the United Kingdom on February 3, 2016
Verified Purchase
Quality film, with some very suave and sophisticated characters in it, it's pretty slick,
and being the working class type that I am, it stills feels distant to the life I lead,
as it has fast cars, mansions, and lots of party animals with loads of money, in high status jobs,

It's a very good under rated film, with a few plot twists, and some more darker, unpleasant stuff in it,
But I will need to watch it again, to make a proper opinion...
Read more
3 people found this helpful
Report abuse

Marcus Owen Hawkins
5.0 out of 5 stars Highly recommended.
Reviewed in the United Kingdom on February 17, 2019
Verified Purchase
This is an Amazing movie, awesome acting , fantastic directing. A top 10 favourite in my movie collection 11/10.
I own it on DVD & blu-ray ✔👍.
Read more
One person found this helpful
Report abuse

Mary Naylor
4.0 out of 5 stars Not a very good film. Disappointing
Reviewed in the United Kingdom on October 26, 2019
Verified Purchase
This film started well, but disappointing as it went on.
Would not recommend it to my friends
Read more
Report abuse
See all reviews