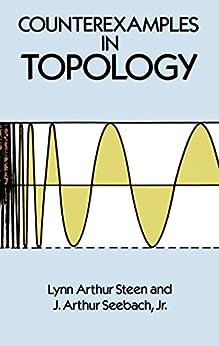 According to the authors of this highly useful compendium, focusing on examples is an extremely effective method of involving undergraduate mathematics students in actual research. It is only as a result of pursuing the details of each example that students experience a significant increment in topological understanding. With that in mind, Professors Steen and Seebach have assembled 143 examples in this book, providing innumerable concrete illustrations of definitions, theorems, and general methods of proof. Far from presenting all relevant examples, however, the book instead provides a fruitful context in which to ask new questions and seek new answers.
Ranging from the familiar to the obscure, the examples are preceded by a succinct exposition of general topology and basic terminology and theory. Each example is treated as a whole, with a highly geometric exposition that helps readers comprehend the material. Over 25 Venn diagrams and reference charts summarize the properties of the examples and allow students to scan quickly for examples with prescribed properties. In addition, discussions of general methods of constructing and changing examples acquaint readers with the art of constructing counterexamples. The authors have included an extensive collection of problems and exercises, all correlated with various examples, and a bibliography of 140 sources, tracing each uncommon example to its origin.
This revised and expanded second edition will be especially useful as a course supplement and reference work for students of general topology. Moreover, it gives the instructor the flexibility to design his own course while providing students with a wealth of historically and mathematically significant examples. 1978 edition.

Brianne
5.0 out of 5 stars Great Counterexamples
Reviewed in the United States 🇺🇸 on February 16, 2022
Verified Purchase
I haven't been able to read the entire thing, but this book is great for anyone interested in specific topological examples of concepts like the T_n spaces and so forth. Some of my personal favorites include the Cantor set and the Broom space.
Read more
One person found this helpful
Helpful
Report abuse

Jaron P. Melin
4.0 out of 5 stars A Really Cheap yet Great Resource for Topology
Reviewed in the United States 🇺🇸 on November 24, 2011
Verified Purchase
I really like the compactness of this book; that is, this book is the finite subcover for any arbitrary cover on the subject of Topology. Seriously, It gives almost all the major definitions which you would ever need, and it provides all kinds of nontrivial examples. Depending on your preference, the notation can sometimes be a little awkward, but it is neither incorrect nor ambiguous; that is, it is still correct and clear, depending on your understanding. Any mathematician ought to have this book in his collection for reference.
Read more
19 people found this helpful
Helpful
Report abuse

Josh Maddux
5.0 out of 5 stars Good book to have around
Reviewed in the United States 🇺🇸 on February 25, 2013
Verified Purchase
I purchased this (on my own, not as a recommended or required text) for an introductory undergraduate topology class I took around a year ago. It was rather difficult to navigate at first, but as the semester progressed I found it increasingly useful as a side reference. It is perhaps even more useful now, as I like to go back to it, maybe go a little further and check my understanding periodically. Overall, I am satisfied with the purchase, and would recommend as a side text to anyone who wants to learn the material really well, and/or maintain it for a little bit while focusing more on other areas.
Read more
10 people found this helpful
Helpful
Report abuse

JoB
5.0 out of 5 stars Exactly as the title suggests....
Reviewed in the United States 🇺🇸 on April 28, 2016
Verified Purchase
I am confident that most people will agree when I say that topology is a study that teaches us how counter-intuitive many results in Mathematics can be. This is an excellent book to search for counterexamples when testing a conjecture that you can't quite prove. Clearly written, and easy to follow.
Read more
8 people found this helpful
Helpful
Report abuse

Avander
3.0 out of 5 stars A somewhat useful reference and study help for topoloy
Reviewed in the United States 🇺🇸 on January 14, 2015
Verified Purchase
It was not as helpful as I hoped it would be studying topology. It did have some useful moments as a reference. Probably worth the expense I guess.
Read more
One person found this helpful
Helpful
Report abuse

Garrold
5.0 out of 5 stars Not a textbook, but a great survey
Reviewed in the United Kingdom 🇬🇧 on January 2, 2012
Verified Purchase
This book is a classic. I bought this book because I was trying to understand the range of topologies that exist, which this book achieves. It also systematically classifies topologies by their topological properties, and summarised the information in tables at the back of the book. This book is a not a text book, but I learnt a lot by browsing it.
Read more
One person found this helpful
Report abuse

Matheus Bellini
5.0 out of 5 stars Good book and good delivery/condition
Reviewed in Brazil 🇧🇷 on August 20, 2020
Verified Purchase
This book is an excellent reference for those who want to study in depth the basic concepts in General Topology. Since the focus is on distinguishing between definitions which intuitively correspond to similar principles (after all, the title is COUNTEREXAMPLES), this is a great guide to learn those definitions with much detail and get a good grasp on how they work, and the intricate connections between them.
Also, several Venn diagrams and reference charts (including a general reference chart) help find quickly any kind of counterexample and illustrate which implications are true or false.
Some examples are also illustrated for better comprehension, usually when describing weird neighborhoods.

I purchased this paperback edition (I don't know if there is a hardcover one), and it arrived on time and in mint condition. The book is well printed and well edited, easy to use and read.
Read more
One person found this helpful
Report abuse