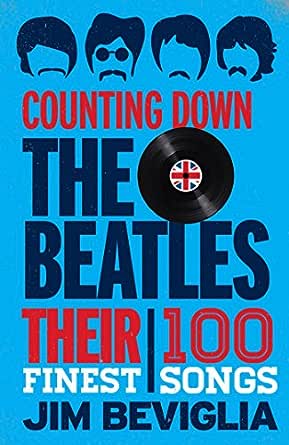 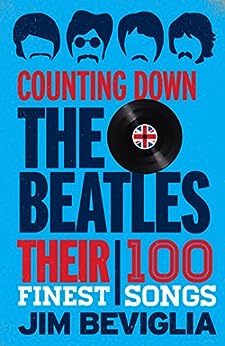 Counting Down the Beatles: Their 100 Finest Songs Kindle Edition

In author Jim Beviglia’s new book: Counting Down The Beatles Their 100 Finest Songs readers learn the how and why behind each top 100 song. Expertly researched and chronicled the authors’ delving in to the meaning behind each tune and their lyrics reveal the inner workings that led to the creation of each masterpiece. As a Beatles fan I was both amazed and surprised by much of what I read. The entire book is a penetrating and poignant breakdown about the creative surge that The Beatles possessed., Boyce McClain's Collectors' Corner --This text refers to the hardcover edition.

Amazon Customer
5.0 out of 5 stars I absolutely loved this book
Reviewed in the United States on April 17, 2017
Verified Purchase
I absolutely loved this book...a must for all Beatles enthusiasts. With that said, I certainly don't agree with the entire list, and I'd take issue with some of his reviews....but reading about the Beatle's music is always a wonderful thing and the author's effort in putting this work together and his appreciation for the music is unquestioned. Also.....the Beatles released only 200 plus songs in their brief career. Why not review all of them?
Read more
4 people found this helpful
Helpful
Comment Report abuse

Frankie
5.0 out of 5 stars Loved it!!!
Reviewed in the United States on June 17, 2017
Verified Purchase
Excellent book! Great writing!! Each essay is a wonderful insight into that particular song. I learned so much that I didn't know about the Beatles and their music. Awesome read!!
Read more
One person found this helpful
Helpful
Comment Report abuse

Forris B. Day
5.0 out of 5 stars Insightful information about the Beatles. A fun read.
Reviewed in the United States on April 17, 2017
This is the fourth book in the "Counting Down" series and by far my favorite mainly because the Beatles are one of my favorite bands. I certainly have my list of Beatles finest songs which differ from the songs Beviglia compiled but that is the fun of the book. He has a strict guideline that he follows and is explained in the beginning of the book. As a Beatles fan I consider myself somewhat informed on the band but I learned some really cool new information from this book. I particularly liked the essay about the song Help!. Read it.
I have the hardcover version. It has a complete index of the songs and albums mentioned so you can look up your favorite.

If you are a Beatles fan you'll be very happy with this book.

Bruce Hart
1.0 out of 5 stars What a mess
Reviewed in the United States on October 7, 2017
Jim writes a lot about 100 Beatles songs and provides some interesting facts if you don't know them already. But the premise of the book should probably be Jim's 100 favorite Beatle songs, in no particular order, and stick to notable facts on each. His assessments of songs are largely odd and lacking of insight beyond what is pretty obvious. I was expecting some kind of a justification for the ranking but it's rarely given. Jim describes qualities he likes about the songs but you're left wondering what he likes about one song more than another that would lead him to order them the way he does. Seems like a reasonable expectation for this kind of book. Instead he often walks the reader through excruciating detail of every moment of a song as if they haven't heard it or couldn't just listen to it. He frequently does this without making any real point, just a part by part description. The loud drums bring energy, the quiet guitar sounds sad is the insight. Stating what is obvious or worse, ascribing intentions by the artists that seem wildly speculative and beyond what they likely ever intended. For the author of several books about songs, he doesn't seem to really understand song writing, instead he writes what he admires about them. Interpretations of lyrics are laughably literal at times. "Nothing to do to save his life, call his wife in" he believes means that a house husband has literally died, not the obvious and genius play on words that it is. That Jim doesn't pick up on that and so many other instances demonstrates an alarming lack of lyrical insight that makes him seem unqualified to write this series. Can't wait to read Dylan interpretations, ha. There's no real explanation as you go from song to song as to why it was ordered where it is, so this reads like a random list of songs that leaves you kind of incredulous as to how the book was developed. Did Jim have an editor? For those cases that might be considered controversial rankings, he oddly doesn't really defend them. Spoiler alert, but I Don't Want to Spoil the Party and Octopus' Garden are higher on the list (a lot higher) than songs that are pretty well regarded. All good, he said this was his opinion and I was expecting he'd throw in some racy controversy, but you might expect he would acknowledge it and explain. But he doesn't. On so many levels after reading this book I was left thinking, WTF.
Read more
One person found this helpful
Helpful
Comment Report abuse

Bob Wilson
5.0 out of 5 stars Roll up!
Reviewed in the United States on January 7, 2018
Jim Beviglia offers another installment in his 'Counting Down' series books. The fun of the effort is the discussion and debate generated among the faithful, and Jim's eye for nuance. As a rock and roll historian, Jim provides many insights that should be new to even die-hard fans. More casual fans will also find the information interesting and informative. The series remains a favorite, and it will be fun to look for the next installment to come.
Read more
Helpful
Comment Report abuse