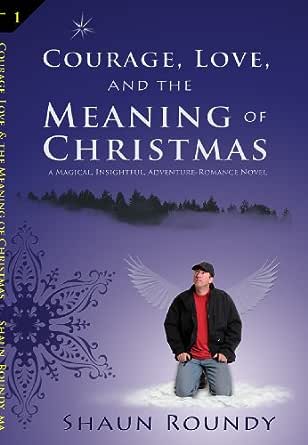 This title is not currently available for purchase
You've subscribed to Courage, Love and the Meaning of Christmas! We will preorder your items within 24 hours of when they become available. When new books are released, we'll charge your default payment method for the lowest price available during the pre-order period.
Update your device or payment method, cancel individual pre-orders or your subscription at
Your Memberships & Subscriptions
There was an error. We were unable to process your subscription due to an error. Please refresh and try again.
Share 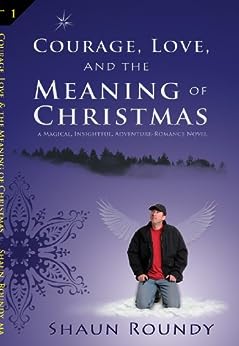 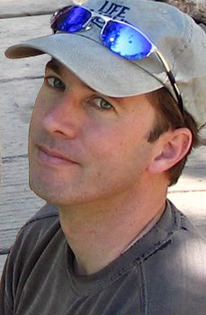 Courage, Love and the Meaning of Christmas Kindle Edition

by Shaun Roundy (Author) Format: Kindle Edition
Book 1 of 3 in Courage, Love and the Meaning of Christmas
See all formats and editions Hide other formats and editions
Read more Read less
click to open popover
Books In This Series (3 Books)
Complete Series 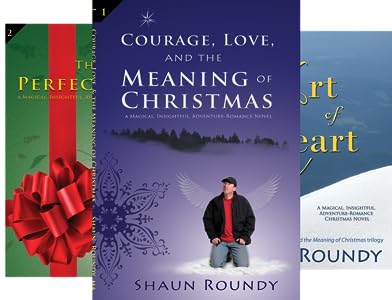 Courage, Love and the Meaning of Christmas
Kindle Edition
Page 1 of 1Start OverPage 1 of 1
Previous page
Next page

3.8 out of 5 stars
3.8 out of 5
21 customer ratings
How does Amazon calculate star ratings?
Amazon calculates a product’s star ratings based on a machine learned model instead of a raw data average. The model takes into account factors including the age of a rating, whether the ratings are from verified purchasers, and factors that establish reviewer trustworthiness.
Top Reviews

Running Deer
2.0 out of 5 stars Decent prose, but serious problems
Reviewed in the United States on January 10, 2012
Verified Purchase
Everyone from Utah gives this five stars; everyone from elsewhere gives it three, so I'll buck the trend and give it two. I might have given it three if the poor proofreading hadn't dropped it a star--the main character "pours" over a book, and the author does have some confusion concerning the difference between "its" and "it's," which really is inexcusable in a book that has been published.

My main problem is with the characters and all that happens to them. Each of the main characters always seems to have the nicest thought, the most pure motivation, and never seems to question any of the other main characters. This in itself isn't bad, but it just doesn't seem completely believable, and I can't put my finger on why. I had the feeling all along that the narrator was telling me the best possible version of a story, whereas someone else might have mentioned some things that he left out. This is basically a story of a likeable young man who's very insecure finding his confidence and security through a girl, not through himself. It also reads often as an excuse to throw in some philosophy here and there--really profound wisdom coming from the mouths and minds of kids in their early 20's. Things just never fit for me.

I actually only reached the end because I was curious to see if there would be anything redeeming in it, but as someone pointed out, it's an extremely abrupt and uncomfortable ending that leads into a sales pitch for book two, which costs $2 more than this first one. I really didn't care if the two main characters ended up together, and I cared even less for his two friends at college, especially the liar who was proud to be a liar.

All in all, this left me feeling empty and a bit dismayed that I had spent so much time on it for no really good reason. The writer has talent with his prose style, but the story-telling and the flow of the narrative and the character development all seemed forced and formulaic.
Read more
21 people found this helpful
Helpful
Comment Report abuse

Donna
4.0 out of 5 stars Interesting read
Reviewed in the United States on December 4, 2015
Verified Purchase
I liked how Spencer met a young lady who was down to earth and who made him feel special. Before that he struggled with shyness and low self esteem. I like how he asked God for help.
Read more
Helpful
Comment Report abuse

Sue's Reads
4.0 out of 5 stars gotcha
Reviewed in the United States on January 3, 2014
Verified Purchase
The first couple chapters were a bit slow, but overall I really enjoyed this book. In some places I felt it really talked to me. I thought I would read it again, but when I got to the end only to find out it is not the end I was very disappointed.
Read more
Helpful
Comment Report abuse

gma
5.0 out of 5 stars Great book...can. hardly wait to read t hers
Reviewed in the United States on January 30, 2013
Verified Purchase
Would recommend to all that like a little romance along with a moral behind the story.looking forward to reading the others.
Read more
One person found this helpful
Helpful
Comment Report abuse

girlrunning
3.0 out of 5 stars Three Stars
Reviewed in the United States on December 21, 2014
Verified Purchase
just started reading, its a little slow getting started but hopefully it will get better
Read more
Helpful
Comment Report abuse

RALPH PATERNOSTER
4.0 out of 5 stars Meaning of life
Reviewed in the United States on May 12, 2013
Verified Purchase
Very good book. Had some problems with pages being mixed up in sequence and possibly some missing buy you didn't miss much. Also editing is terrible. However this book makes you think about your own life and what you feel is the meaning of life as discussed in the book.
Read more
Helpful
Comment Report abuse

Amazon Customer
5.0 out of 5 stars True meaning
Reviewed in the United States on November 25, 2013
Verified Purchase
This book clarifies that everyone's life meaning is different. One thing that is constant is courage to love and be love is important.
Read more
Helpful
Comment Report abuse
See all reviews from the United States

Kindle Customer
3.0 out of 5 stars Light read
Reviewed in the United Kingdom on December 19, 2014
Verified Purchase
After some heavy reading I was looking forward to something lighter and this was that. It tells the story of University student Spencer who goes home to his grandmother for the Christmas holidays where he meets Annetta who changes him in ways he could never have imagined

I enjoyed this book which makes no pretence at being anything other than a fun read for Christmas. Rather implausible at times with an ending that leaves you wanting to know what happens next.
Read more
Helpful
Sending feedback...
Thank you for your feedback.
Sorry, we failed to record your vote. Please try again
Report abuse

hev
4.0 out of 5 stars hmmm
Reviewed in the United Kingdom on March 5, 2013
Verified Purchase
bit mills and boon for me in fact quite a few of the free books i have had are. also do not need lots of words to reveiw
that is why i don't always bother
Read more
Helpful
Sending feedback...
Thank you for your feedback.
Sorry, we failed to record your vote. Please try again
Report abuse

Incamum
3.0 out of 5 stars Courage, Love and the meaning of Christmas
Reviewed in the United Kingdom on January 29, 2013
Verified Purchase
This was an ok read, a bit slow getting going but still good to read. An enjoyable and easy read.
Read more
Helpful
Sending feedback...
Thank you for your feedback.
Sorry, we failed to record your vote. Please try again
Report abuse