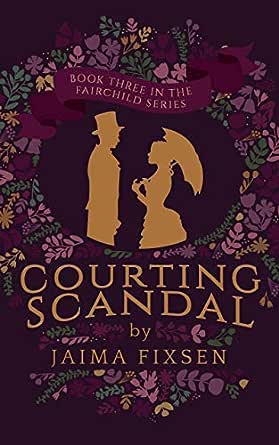 You've subscribed to Fairchild! We will preorder your items within 24 hours of when they become available. When new books are released, we'll charge your default payment method for the lowest price available during the pre-order period.
Update your device or payment method, cancel individual pre-orders or your subscription at
Your Memberships & Subscriptions
There was an error. We were unable to process your subscription due to an error. Please refresh and try again. 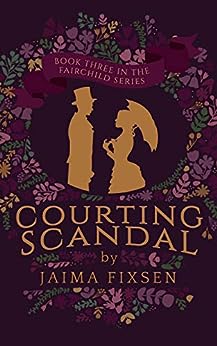 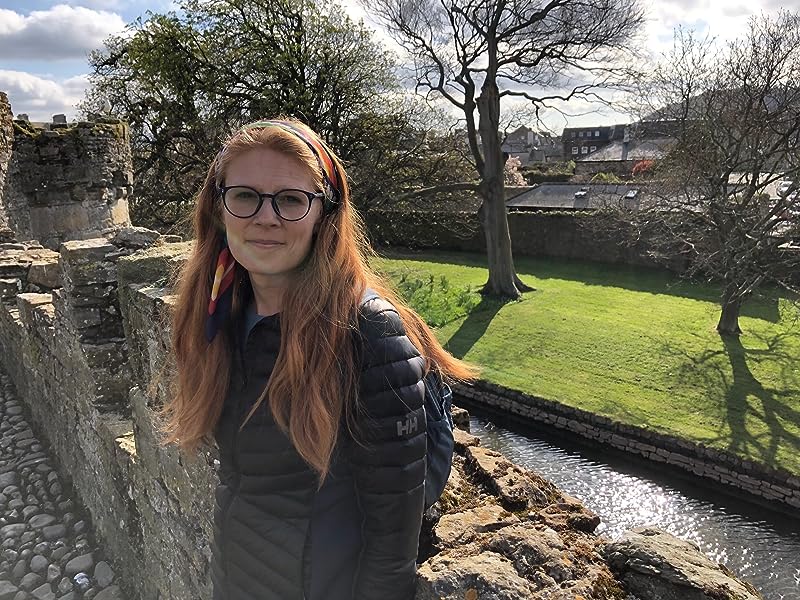 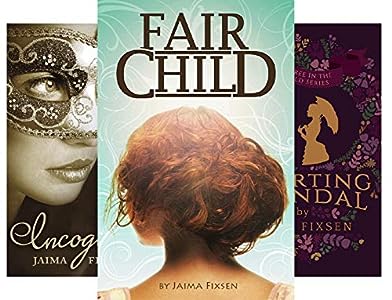 Jaima Fixsen lives in Alberta, Canada with her handsome husband and clever children. Mostly she just tries to keep up. --This text refers to the paperback edition.

4.2 out of 5 stars
4.2 out of 5
127 global ratings
How are ratings calculated?
To calculate the overall star rating and percentage breakdown by star, we don’t use a simple average. Instead, our system considers things like how recent a review is and if the reviewer bought the item on Amazon. It also analyzes reviews to verify trustworthiness.
Top reviews

Yay! Jasper got his happily ever after too! I've really enjoyed this series. I want more. And this one just seemed perfect for Jasper. Fun-loving Jasper and his lovely, actress. Match-made in heaven!

This story could seem more scandalous than the other two books, but it is still clean. Just the usual things said before one gets married. Quite humorous I think. It's hard to wait. I'm sure some people would see this as realistic. The struggle before marriage to keep things pure.

And the whole family was involved in this story. I love when we get to revisit characters from other books in the series and see what they are up to. And Fixsen still gives them some storyline in this book. They aren't forgotten as they can be in other series. I really like that.

lark
4.0 out of 5 stars Just saying I liked this story. A lot.
Reviewed in the United States on November 4, 2015
Verified Purchase
First, I can guarantee this novel works very well as a standalone. Turns out I'd read the previous two books some time ago but had forgotten everything. (I only remember the novels I really love or really hate, and those two didn't make the cut in either direction.) So there. You'll be just fine without having read the first two. I liked this one.

There once was a girl in want of thirty pounds. Thus began the saga of Laure Seraphine Edouard Lecroy-Duplessis/Laura Edwards/Gemma Holyrood. Laura, daughter of a French comte murdered during the Terror, escaped to England with her mother and brother. Penniless, they were spurned by her uncle, the Duke of Saltash. (He's a nasty piece of work.)

Laura and her mother work as seamstresses for a theater company; Laura's brother, Jack, longs to become a physician; Laura needs that thirty pounds to provide for Jack's education; and Gemma Holyrood is born...star of the stage! This is where Rushford comes in. He courts her nightly in the green room with no success. No man succeeds. Gemma smiles and flirts...that's it. But Jasper Rushford is our persistent hero. Jasper is a good person; he's kind, witty, good-natured, and the soul of honor. He's on the outs with his parents, adores his half-sister, Sophy, and likes her husband, Tom.

The whole famdamly comes together when Tom invites Jack to Suffolk with a view toward Jack becoming the local physician. Jack prevails upon Laura to visit, Jasper's in attendance too, natch, and things get interesting.

The story continues apace. Saltash rears his ugly head. You know his type ~ wouldn't give his destitute sister-in-law's family a pence, but now he's pitching a fit because Laura took to the stage. That might ruin his daughter's debut. So, he becomes increasingly threatening...dangerous, actually. What a pig. But Jasper will save the day, I just know it!

The story moves briskly along; the dialogue is crisp, much of it witty; pleasing narrative; only a few anachronisms strewn like the occasional rock on a path...stubs my sensibilities but no damage done. All in all, a good tale!

CA
3.0 out of 5 stars Oh, my 3.5 stars!
Reviewed in the United States on November 27, 2015
Verified Purchase
I am a Fixsen fan, I will probably read everything she writes, and Fairchild continues to be one of my all time favorites. I gave this a mixed review because I am a biased Fixsen fan, I love the Fairchild family, I love the prose, but the story had too many absurd elements to completely win me over. So I added and subtracted stars as I went, and came up with my final rating.

I still love how Fixsen writes about human relationships and this was my draw to her first book – not so much the second book, which did not leave a long-lasting impression. I have loved Jasper since the start when he defended and loved his bastard sister despite her origins which were a source of pain for the entire family. I loved him even more in this book when his sense of honor and the truth of his moral standards comes to light. I forgave him his animosity towards his parents, which began when he was a child and his governess became pregnant by his father - Jasper perceived her subsequent departure as abandonment. Young kids cannot understand the complexity of adult relationships, so it is no wonder he harbored such resentment toward his parents for so long. I loved how Fixsen resolved this for him. Georgiana, Lady Fairchild, has also remained one of my favorite characters – how Fixsen transforms her from a cold, arrogant and wronged woman to a forgiving, loving, painfully introspective mother and wife was brilliant. Her final scenes with her husband and her son brought me to my knees. 5 stars

I was just so happy to be reading about the Fairchilds again that I gave it an extra star just for that. Call me crazy but Fixsen did such a wonderful job creating a family and their complex relationships – that remains my favorite part of this series, and was the main reason I hung in there with this book. 5 + 1 = 6 stars

SPOILERS, SOME OF THEM BIG:

Otherwise, I thought it was fraught with predictable and somewhat absurd circumstances. At the onset, a well known actress is abducted and thrown into a closet so that our h can go on stage and become a star – no consequences, no arrest, although it sounded like assault to me. The ruse – I lost track of how many times I shook my head. It just didn’t seem well thought out, and it did not score high on the intelligence meter for either Jasper or Laura. I didn’t buy Laura’s ability to use disguise so effectively –it seemed much too convenient that no one saw through her except 2 key characters, and without much effort. The ending – the h saves herself from a truly frightening ending by using her acting chops on what seems to be very conveniently placed patsy, and that again didn’t take much effort. This really detracted from the scene, and turned it into a farce. I thought this beautiful story deserved better – that’s all I’m saying. Subtract 2.5 stars.

I probably wouldn’t have rated this as high as I did (originally 6 stars) if I hadn’t read Fairchild. I don’t think Incognita added much to this story, particularly as I didn’t remember much of it. But to give it its due, Courting Scandal continues the poignant journey of the Fairchild family as they work through their pain for mistakes from the past. I don’t see this as a stand-alone book – all of that would have been lost on me without the depth of the back story. I don’t recommend reading this without at least reading Fairchild first. For that, the journey will be worth it.
Read more
27 people found this helpful
Helpful
Report abuse
See all reviews

pinkygirl
5.0 out of 5 stars An engaging Regency romp
Reviewed in the United Kingdom on May 28, 2019
Verified Purchase
This is an entertaining, well-written period romance, set in the dual worlds of upper class country living and the London stage. Ms Fixsen has certainly captured the Regency period - although there are a few jarring details (Canadian/American spellings - such as 'color' and 'neighbor' - or turns of phrase; the reference to an actress's daughter having a toothbrush, despite these only being afforded by the rich and upper classes at the time and poorer people cleaning their teeth with a small cloth; and, the inaccurate French spoken by a character who is supposed to be French herself - "le petite mort" instead of instead of "la petite morte", for example); however, she otherwise accurately depicts the language and conventions of the time. She has stated in her bio that she is a fan of Georgette Heyer, and Ms Heyer would, I think, be proud of such an homage to her own writing. As a modern reader, it's the witty banter and badinage between the two main characters that makes the story so appealing; and although this is the third story in series, it stands alone as an enjoyable and engaging read. An almost perfect five stars.
Read more
Report abuse

B. Haines
5.0 out of 5 stars The best in the series
Reviewed in the United Kingdom on January 19, 2017
Verified Purchase
Ms Fixen has become herself. Her flavour is her own despite her roots in Heyer and Sheridan. The storyline is unique as is her hero and heroine although one can see that as the plot complexity begins to approach Heyer the farce is quite Sheridan. The language is modern when compared with both Heyer and Sheridan.

A delight for me as a longtime afficianado of Heyer. Loved the bit where the Duke gets his comeuppance.
Read more
2 people found this helpful
Report abuse

Kindle Customer
3.0 out of 5 stars Ok regency series
Reviewed in the United Kingdom on December 27, 2017
Verified Purchase
I have enjoyed this series but was rather put out by the fact that the first 2 books I was able to read through Kindle unlimited, yet this 3rd and final book of the series was not available this way and I had to pay £3.99 to enable me to finish the series. I have some disabilities and spend a great deal of my time reading so Kindle unlimited makes this financially viable. It wouldn't be so bad but I found this one the weakest of the 3 and the least believable.
Read more
One person found this helpful
Report abuse

Kindle Customer
5.0 out of 5 stars Excellent
Reviewed in the United Kingdom on June 11, 2019
Verified Purchase
Absolutely loved this entire series, the characters pop up in each book, but the settings are so different, the stories linked but individual. Well worth the read.
Read more
Report abuse