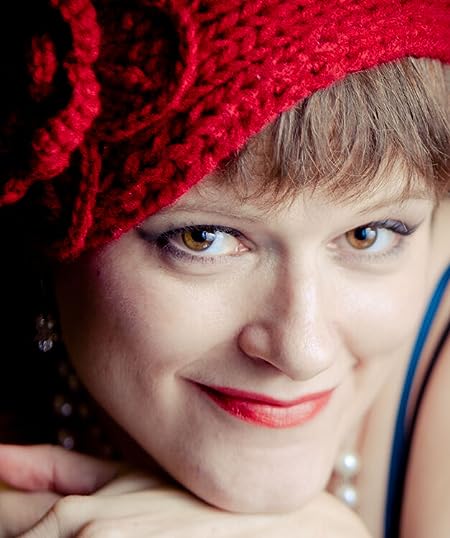 She was born in Texas and grew up in Germany. At age 12, she penned her first novel, a one-page murder mystery. (The gardener did it.) By age 17, she had finished two full-length sci-fi novels.

After earning her bachelor's degree in English/Writing, Courtney worked as a missionary in Germany for six years. She then returned to Oklahoma City to begin writing full-time. As of 2018, she has completed twelve novels in multiple genres and one anthology of fantasy short stories.

Courtney lives with her husband, their daughter, their cat, and an assortment of cross-cultural doohickeys. She blogs at courtcan.com and connects with readers and fellow writers as @courtcan on Twitter. 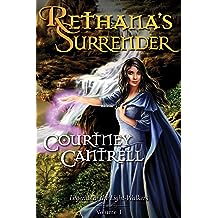 Rethana's Surrender (Legends of the Light-Walkers Book 1) Jun 24, 2012
by Courtney Cantrell
( 37 )
$2.99
Rethana Chosardal’s life in hiding is over, and she has no one but herself to blame. A foolish choice leaves her in the power of the same vengeful clerics who slaughtered most of her family when she was but a child. Worse, the soldiers also seize her best friend and her frail little sister.

Allasin, the clerics' leader, recognizes in Rethana the Blessing of comori, magical energy that can manipulate the elements. Rethana has always craved the power her birthright can bring, but Allasin will only teach her if she serves him in intrigues she cannot hope to understand. Yet this cold, cruel adversary gives her glimpses now and then of a warmer soul--of a master she could fall in love with.

Rethana is torn between two men: the hometown protector who loved her as a girl and the conqueror who loves her as a woman. As civil war threatens, Rethana must choose between her power and her past. Knowing that a reckless act has already cost her the life she once loved, this new choice may well tear her fragile heart apart. How much more will she surrender to protect her precious, dying sister?

Rethana's Surrender is the first book in the Legends of the Light-Walkers. Approximately 100,000 words.
Read more 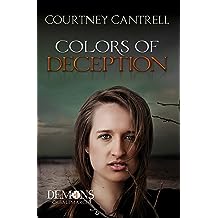 This is not how Holly Idaho imagined life at a Christian university.

Just two weeks into her sophomore year and her life is already unraveling. Her closest girlfriends, Anne and Celia, are hiding something. Peter, her only guy friend on campus, won’t tell her why he’s acting weirder than usual. Owin, who has been like a brother to her, issues cold challenges to her faith.

Holly tries to be patient, but all this rejection leaves her feeling isolated. A few anonymous pranks only make the loneliness worse. But then an unseen intruder terrorizes her at her parents’ house, and Holly realizes: There is more going on here than strained friendships and practical jokes. There is something to fear.

Then Peter stuns her with the truth: a demon is stalking her, feeding her doubts and fears in a final play for her soul. It’s Peter’s God-given task to protect her--but he’s running out of options.

Holly’s faith refuses to sustain her. Her friends succumb to forces beyond her understanding, and Evil feels a lot less evil. As the demon closes in, Holly faces a horrible choice between a heaven she fears and a hell she never imagined possible.

Colors of Deception is the first book in the Demons of Saltmarch trilogy. Approximately 80,000 words.
Read more
Other Formats: Paperback 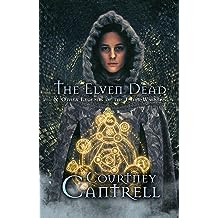 The Light-Walkers: an otherworldly people of magic, mystery, and soul-rending purpose.

The Light-Walkers: arrogance, love, desperation, and a fierce determination to protect their magical birthright and their world--even if it means destroying ours.

Playful sorcery that brings down nations. The fear factor in a magical venom cocktail. Undead, astral-projecting elves. In five short stories and one novella, Courtney Cantrell offers fresh glimpses into the world she uncovered in Rethana’s Surrender, Rethana’s Trial, and The Dying of the Light. New characters, old friends, and base traitors populate this collection. Delve deep and sink your teeth into the marrow of the Light-Walker world. If the dragons don’t grab you, the undead elven soldiers will.

Just don’t turn your back on them.
Read more
Other Formats: Paperback 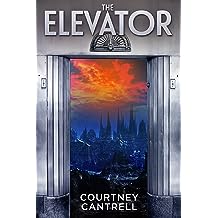 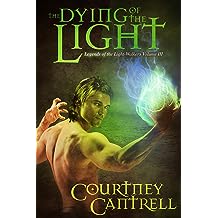 The Dying of the Light (Legends of the Light-Walkers Book 3) Jun 29, 2015
by Courtney Cantrell, Steven Novak, Jessie Sanders
( 2 )
$3.99
Rafe Skelleran is losing his mind. Weird nightmares ruin his sleep and dog his waking hours. Even the booze doesn't help anymore. And the worst part of going crazy is he doesn't even know why it's happening.

In the midst of his descent into madness, a woman shows up on his doorstep, all curves and feisty foreign accent. This dream girl is real enough, but her babble about ancient wars and lurking enemies is the stuff of fantasies. Her rantings gain the weight of reality when an enemy arrives with an arsenal of otherworldly powers and tries to murder Rafe. Fleeing the destruction of his home, blood on his hands, Rafe realizes that if he wants to get out of this alive, he’s going to have to stick with a woman who’s possibly crazier than he is.

Besides, she knows about his dreams. She knows the green-eyed crone whose nightly pleas are driving Rafe insane. She says the old woman is real and that she can take Rafe to her. And Rafe can’t pass up the chance to find out the truth.

Hijacked to a strange world where he is surrounded by powerful, dangerous allies, Rafe soon realizes he’s no safer with these people than he was on his own. Every time he turns around, someone insists he’s not who he thinks he is. Every time he turns around, someone wants him dead. On the run with what seems the least of many evils, Rafe doesn't have a single person in this strange land he can trust.

Even worse, he feels a dormant, volatile power knocking from within, urging him to let his magic loose. He must unlock it before facing his darkest enemy, for without it he can't possibly survive. It's that or accept an allegiance that will give him the worlds...if he's willing to sell the last little bit of himself he has left.
Read more
Other Formats: Paperback 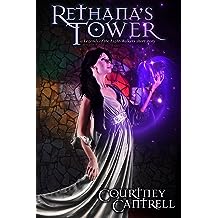 Rethana's Tower: a Legends of the Light-Walkers short story Jun 29, 2014
by Courtney Cantrell, Steven Novak
( 1 )
$0.99
Before the rumors of war and conscription by vengeful clerics destroyed her idyllic life in Rethana’s Surrender, Rethana Chosardal lived comfortably as a bellringer’s daughter. With dark times far behind her family and darker times of the future unknown to her, Rethana plays with the magical powers that are her birthright.

And like any willful girl with more power than sense, she gets up to mischief.

A nighttime intruder to her bell tower, intent on mischief of his own, has Rethana more than confident she can stop him. Not just stop him, but humiliate him. Like any proper mischief, though, it won’t be easy. After all, dodging her crotchety great-grandmother and nearly falling to her death aren’t exactly her idea of fun.

But without this one night of magical pranks, the events of Rethana’s Surrender and Rethana’s Trial might never have happened. Read the light-hearted tale that started it all during one moonlit, roguish climb up “Rethana’s Tower.” 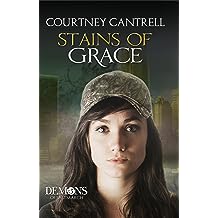 Stains of Grace (Demons of Saltmarch Book 3) Feb 9, 2014
by Courtney Cantrell
( 3 )
$3.99
Anne Waylock thought she was safe. Safe from the madness of demons and the auguren who hunted them. Safe from her tumultuous feelings for the troubled Owin Moran. Safe from the pain of her best friend’s betrayal. Four months ago she ran away from it all, and she never planned on looking back.

But when Legion, a mutant demon terrifying and dangerous even to other demons, appears in her new refuge, Anne finds herself forced to flee right back to the people she ran away from.

As if Legion weren’t enough, a normal demon hunts Anne as well, ready to devour her body and soul. Peter, normally the voice of reason and sanity in the face of the supernatural, has broken with reality. The auguren themselves are confused and frightened of Legion’s power and the changes it has wrought.

Even under guard from those trained and specially empowered by God to fight demons, safety is an illusion.

To her growing horror, Anne realizes the only way to set earth, heaven, and hell right is another trip to the demon realm of Saltmarch. The dual threat of insidious demons and Anne’s own weakness leaves her wondering if redemption might be the most painful, and most dangerous, option of all.

Stains of Grace is the third book in the Demons of Saltmarch series. Approximately 80,000 words.
Read more 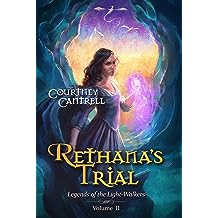 Rethana's Trial (Legends of the Light-Walkers Book 2) Dec 14, 2012
by Courtney Cantrell
( 18 )
$3.99
In Rethana’s Surrender, the pulse-pounding opening novel of Legends of the Light-Walkers, the gathering of an army shattered Rethana Chosardal’s comfortable life and thrust her into the arms of one who could be either tormentor or savior. But just as she began to feel safe with the clerics who once hunted her family, new trials wrenched her from even this thin protection.

Now unknown enemies have captured her and torn her from the side of her dying sister. Once again tossed on the waves of war with no safe harbor, Rethana has nowhere to turn. The elusive, nomadic Soldan claim her as part of their ancient prophecy to overthrow the malicious rule of an evil emperor. To entice her into their cause, the Soldan offer to feed her insatiable hunger for magical knowledge. Is Rethana willing to pay the price they ask?

Before she can decide, another menace sweeps down from the icy north. Under the relentless scourge of the diabolical Skardi, it becomes clear that the petty civil war between Soldan and the clerics places the whole nation in peril. There is no hope but an alliance...if only either side would heed Rethana’s warnings.

Rethana stands alone in the midst of trial and treachery, the powers of two great monarchs arrayed against her. Even the strength of the Warlord Allasin, her master and possible beloved, is out of reach. Abandoned by old friends, beset by new enemies, Rethana stands at the very heart of her homeland, forced to make her last stand.

Though the fate of Rethana’s sister remains unknown and the whole world rests upon her shoulders, Rethana will bend but not break. Only this iron determination can see her through Rethana’s Trial.
Read more 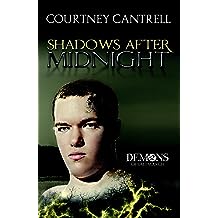 Shadows after Midnight (Demons of Saltmarch Book 2) Sep 28, 2011
by Courtney Cantrell
( 5 )
$3.99
Peter Townsend is not normal and doesn’t play well with normals. He belongs to the ancient line of auguren, demon hunters with only one goal: Protect ordinary humans from their demonic tempters. But last year, protecting Holly Idaho shattered Peter’s world.

When Dante Mullins, the demon hunting Holly, spirited her away to the infernal realm of Saltmarch, Peter went through hell to save her. Falling in love with her wasn’t part of the plan. Neither was leaving Dante alive.

Now Dante is back, and Holly is missing. Holly’s friends Anne and Owin insist on joining Peter in the furious search. But when a new demon enters the fray, one that makes Dante look angelic, its nightmarish power threatens to consume them all.

The loyalties of friendship might be more help than Peter can deal with. This time, saving Holly might just cost him his soul.

Shadows after Midnight is the second book in the Demons of Saltmarch trilogy. Approximately 70,000 words.
Read more
Other Formats: Mass Market Paperback