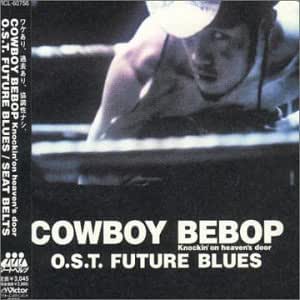 Brian B
5.0 out of 5 stars Bought for 1 song
Reviewed in the United States on April 20, 2017
Verified Purchase
Only picked this up so I could have the proper version of "Rain" (since the "Soundtrack" has the male vocal), which is the secret track at the end.

However, I do love all things bebop, and the Seatbelts always amaze me, so I have no problem having the other jams on the disc.

Being the soundtrack for the movie, it is not quite as solid as some other discs, but perhaps more diverse.

Definately worth the purchase, even though I hate that they spread out the songs to force you to buy all the discs.

ninjasuperstar
4.0 out of 5 stars Brings the Cowboy Bebop soundtracks to new places and then back home.
Reviewed in the United States on April 13, 2007
Verified Purchase
Cowboy Bebop - Future Blues

For me, the greatest appeal of the first Cowboy Bebop disc (O.S.T. 1) is that all of the pieces (except the abysmal "Rain") work well together and form a cohesive whole. No Disc approaches the sounds of Cowboy Bebop from multiple perspectives and from various bands. There are more actual songs (music with lyrics) on No Disc than on O.S.T. 1. At first, I didn't like this approach, but the music grew on me with time. Not every piece or song is as complete as those of O.S.T. 1, but there is plenty of great music to write about. The third original soundtrack album, Blue, follows No Disc's lead and offers more songs and fewer instrumental pieces. As on No Disc, Blue has some hits and misses. Future Blues is a fine finale to this soundtrack series. I take a quick peek at each track below.

"24 Hours OPEN" is hilarious, if disturbing. The piece sounds like a violent crime occurring at Chucky Cheese, and someone left the security camera on. The goofy elevator music is mixed with random gunshots, people screaming, and sirens blazing. The worst, however, is when the people stop screaming, because you know everyone's dead. Nice way to start your album.

If you sped up the tempo of the theme song from "The Love Boat" and inserted a rap over the top, you'd have something similar to "Time to Know--Be Waltz." Sounds crazy? Sounds great!

"Clutch" is a fast jazz piece with a lot of great solos. Expect nothing less from The Seatbelts.

"MUSAWE" is a jam session, and like most jam sessions, it doesn't really go anywhere, but I like it anyway.

"Yo Pumpkin Head" is a syncopated big brass exploration. The energy of the piece is great in itself, but I must admit that this is the first piece of music I've ever heard that incorporates a crowd as a musical instrument. Must be heard to be appreciated.

I've hated prior Cowboy Bebop songs featuring the vocals of Steve Conte. "Diggin'," however, is a vehicle that finally works well with his otherwise thin, weak voice. The blues-country guitar work rocks, indeed. The song gets a bit long in the middle, but it's still a good one. The lyrics are good and in keeping with the themes of the Cowboy Bebop series.

"3.14" is a Japanese a cappella song featuring the girl-like voice of Aoi Toda. It's not a complete piece, is in Japanese, and so it has a novel quality to it that doesn't last.

"What Planet Is This" is a fast, rock jazz piece with a fantastic sax solo. The Seatbelts don't disappointment here, and they mix it up in the middle to give the piece shape.

"7 Minutes" is a genre-blasting tour de force. It's almost impossible to characterize. I suppose the word "fusion" comes to mind. Great piece all around.

The piano work in "Fingers" drives this spacey sounding. There's also a kalimba (finger piano) at work here, which offers a twinkling accompaniment. The chorus is underplayed and gives the piece some sway.

"Powder" is a chorale song and doesn't interest me much. I appreciate the talent that went into the performance, but the song doesn't strike me.

"Butterfly" features the sultry vocals of M. The accompanying jazz guitar and piano work well. It feels like a complete song, which doesn't always happen on Cowboy Bebop soundtracks.

Steve Conte's vocals are so-so in "No Reply." The song sounds like an early 1990s ballad when everyone started rejecting the synthesizer and started using full, live orchestras. It's too sappy for my taste.

"Dijurido" doesn't really go anywhere. The vocals are rather flat. In the middle of the piece, the strings explore a tune that reminds me of Disney's Fantasia when the splinters of broom are being reanimated into many smaller brooms.

"Gotta Knock a Little Harder" starts slow, but it's worth the wait for the blues piano and awesome vocals to kick in. Rockin' piano songs are rare nowadays.

I don't see the point in "No Money." It's essentially a half-sung poem.

Mai Yamane's take on "Rain" is vastly superior to Steve Conte's rendition on the first Cowboy Bebop soundtrack. When Conte sings it, I find the song impossible to listen to; when Yamane sings it, I believe her.

Future Blues is a nice conclusion to the Cowboy Bebop soundtrack series. It's amazing that a 26-episode anime could give birth to such varied, experimental, and inspired music. I recommend buying Future Blues used. The retail price is robbery. But do get this album if you are a Cowboy Bebop or The Seatbelts fan.
Read more
11 people found this helpful
Helpful
Comment Report abuse

Esol
5.0 out of 5 stars Just Awesome
Reviewed in the United States on July 24, 2012
Verified Purchase
I've never regretted buying a Cowboy Bebop CD. It's been literally 7 years since I bought this CD (I'm currently catching up on my reviews), and Cowboy Bebop has in many ways become the gold standard by which I judge other music. Every now and then a song will pop up on Pandora and I'll think, "that's better than good, it's Cowboy Bebop good." Yoko Kanno is a visionary, and the music is true art. But if you're reading this you probably already know that. Enjoy.
Read more
3 people found this helpful
Helpful
Comment Report abuse

Blue Crow
5.0 out of 5 stars great value
Reviewed in the United States on September 11, 2009
Verified Purchase
this cd contains two hard to find bebop soundtracks in one at a very reasonable price. a great value for any bebop fan
Read more
Helpful
Comment Report abuse

Damien Booker
4.0 out of 5 stars Cool...but lacking.
Reviewed in the United States on April 10, 2014
Verified Purchase
I love Cowboy Bebop from the series, to the movie and especially the music. The music is cool...but lacking some of the other songs from the movie like Ask DNA or Cosmic Dare. Despite that, I'm glad to have such an awesome CD.
Read more
Helpful
Comment Report abuse
See all reviews

山口
4.0 out of 5 stars よかった
Reviewed in Japan on September 12, 2015
Verified Purchase
What planet is this?! なんかは最高ですね。
しかしなぜかOPのあの曲は別のCDに収録されています。
Read more
Report abuse
Translate review to English