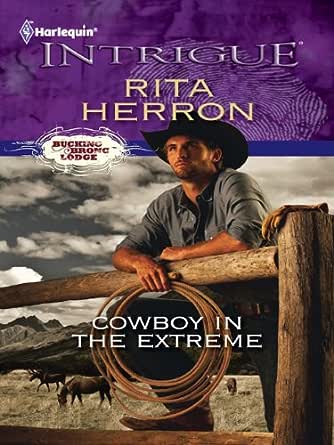 You've subscribed to Bucking Bronc Lodge! We will preorder your items within 24 hours of when they become available. When new books are released, we'll charge your default payment method for the lowest price available during the pre-order period.
Update your device or payment method, cancel individual pre-orders or your subscription at
Your Memberships & Subscriptions 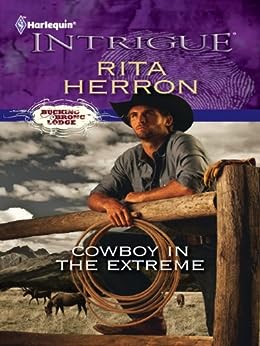 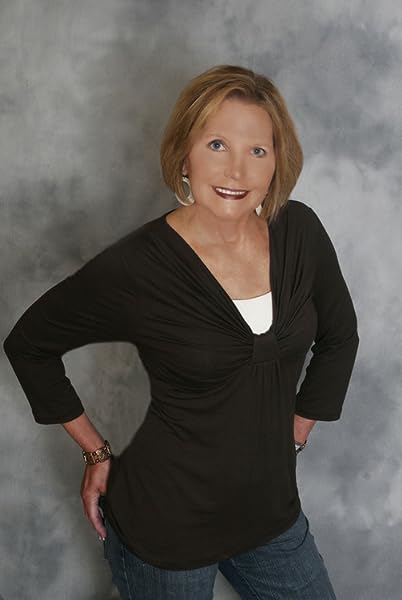 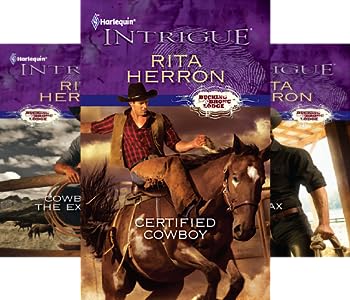 Award-winning author Rita Herron wrote her first book when she was twelve, but didn’t think real people grew up to be writers. Now she writes so she doesn’t have to get a real job. A former kindergarten teacher and workshop leader, she traded storytelling to kids for writing romance. She lives in Georgia with her own romance hero. She loves to hear from readers, so please visit her website, www.ritaherron.com. --This text refers to an out of print or unavailable edition of this title.

"What?" Brandon Woodstock's heart began to race as he heard the worry in his best friend's voice. "How?"

"I don't have all the details yet," Johnny said, clearly agitated. "After the rodeo, I went to see him in prison and gave him the number of a P.I. I hired to investigate his case."

"And he accepted your help?" Brandon asked. "I thought he hated both of us." Brandon sank into the desk chair at the Bucking Bronc Lodge's office wishing he was home on his own spread. He would be in a few hours. He couldn't handle being on the ranch when Johnny's sister, Kim, was here.

Kim, his first love, his only love.

That hurt the worst….

"Not at first," Johnny said. "But I convinced him to take the P.I.'s card and talk to him."

"Now you believe he was innocent of murder?"

The three of them, Carter, Johnny and him, had been inseparable as kids. Kim had tagged along, the tomboy little sister, and aggravated the hell out of them.

Until she'd hit her teens and become a raging beauty. He'd fallen for her, then slept with her, much to Johnny's consternation, although eventually Johnny had accepted them as a couple.

Then he'd made the worst mistake of his life by leaving her for another woman, one he'd thought would help him climb from the gutter of his trailer-park-trash past to success.

And it had worked initially. But then Brandon realized he'd crawled into bed with a snake and had been running from the venomous bite ever since.

Still, Carter had wasted no time. He'd stepped in to fill his shoes.in Kim's bed.

That affair had ripped apart their friendship.

Soon after, Carter had been arrested and convicted of murder. Carter had begged him and Johnny to lie and give him an alibi. Their refusal to perjure themselves had cemented the end of their friendship with Carter.

Johnny cleared his throat. "After seeing the way Rachel's ex bought off the cops and framed her for trying to kill him, I started thinking that someone could have framed Carter."

"So did the P.I. turn up anything?" Brandon asked, getting back on track.

"No, he didn't have time. Carter met with him once and told him about this woman he claims he was with the night of the murder. Carter recognized her in one of the photos of the rodeo."

The newspaper featuring the rodeo was spread on Brandon's desk. He'd tried to avoid looking at the picture of Kim and her little girl, Lucy. It hurt too damn much.

He steered his mind back to Carter. "This woman was at the Bucking Bronc Lodge?"

"In the stands," Johnny said. "She's Native American. Carter claimed they had a one-night stand, and that he saw her the night of the murder."

"Did Troy find her?"

"I don't know. Troy was working on locating her, but two days after he visited Carter, Troy was found dead."

The air in Brandon's lungs tightened. "He was murdered?"

Brandon chewed the inside of his cheek, contemplating everything that had happened. "Maybe he was onto something that got him killed."

"My thoughts exactly." Johnny's footsteps clattered, and Brandon realized he was pacing.

Anxious himself, Brandon went to the bar in the corner, poured a shot of whiskey and swirled the amber liquid in the glass. He hated to distrust Carter, but before the arrest five years ago, Carter had been drinking too much, constantly skirting trouble. He'd even blacked out a few times and let his rage rule his actions.

The way Carter had attacked him a few times replayed through Brandon's head, and more doubts nagged at him. "Or maybe Troy found out Carter committed the murder, and Carter had someone kill Troy."

Johnny sighed. "Or maybe Carter thinks Troy died because of him and it's time he found out the truth."

"Then he's looking for this woman?"

"Probably," Johnny said. "And he has to be desperate. I raised his hopes and so did Troy. And now Troy's dead. That's enough to do a number on anyone."

"Dammit. We both know how Carter gets when he's bottled up with anger." The very reason both of them had questioned Carter's innocence five years ago.

"Yeah, I know." Johnny sounded frustrated. "I just wanted to warn you. Two other prisoners escaped and a guard was wounded. His weapon was stolen."

Brandon cursed. "So Carter may be armed, and the cops probably have orders to shoot to kill."

"That about sizes it up," Johnny hissed. "Carter has to be scared. Whether he went willingly or not, he's on the run, he's pissed, he needs help, and he—"

"May show up here." Brandon downed the liquor. Hell, Carter would probably blame him for this trouble, too. He removed his gun from the desk drawer where he'd locked it and stuffed it in the back of his jeans.

If Carter came looking for a fight, Brandon would be ready.

Kim Long tried to ignore the rapid tapping of her heart as her four-year-old daughter, Lucy, taped the photos of the rodeo onto her bedroom wall. Ever since the rodeo, Lucy had been asking questions about her Uncle Johnny's friend Brandon.

"I wants to learn to do twicks like him," Lucy chimed. "He was co-ol."

Lucy had picked up that word from Kenny, Johnny's fiancée's six-year-old son who Lucy trailed after like a puppy.

Just as Kim had trailed after Johnny and Brandon and Carter when they'd been kids. The boys had dubbed themselves the Three Musketeers, and Kim had begged to be the fourth. They had refused, although they had tolerated her, mostly because she'd been such a tomboy.

Then they'd all grown up and everything had gone awry.

Lucy twirled a pigtail around one finger. "Mommy, will Uncle Johnny's friend teach me?"

Oh, God…she didn't think so. "I doubt it, baby. He has his own ranch to run. But maybe Uncle Johnny will."

Lucy poked her lips into a pout. "But he gots his own family now. He gots Kenny and if they gets another baby he won't ever see us."

Kim tipped her daughter's chin up with her thumb, her heart aching. She'd known that one day Johnny would have his own family and was thrilled for him. No one deserved to find happiness and love more than her older brother. That was one reason she'd taken the job at the Bucking Bronc. She and Lucy couldn't live with Johnny forever. And he would never ask them to leave. He was too protective.

She just hadn't realized how much Lucy would miss him.

How much Lucy had missed not having a real daddy of her own.

"Your Uncle J will always have time for us, sugar." She kept the tears at bay. "And we'll visit him and Rachel and Kenny all the time." In fact, every time Brandon volunteered at the Bucking Bronc, they'd make the trek to Johnny's ranch. She couldn't be around Brandon and not ache for the life she'd dreamed they might share one day.

"Promise." Kim hugged her, then tucked Lucy's lamb beside her and covered her with her favorite pink blanket. Lucy snuggled down under the covers, and Kim stroked her dark red hair until she fell asleep.

Exhausted from helping reorganize and clean between camps, she went to her room and crawled in bed. But as she closed her eyes, images of Brandon plagued her.

Brandon at age ten staggering up to the fort they had built, bloody from another beating from his old man. Brandon at thirteen teaching her how to shoot a BB gun. Brandon at sixteen galloping across the pasture and showing off the tricks he'd learned from the rancher who'd given him a job and some self-respect. Brandon entering into some extreme fighting contests hoping to make a buck to get him out of his hellhole.

Then the night of the barbecue. The night Brandon had first kissed her. The night the budding romance and passion kindling between them had become more.

But another memory intruded, one so painful it was like being doused with ice water. The night Brandon had broken her heart.

She closed her eyes and drifted into a fitful sleep. In the nightmare, she was riding in the open pasture, but it was dark and she'd lost her way. She couldn't see which direction to go and someone was chasing her….

Suddenly she startled awake, her heart drumming. Outside, the wind shook the roof and something scraped the windowpane. A tree branch? One of the shutters loose?

Then another sound echoed in the silence…a door squeaking?

She vaulted up in bed, searching the darkness as she scanned the room. The dresser, the chair…the closet door was closed. Everything was just as she'd left it.

A faint sliver of moonlight seeped through the blinds, making the silhouette of the trees outside look gigantic and ominous. Had she imagined the noise? Dreamt it?

No…another sounds soft, muffled like footsteps. The floor squeaked in the living room.

Her pulse pounded, and she jumped up, slowly cracked open her door, and peered through the dimly lit hall. A shadow moved across the den.

Her breath caught as fear shot through her.

She reached for her cell phone, wishing she had a gun. But her shotgun was locked in the gun cabinet in the den.

She tiptoed to the bathroom and grabbed her hair spray, then eased through the door and crept across the hall to Lucy's room. The floor squeaked again, and fear nearly choked her.

They'd had some problems with vagrants and a vandal on the Bucking Bronc property.

Was one of them breaking in now?

She eased the door shut and locked it, determination setting in. He could steal whatever he wanted. But she wouldn't let him hurt her daughter.

Lucy was still sl... --This text refers to an out of print or unavailable edition of this title.