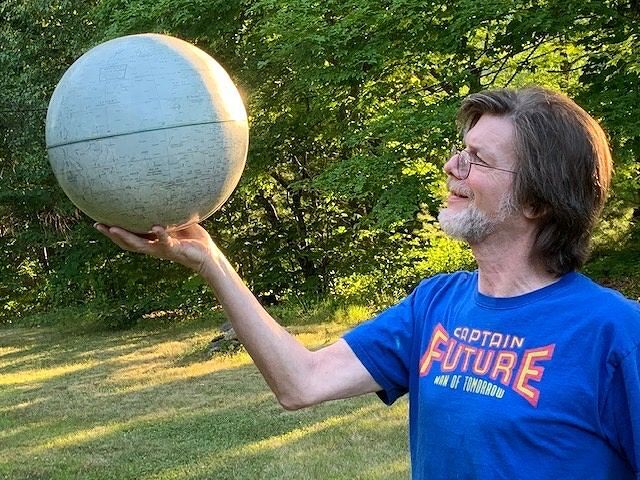 The Coyote saga continues, at the same high level as before. Immigrants from the ruined earth are arriving in a flood. Meanwhile, the alien hjadd watch the humans from their embassy on Coyote. Why? What are they learning, and what are they going to do with their knowledge? Ex-convict Hawk Thompson has a large bump of curiosity, few scruples, and not much left to lose. Which leads to discovering a great deal more about what the hjadd may be up to and implying the conversion of the Coyote saga into a grand-scale exploration of humanity’s future evolution. --Roland Green

Allen Steele received his B.A. in Communications from New England College and a MasterÂ's Degree in Journalism from the University of Missouri.

Start reading Coyote Horizon (Coyote Chronicles Book 1) on your Kindle in under a minute.

themarsman
4.0 out of 5 stars Educating Coyote
Reviewed in the United States on June 27, 2012
Verified Purchase
The world of Coyote -- 47 Ursae Majoris -- is Humanity's thriving extra-solar colony. On Coyote life is generally fairly simple -- the majority of the population leads a rural life. However, with the introduction of the starbridge, much of Earth's population see an escape from massive overcrowding. Coyote Horizon is the story of countervailing forces...on the one hand, Coyote is struggling to cope with a massive swell of people wishing to emigrate, on the other, those who already call the world home are still struggling to learn all of its wonders and understand its many facets. To this end, an Exploratory Expedition is sent out to be the first to circumnavigate the world's primary waterway, the Great Equatorial River. Along the way much data is gathered, and much is learned.

At the same time the Exploratory Expedition is traveling the vast equatorial waterway, a man is changing. Hawk Thompson, on parole for killing is father years earlier, is bequeathed a gift on a chance encounter with the alien Hjadd. This gift -- a spiritual guidebook of sorts -- fundamentally changes Hawk. So much so that he takes a new name -- chaaz'maha -- and commits himself to spreading the understanding of this alien spirituality to the inhabitants of Coyote.

Coyote Horizon is fine continuation of the Coyote story. I have enjoyed seeing characters that were first introduced in the original Coyote tale grow, change, and yes, age. If there is a fault to be had with this book (and the series in general) it is that the novel feels like a series of short stories that have been stitched together, rather than a smooth, seamless tale. But, like the other books in the series, this hardly detracts from the story the author is trying to tell. Coyote Horizon is most definitely worth reading if you have read the other stories in this series.

Baslim the Beggar
5.0 out of 5 stars "Thou art God" -- travelers in a very strange land
Reviewed in the United States on March 9, 2009
Verified Purchase
If my title has you thinking that this is another "Stranger in a Strange Land", it is and it isn't. There's a lot less sex, and a lot more action. Heinlein was doing an analysis of religion and society, with the story a means of getting it across. Steele's book is not such a set piece, but emphasizes the story more. So "Thou art God" seems a little more believable here.

This book, unlike the two books immediately preceeding it in the Coyote Universe ("Spindrift" and "Galaxy Blues"), is set almost entirely on Coyote. If you have not read the first three books ("Coyote", "Coyote Rising" and "Coyote Frontier", you will be missing a lot of background, but you could probably make your way through. You might want to check out the coyoteseriesdotcom web site. (I have not really checked it out, but Steele does mention it).

However, there is a connection to "Galaxy Blues" because in that book we learn of the importance to the aliens that were encountered in "Spindrift" of a particular set of ethical/philosophical principles. Knowledge of this is introduced more fully in "Coyote Horizon", and how people react to it is a central theme. Coupled to it is the idea of the impact of the existence of aliens on some earth religions, particularly Judeo-Christian fundamentalism.

Like the other Coyote titled books, this one is episodic. We start with Hawk Thompson, some years after he killed his abusive father. He has spent time on a work farm and is now employed as a customs inspector, but has no hope. He finds a friend, Melissa, when he saves a prostitute from an abusive john. He also assists in the capture of a dangerous man (we don't know how dangerous until later) who vows revenge on Hawk.

But everything changes when Hawk is the customs agent chosen to meet an alien ambassador. Despite almost triggering diplomatic outrage, or because of it, Hawk receives a gift from the alien. It is the electronic "book" (the Sa'Tong-tas) which discusses the aliens' ethical/philosophical position. Hawk listens(the book may be a form of AI), and leaves with Melissa for some place where he might get answers. Since he is still on probation, he is now a fugitive. During this episode we see that there is significant immigration from earth to Coyote.

The next episode is about Sawyer Lee, who leads hunting expeditions of tourist-hunters from earth to bag a boid, Coyote's most feared land predator. He returns from such an expedition to find that Morgan Goldstein, probably the wealthiest human in the universe, wants Sawyer to help find a former employee of whom Goldstein was very fond. That expedition leads to a wilderness area where the Joseph Walking Star and his companions (thought to be addicted to a drug injected by "pseudo-wasps") have settled in. In the end, a "monastery" is to be built for these folks, who have found something very important.

The next episode gets closer to the heart of things. A "Dominionist" (something like a roman catholic, but not exactly so) cleric arrives in a response for help from a Reverend Rice of his church. The church has lost all but a very few of the former believers. A discussion follows, but the gist is that people don't accept a religion that declares that only Man counts with God. There is an alien delegation from a more advanced civilization, and the aliens reject the notion of a God as posited by humans. Those who were Dominionist have switched to other less species specific faiths or simply don't accept human religion. Reverend Rice has spoken with the Alien cultural envoy and comes away angry at "blasphemy" but also realizing that he no longer has faith either. This infuriates the visiting cleric.

The next episode involves the meeting of Hawk Thompson with the group in the wilderness. Transformations all around.

Next, Sawyer Lee embarks on a voyage around Coyote aboard a scientific vessel. Think Beagle or Challenger type expeditions. During this period, we learn of a change in government of one of the largest powers back on earth. The way is cleared for even more immigrants to arrive on Coyote.

Next we find Hawk, a pregnant Melissa, and Jospeh Walking Star traveling around, spreading the word of the Sa'Tong-tas. Hawk now goes by the title, chaaz-maha (teacher). And teach he does. It is clear that this is not a religion, but an ethical/philosophical stance.

Let me say a few words about it.

First, it is posited that every race has its own version of a God (or gods) creating those races as a divine act.

Once you start meeting other races you realize that you create God, not the other way around. So you are God, and so is every other being you meet.

From there it is essentially the Golden Rule, with some specific codicils that remind me of Asimov's three laws, extended to any thinking being.

It goes beyond that of course. One must learn how to think of others and how your actions toward them should be framed. This section of the book provides some good examples. I have simplified how all this occurs. People are skeptical of this new system, and always assume it is a new religion.

By now, Coyote is being flooded with refugees from earth. The chaaz-maha convinces the people of the village he is visiting to help with relief efforts and he also teaches. Since he has returned to the where he fled earlier, arrest is to be expected.

I won't say more about what follows. Some good is done, some evil is done.

A sequel, "Coyote Destiny", is promised by Steele at the beginning of the book.

Amazon Customer
5.0 out of 5 stars wonderful story
Reviewed in the United States on April 13, 2013
Verified Purchase
I love scfi!

His is a wonderful scfi story without all the weird monsters. The author has kept to a believable science. I found the only bad part of the book was that it ended. You certainly want the story to continue.

Get it, you will not be disappointed.

I liked this book but it was little disturbing in a philosophical manner. Hopefully I am not spoiling anything by saying that this book on interstellar exploration reminds me a little bit of _Stranger in a Strange Land_.
Read more
Helpful
Report abuse
See all reviews

PJ Online
5.0 out of 5 stars Nicely ties up the story
Reviewed in the United Kingdom on July 12, 2011
Verified Purchase
This starts to bring to a close the Coyote books. It extends some aspects and closes down most. This, and Coyote Destiny lay open a "Coyote Universe" that could allow Steele to expand the story lines to other worlds and characters. I hope he does because they are engaging reads with well developed characters. Not too complex but pitched just about right to make these books great entertainment.
Read more
One person found this helpful
Report abuse

Devereux C. Josephs
4.0 out of 5 stars Space opera!
Reviewed in Germany on June 24, 2013
Verified Purchase
This is not as exciting as the first three Coyote books. Still, it's well-written, and its vivid depiction of a frontier world with an alien ecology is outstanding.

The book falls more toward the "hard" end of the SF spectrum, but not extremely so: it relates to the world as we know it, but does not stand or fall on any particular quirk of science.

If you're a fan of interplanetary stories, you'll enjoy this book.
Read more
Report abuse

fabrizio oldrini
5.0 out of 5 stars coyote horizon
Reviewed in Italy on June 13, 2014
Verified Purchase
the book is new, arrived ok, shipping in a couple of weeks, bought with coupons, so it was free for me!
Read more
Report abuse
See all reviews