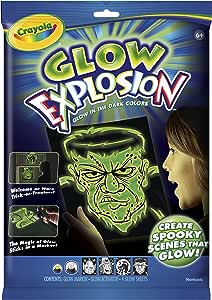 Visit the Crayola Store
1.0 out of 5 stars 1 rating

1.0 out of 5 stars
1 out of 5
1 global rating
How are ratings calculated?
To calculate the overall star rating and percentage breakdown by star, we don’t use a simple average. Instead, our system considers things like how recent a review is and if the reviewer bought the item on Amazon. It also analyzes reviews to verify trustworthiness.
Top reviews

K. Draheim
1.0 out of 5 stars C is for Crayola.. or CLASS ACTION SUIT!
Reviewed in the United States on October 20, 2012
WOW. I'm truly not certain whether "Glow Explosion!" s a child's craft activity marketed by Crayola, or a covert attempt at chemical warfare against the youth of America.

The company's development team must have been playing with this product while locked in a broom closet for a few hours before they decided it was a good idea to put the company name on "Glow Explosion!" and market it to small children. I say this because it would require the death of a substantial number of brain cells for anyone to believe the fumes streaming off those markers are safe to be inhaled by children - or anyone- . An hour or so with those markers in a poorly ventilated area would probably create enough oxygen deprivation to the brain to result in significantly impaired judgement, if not substantial brain damage.

As soon as we removed the first cap from the first glow marker, the chemical fumes hit me. My first thought: "Anything that smells THAT BAD just can not be safe," so I started reading the instruction sheet for warnings.. Not even an advisement to use in a well-ventilated area! But the sheet does assuage any concerns product users may have with this comforting disclosure: "NOTE: Glow markers have a characteristic scent which is safe and nontoxic". Whew! What they fail to disclose is that "characteristic odor" means noxious, headache-and-nausea-inducing' REALLY BAD odor.

When I say these fumes smell bad, I don't mean Sharpie marker bad, or painting in a small room with the windows closed bad.. We're talking trapped inside a home that's being bug-bombed bad, or shut inside a small area with a towel thrown over your head and an open can of paint solvent in you lap bad. It's THAT BAD.

Oh, and by the way, the instructions warn you to cover your workspace with aluminum foil because the markers will leak through the paper and they will stain any porous surface they touch, and also, to use the blotter paper provided behind your picture to display them to prevent staining (because the ink on the pictures will never dry). Ever. So they will always retain their staining (and stinking) power. Any red flags yet, Mom and Dad? How is there NOT a recall on this nightmare?!

MY EXPERIENCE with the product:
We followed all of the directions and used Crayola "Glow Explosion!" in a large, open room. About 5 minutes into our activity I cracked open a window about 5 inches (October in the Midwest at night is cold) and still, the fumes flooded the whole level of our home. After completing the coloring phase, we decided to let the pictures air out in the garage and air out the main level of the house as well, since the fumes were really beginning to make my daughter and me feel ill.

Against my better judgement, and because my daughter was pleading to see how the glow activator worked and eager to see her glowing masterpiece, I agreed to see the project through to its completion. This time, windows all the way up, door open, and wishing we had access to gas masks.

Did the glow activator deliver as advertised? Mostly. Not as well as portrayed on the packaging- it came out streaky, but it did luminesce and my 8 year old thought it was very cool and exciting to activate them by coloring the image in the dark.

But it was heartbreaking to have to take her pictures away and stow them in the garage after admiring them for a short time. And it is a waste to have to throw them away along with the other 2 unused packages today. The odor NEVER got any better, and my garage smells like it's been fumigated with a vat of paint thinner.

Worst of all, we both got terrible headaches from inhaling the "Glow Explosion!" fumes, and several hours after we had finished with the whole ordeal my daughter enjoyed sensations of dizziness and nausea along with her headache.

Bottom line: there's a reason why those glo-stick bracelets are encased in plastic and they don't make luminescent paints and makers for adults or children. And we don't use mercury thermometers anymore either.

C'mon' Crayola, consumers expect more from a company with your reputation. Send out an apology, a recall, and refund vouchers. Seriously.