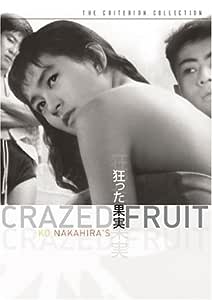 Add to Cart
$29.95
& FREE Shipping on eligible orders. Details
Sold by: Amazon.com
Have one to sell?
Sell on Amazon

Two brothers compete for the amorous favors of a young woman during a seaside summer of gambling, boating, and drinking in the seminal "sun tribe" (taiyozoku) film from director Ko Nakahira. Adapted from the controversial novel by Shintaro Ishiharaand critically savaged for its lurid portrayal of post war sexual revolution among Japan's young and privilegedCrazed Fruit is an anarchic outcry against tradition and the older generation.

Crazed Fruit ushered in a new era for Japanese cinema. Shot in 17 days (extravagant by Nikkatsu Studio standards), the film's strong language, intimations of casual sex, and complete disregard for authority, would unsettle an entire nation, while blazing a path for the likes of Seijun Suzuki and Nagisa Oshima. (Even François Truffaut was impressed.) It begins one leisurely summer as brothers Natsuhisa (Yujiro Ishihara) and Haruji (Oshima star Masahiko Tsugawa) sail, water-ski, and make "boredom their credo''--until both fall for the married Eri (Ishiharas future wife, Mie Kitahara). In short order, boredom will be replaced by tragedy. Inventively lensed by Shigeyoshi Mine (Tokyo Drifter), Ko Nakahira's controversial debut was the centerpiece of a 1956 trio of taiyozoku, or "Sun Tribe," films about affluent youth written by novelist-turned-politician Shintaro Ishihara (Yujiro's brother). The suitably dark and jazzy score is by Kurosawa vets Masaru Sato (Yojimbo) and Toru Takemitsu (Ran). --Kathleen C. Fennessy

3.6 out of 5 stars
3.6 out of 5
18 global ratings
How are ratings calculated?
To calculate the overall star rating and percentage breakdown by star, we don’t use a simple average. Instead, our system considers things like how recent a review is and if the reviewer bought the item on Amazon. It also analyzes reviews to verify trustworthiness.
Top reviews

Dine Fuss
5.0 out of 5 stars Sublime Experience in the Backdrop of the Treacherous Quagmire of Love...
Reviewed in the United States on July 4, 2005
Verified Purchase
The 1950s were a time of distrust among the adolescent and young adults where older generations and traditions became a target for suspicion. In the post-war world juvenile delinquency and resistance to the ways of the old traditions became more prominent. It was not a mere Japanese issue, as youth throughout the world, mostly in Europe and the United States began to openly express their contempt with society's old ways. Films such as Rebel without a Cause (1955) among others helped spreading the discontent with older generations to other continents. Crazed Fruits became the Japanese version of Rebel without a Cause, as it tells the story of two brothers, Natsuhisa (Yujiro Ishihara) and Haruj (Masahiko Tsugawa).

The ingenious opening by director Kô Nakahira displays a boat approaching with high speed on the calm sea while a descending sun reflects its light on the surface. A sudden cut displays the rear of the boat that demonstratively displays the velocity of the boat, as high waves are forced to the sides. The camera subsequently brings the audience to the front of the boat presenting a young man in three quarters frame while slowly focusing in on his face. This young man, Haruji, is sweating while his eyes continually shift direction with a face that radiates apprehension. It is an artistic and clever beginning, which instills both uneasiness and suspicion.

Underneath the surface, the opening scene could create a symbolic statement in regards to the youth of the 1950's, and in this case Japanese youth. Through an attempt of deciphering the scene several symbols seem to emerge. For example, the ocean provides a symbol for vastness, which could suggest the size of the society in this case. In the middle of this society, there is a boat moving rapidly that offers further symbolic notions of adolescent impatience, maybe even restlessness. In the boat there is a young man, a product of the society, if you will, enlightened by older generations. However, the young man is fearful of the society, as he swiftly scans his surroundings for possible surprises.

After the opening the film continues to tell the story about the two brothers, Natsuhisa and Haruj. The older 21-year old brother Natsuhisa is a restless spirit who does not care about school, or the values of the old traditions. He hangs out with a group of like-minded peers led by the laidback Frank who is heavily influenced by American style. Young adults such as Natsuhisa and Frank have gained the name taiyozoku, which means Sun Tribe. These rebellious youths gained this name due to their careless attitude, as they did not try to achieve anything productive. Instead they go clubbing at night, sleep all day, and spend their afternoons on the seaside water-skiing or boating. Natsuhisa's younger brother, the 16-year old brother Haruj, is more innocent and traditional in his manners, and does not like his older brother's friends.

As the story unfolds, the audience learns that the girl Eri (Mie Kitahara), plays a significant part in the film, as Haruj cannot get her out of his head after having bumped into her in the beginning of the film. He continues to think of her beauty and creates a vision of her while his brother makes fun of his infatuated manners. The second time Haruj encounters Eri is when he and his brother are water-skiing. Eri is far out from the beaches where water currents are strong, which brings to mind the possible danger of drowning. However, they pick her up and drive her ashore. This situation is loaded with symbolic meaning that brings Greek mythology to mind to which Odysseys' men had to prop their ears with wax to protect themselves. Haruj's innocence establishes a virtuous image of Eri, but his brother later learns the truth. This story eventually brings to mind Antigone by Sophocles, as the brothers seem to begin to battle for the power of the one thing they both desire.

Crazed Fruits was written by Shintarô Ishihara who gained an immense group of young followers from this book, as they could recognize themselves in the novel. The film continues in Ishihara's footsteps to illustrate a disillusioned youth that strive to find a way to change things. However, in this story they get stuck, as values and family traditions have been abandoned. Nakahira enhances the tale through brilliant cinematography and visual symbolism, which transcends the written tale into a majestic film that prompted a new wave of cinema in Japan. In the light of more modern film this groundbreaking film might seem shy, but one must take into consideration what was regarded as ok to the authorities of censorship. Nonetheless, Nakahira provides a sublime experience about rebellious youth in the backdrop of the treacherous quagmire of love.
Read more
5 people found this helpful
Helpful
Comment Report abuse

Eileen Goh
5.0 out of 5 stars Crazed Fruit (1956)
Reviewed in the United States on April 21, 2009
Verified Purchase
Based on a novel by the current Governor of Tokyo, Shintaro Ishihara, and starring the governor's younger brother, Yujiro Ishihara, "Crazed Fruit" can easily rival any Oscar-winning film had Nikkatsu Corporation produced the former in the English language.

The year is 1956. The Allied Occupation of Japan has just ended, but American influence is still rife in Japanese society.

With money to burn and time to kill, a group of privileged and rebellious Japanese in their late teens and early twenties adopt a lifestyle of wine, women and song by the beach. Their unofficial leader is Frank Hirosawa (Masumi Okada), a melancholy youth whose wealthy Japanese father had divorced Frank's American mother to marry a Japanese barmaid.

Among the other members of the group are Natsuhisa (Yujiro Ishihara) and his younger brother, Haruji (Masahiko Tsugawa), who become some of Frank's closest friends. The relationship between Natsuhisa and Haruji is fine until a strikingly beautiful girl, Eri (Mie Kitahara), enters their lives.

20-year-old Eri is secretly married to an American three times her age. With her husband constantly away from Japan, Eri takes on many lovers among her Japanese acquaintances.

The virginal Haruji quickly wins Eri's heart, but his more seasoned elder brother blackmails Eri into having an affair with him at the same time.

Life becomes more complicated when Natsuhisa falls in love with Eri and Frank is forced to intervene in an attempt to end the bitter rivalry over Eri between the two brothers.

Directed by Ko Nakahira, "Crazed Fruit" showcases the immense talents of its cast members, in particular, its four lead characters -- Yujiro Ishihara, Masahiko Tsugawa, Mie Kitahara and Masumi Okada. Much of the film's success can be attributed to the brilliant performances of its cast, although "Crazed Fruit" also scores for direction, film editing, cinematography, screenplay adaptation and English subtitling.

The film's visual effects are stunning, particularly in the closing scenes, where Haruji's revenge lends a spectacular ending to a superb film.

"Crazed Fruit" helped to launch the acting careers of Masumi Okada and Masahiko Tsugawa, both of whom have since risen to become distinguished personalities in the entertainment industry.
Read more
2 people found this helpful
Helpful
Comment Report abuse

D. Thomas Hardison
4.0 out of 5 stars Raw reality
Reviewed in the United States on August 16, 2005
Verified Purchase
Having lived in Japan for seven years, and taught at a fine University during that time, I saw many young people who were on the fringe of society....even now, and it was unnerving to see the total disregard for others in this film so early after the war. That attitude is still prevalent in Japan.

The fact that the attitude seems rather universal in Western societies, and increasingly all Asian societies as well, the young people grow into adulthood, keeping their adolescence.

It surely fosters the ME, ME, ME behavior and makes real human compassion difficult in light of this obsessive selfishness.

I cringe at some of the scenes in the film because it is such raw reality. Beautiful people doing not so beautiful things,

is a fascination for many people, so I think the film will be an interesting wake up call for our present time.
Read more
16 people found this helpful
Helpful
Comment Report abuse

The film is normally considered an early example of the Japanese "New Wave" , but it has none of the energy or vividness of a French new wave picture like "Breahtless."
Read more
One person found this helpful
Helpful
Comment Report abuse
See all reviews
Pages with related products. See and discover other items: criterion classic film