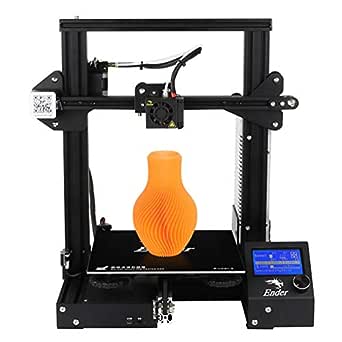 Visit the Creality 3D Store
4.4 out of 5 stars 257 ratings
| 69 answered questions
Currently unavailable.
We don't know when or if this item will be back in stock.

4.4 out of 5 stars
4.4 out of 5
257 global ratings
How are ratings calculated?
To calculate the overall star rating and percentage breakdown by star, we don’t use a simple average. Instead, our system considers things like how recent a review is and if the reviewer bought the item on Amazon. It also analyzes reviews to verify trustworthiness.

Kindle Customer
5.0 out of 5 stars Had issues, yet still consider this 5-stars
Reviewed in the United States on June 16, 2018
Verified Purchase
TLDR: Had issues, not all of them related to the printer, even though they appeared to be. Seller was EXTREMELY helpful in working with me. Resolved issues and I love this thing.

I'd been considering a 3D printer for a while and honestly couldn't pass this up for the price. Normally you see something with this capacity costing $500+, so I ordered it.

Be aware: This is a kit, you need to assemble this printer (again, knew that going in). This is my first printer and there were issues (see below). I don't consider myself exceptional with tools, I can put things together and I know the basics of soldering. You shouldn't need the secondary skill (I did because I'm impatient), if you (or a friend) are decent with tools you should be able to assemble this without issue.

Received the printer in a timely manner (prime delivery), used a couple of youtube videos as reference for assembly as the included instructions are kind of sparse.

First issue I ran into: When you look at step 5 of the instructions provided (and most of the assembly videos), you'll see the Bowden tube connector is pointed towards the right side of the frame. Filament hangs from the top, comes down the left side and feeds through the Bowden feed into the tube, which runs out over the bed. Mine came with the feed assembly rotated 90 degrees. The Bowden tube was pointed at the extruder head, which would have caused the Bowden tube to kink/bend and I would have ended up with feed issues. The fix was to remove the clamp with the spring that feeds across the stepper motor and rotate it 90 degrees. No big deal.

Second issue: The videos show the z-axis motor didn't come with documented screws. The instructions had a couple of steps where they point at screws you need to use, but didn't label the specific screws from the parts list. Again, the major one is referenced in the youtube videos, but the z-axis motor wasn't. In the videos I saw, the screws were already in the motor and they didn't say their instructions were missing the specific screws. Fortunately they ship a lot of extra of each screw, I ended up using two of the extra M4x20 screws.

Third issue I ran into was the y-axis limit switch being broken. After I completed the assembly, when I powered it up the first time and had it home, as it moved along the y-axis, I heard the heat bed slam into something and the stepper motor continued to run. I hit the power switch and started looking. I noticed that the top of the plastic enclosure for the limit switch was broken, which caused the lever that the bed should it to be lower than the rollers. What I should have done was reached out to the seller (because they give excellent support). What I ended up doing was going to a local electronic parts store, buying a new limit switch, de-soldering the existing one from the circuit board and installing the new one.

Once it was setup, I attempted to print an xyz calibration cube using the provided filament and it printed beautifully. Was very happy with the way it printed out. I then tried to print a benchy test to see how it came out and ran out of filament part way through. I swapped to a roll of filament I purchased with the printer and had serious layer separation. I used a couple of troubleshooting guides with no luck, so I reached out to the seller.

Seller was VERY responsive and worked with me on trying to figure out what the issue was. I had an issue with the hotend at one point and they very quickly sent me another (hot end wasn't the issue).

I ended up printing a temperature tower test and found that my issue was a combination of too little infill and not enough temperature. Once I fixed both of those in my slicer software, the prints started coming out beautifully again.

4d
5.0 out of 5 stars Lot's of problems but great support all resolved.
Reviewed in the United States on July 30, 2018
Verified Purchase
I originally had several problems with the printer.

Why 5 stars? Because once those things were fixed the printer worked very well and the vendor was AWESOME!

This is a very inexpensive printer from China that takes less then an hour to build and produces good prints. Can you really complain at a few minor inconveniences that were handled expertly by the vendor?

Don Mac
5.0 out of 5 stars Amazing printer! New to printing, this is the one you want!
Reviewed in the United States on October 25, 2018
Verified Purchase
I previously purchased a different printer, and struggled to get decent prints out of it. It took endless settings tweaking to get something that still took a whole lot of clean-up to make look decent. My Ender 3 is amazing though. I put it together in about an hour, and was printing less than an hour after that. I started with a test print on the dog file that is included, and was blown away. The pictures I've included have not had any clean-up at all with the exception of taking off the supports. The picture of the gray Darth Vader Buudha(printed on previous printer) beside the orange dog is the difference between my previous printer, and the Ender 3. The orange dog was my first test print on the Ender 3, and the fan shroud beside is my second print(neither took any clean-up what-so-ever. Both straight from the printer bed). The Darth Vader Buudha is my last print with my previous printer, after having weeks to try and get the setting as good as possible. I am definitely still very much a novice at this, but the difference in quality is night and day. This is the printer you are looking for, do not move along.
Read more

Amazon Customer
5.0 out of 5 stars Get it now! The best starter 3d printer on the market!
Reviewed in the United States on April 5, 2019
Verified Purchase
If you are starting out with 3d printing this is the printer for you.. and once in a while Amazon has it on sale for $189.99 also! I use only 3D solutech filament as it has never failed me.. I have updated some photos and a video to show you it at various stages of builds. If the filament does not stick truthfully 9 times out of 10 it is from not leveling the bed and having it low enough for the 1 layer adhesion. Questions, just ask.. quiet and affordable.. it works and for educators too it s the one to try out to get you hooked!
Read more

Amazon Customer
5.0 out of 5 stars Happily Surprised!!
Reviewed in the United States on September 22, 2018
Verified Purchase
This is my first 3d printer. Took a couple hours (and a couple glasses of wine) to assemble. Contrary to a number of other reviews there were decent instructions in the box. Not perfect:there were a couple steps that were not illustrated clearly, but eventually figured it out and did not even need to consult youtube.
Having great results so far…had an initial issue with my prints, because had tolerance between bed and extruder tip too tight, but loosened it up and worked great. Also had issue first couple prints because using wrong (very wrong) slicer settings, but once went through and set them all to defaults that Creality recommended, prints have been perfect. Have had NO issues (yet) with my prints sticking to bed, great adhesion with default plastic sheet Creality provides as stock. Overall I am shocked at the quality of product, and the ease of use for such an inexpensive printer.
After running about half a Kg of PLA through it I have not even needed to re-level the bed. One of the cooling fans is getting noisy, so might contact support for a replacement...or just might buy another one myself (they are about $5)
All around highly recommend for the price.

Page 1 of 1 Start overPage 1 of 1
This shopping feature will continue to load items when the Enter key is pressed. In order to navigate out of this carousel please use your heading shortcut key to navigate to the next or previous heading.
Back
Next
Pages with related products. See and discover other items: v wheel, prusa 3d printer, all metal 3d printer, Small 3D Printers, 3d printers under 300 dollars, v slot wheels