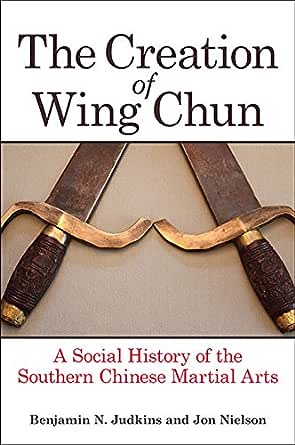 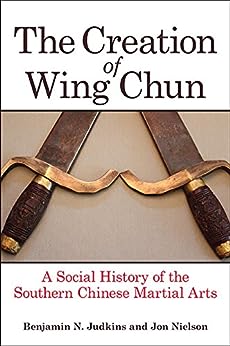 The Creation of Wing Chun: A Social History of the Southern Chinese Martial Arts Kindle Edition

“…outstanding … There is no substitute for reading this wonderful book. It is a treasure trove of insightful information on Wing Chun, martial arts, modern Chinese history, and modern Chinese culture. It is also a great micro-history of a particular physical practice, and a great local history of Hong Kong.” ― Journal of Chinese Military History

“Martial arts was scorned by traditional Chinese literati, ignored by Western historians, and predicted to go extinct by Western and Chinese modernizers. However, as this book brilliantly demonstrates, late imperial and twentieth century Chinese history cannot be properly understood without it … Wing Chun students will see the most definitive exposition of the roots of their art, historians will see twentieth-century China through a new lens, and martial arts studies scholars will see a high water mark and model in their field.” ― Martial Arts Studies

“The Creation of Wing Chun is a fascinating read and a book that I highly recommend to all Wing Chun students.” ― Tony Massengill, Wing Chun Illustrated --This text refers to the paperback edition.

Lowell
5.0 out of 5 stars This is Not your Grandma's Shaolin Origin Story
Reviewed in the United States on September 21, 2015
Verified Purchase
The ideas introduced in this book shattered my conceptions of the historical origins of southern Chinese Kung Fu. This book provides a fresh, accessible history of Wing Chun kung fu that debunks the folkloric, mystical origins of the martial art as being developed by survivors of the alleged Shaolin Temple destruction during the Qing Dynasty.

The book tells the story of how Wing Chun co-developed with other martial art systems in southern China (namely, Guangdong and Fujian provinces). The book examined the ecology of the 18th, 19th and 20th centuries that shaped the social, political and economic interests of the southern Chinese peoples and ultimately fostered the development of Wing Chun and other martial arts.

The authors include fascinating interludes into the background of several systems of kung fu including: Bak Mei (White Eyebrow) Choy gar, Fut gar, Hung gar, Li gar, Mok gar, Choy Li Fut, Dragon, Southern Mantis, White Crane and many other styles. These abbreviated backgrounds were interwoven with the story of Wing Chun to illustrate how the influences of both Punti (Cantonese "original local") and Hakka (Han "guest families") martial arts mixed among the systems, resulting in more than just a passing resemblance among them in their practice. This cross-influence and co-development of the diverse southern systems of Chinese martial arts is the true origin story of Wing Chun and southern Kung Fu. Interestingly, nearly all of these southern systems share the same mythical Shaolin origins motif. Similar traditions are recounted by some customary family lineage associations in southern China and in the initiation rites used by Triad organizations.

The later part of the book recounts the transmittance of Wing Chun to Ip Man and his systemization of the art in the 20th century. This modern history retells how Ip Man's instructors learned Wing Chun and instructed him in the martial art. Ip Man's learning and teaching of Wing Chun is told through the lens of Chinese history, focusing on the social institutions that shaped southern Chinese opinion of martial arts during the Republican Era, Japanese Occupation and ultimately, the Communist takeover of China. This historical outlook showed the personal stresses and social influences experienced by Ip Man that ultimately shaped his Wing Chun kung fu and led to the popularization of the system throughout the world.

Richard Erney
5.0 out of 5 stars The Story That Carries You Beyond the Myths!
Reviewed in the United States on October 12, 2015
Verified Purchase
I just recently finished "The Creation of Wing Chun" by Ben Judkins and Jon Nielson. First & foremost the book is a scholarly history of the southern Chinese martial arts in general and Wing Chun in particular. Early on, it exposes the popular legend of Wing Chun originating in the Shaolin Temple and being developed by a woman as a myth. Once the myth is shattered we learn how & why the story likely developed and why it is still a important allegory. Moving beyond the myth, the book explores the economic, cultural, social & political conditions that led to the development of multiple hand combat systems including Wing Chun in southern China in the 19th century. Continuing into the modern era, the book gives us interesting insights into Ip Man & his lineage of Wing Chun in particular and the development of the martial arts as a source of local and national pride in China. Finally, the book discusses the significance of the explosion of Wing Chun on to the world stage in the latter part of the 20th century.
> This is an important book because it is a highly focused case study on the development of a single art as it emerged from a particular area. It separates fact from fiction and lays the groundwork for further research. In short, it helps us understand the historical & social significance of Wing Chun well beyond any myth. I'm impressed at the amount of time, energy and research that has gone into producing this work. I believe that it will become an important reference in the decades to come.
Richard
Read more
18 people found this helpful
Helpful
Comment Report abuse

C. Mowry
5.0 out of 5 stars A wonderful academic work.
Reviewed in the United States on March 22, 2017
Verified Purchase
If you are interested in the actual history surrounding Wing Chun and other Chinese martial arts, then this is the book for you. It is in every way and academic work that has been well researched and put together in a way that any historian, martial artist, or enthusiast can enjoy.
This book goes to a great extent to examine the social climate surrounding Chinese martial arts and how the events of the late 1800s would influence martial arts into the modern century. The culmination of these events being Yip(Ip) Man and the spread of Wing Chun globally.
I would highly recommend this book to anyone serious about traditional Chinese martial arts as well as anyone with an interest in Chinese social and cultural history.
Read more
4 people found this helpful
Helpful
Comment Report abuse

Christopher Chinn
4.0 out of 5 stars Amazing treatise on Southern Chinese Kung Fu history
Reviewed in the United States on December 18, 2017
Verified Purchase
This book has a great amount of context of Southern Chinese martial arts and the drastically shifting roles they've played in China's history. The context changes from military to fighting bandits or inter-village warfare, to urban violence and then the idea of martial arts as a fitness and moral refinement tool. Honestly, I found all of that to be well worth the price alone. The actual sections of Wing Chun end up being the last third of the book after all that context is laid out, and points out a few lineages and how they fit in the shifting spaces at the time.

If you're interested in Chinese Martial Arts history, particularly as it fits into the society and the way it's changed, this book is really great.
Read more
Helpful
Comment Report abuse

LF
5.0 out of 5 stars Very detailed
Reviewed in the United States on August 12, 2018
Verified Purchase
A superb book that may leave many practitioners wondering what Yip Man knew but decided not to teach in Hong Kong and why. My feeling is there is one wing chin and standing square on doing chi sau is but a small part of it - but the other sides/angles and weapronry were not taught except perhaps to a few of Yip Mans oldest students.
Read more
Helpful
Comment Report abuse

Norman
2.0 out of 5 stars Boring
Reviewed in the United States on November 10, 2019
Verified Purchase
They go into great detail about Chinese history and history around where Wing Chun started and not enough into actual Wing Chun. If the purpose of the book is history, that is fine. I wanted more on Wing Chun.
Read more
Helpful
Comment Report abuse

G. Barlow
5.0 out of 5 stars Much more than just the history of Wing Chun
Reviewed in the United Kingdom on June 28, 2020
Verified Purchase
One of the best books on Chinese martial arts history you'll ever read. Don't be misled by the title - this book covers much more than just the history of Wing Chun; it's also a fantastic resource on the history of Choy Li Fut and all the other Southern Chinese martial arts, like Hung Gar, etc. Judkins provides the social, cultural, economic and political history that is missing from so many lineage-obsessed martial art histories and paints an evocative picture of the chaos that erupted towards the end of the Ching Dynasty, from which so many of today's Chinese martial arts emerged. Superb.
Read more
Report abuse