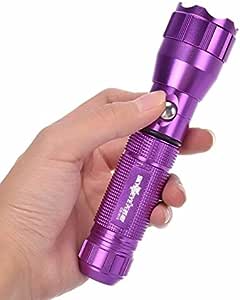 Brand: Creazydog
2.8 out of 5 stars 7 ratings
Currently unavailable.
We don't know when or if this item will be back in stock.

2.8 out of 5 stars
2.8 out of 5
7 global ratings
How are ratings calculated?
To calculate the overall star rating and percentage breakdown by star, we don’t use a simple average. Instead, our system considers things like how recent a review is and if the reviewer bought the item on Amazon. It also analyzes reviews to verify trustworthiness.

Jesse T-Baugh
3.0 out of 5 stars About 120 Lumen and bring your own battery & charger. Just OK for 5 bucks.
Reviewed in the United States on December 29, 2016
Verified Purchase
This flashlight is just meh... It does require lithium 18650 batteries. If you don't know what these are, you may want to skip this flashlight. Good 18650 batteries aren't cheap, so when you factor those in, this flashlight isn't a bargain. If you already have 18650 batteries like I do, this can be a nice (cheap) additional flashlight. I bought it thinking it would make a good host to upgrade the LED later. Looks like I may do that sooner than I thought.

Pros:
- Looks nice, has a good finish to it. The color is vibrant as in the picture, which is why I bought it.
- Takes any 18650 battery - button top or flat top, slight differences in length are handled well by the meaty spring at the bottom.
- It can stand on the tail end, the button is on the body near the head, which makes one-handed operation simple
- Aluminum body feels fairly sturdy, smooth reflector provides long throw and some surrounding spill
- It has o-rings on all the threaded pieces, but the weak point for water intrusion would be the nonsensical charging port (mentioned below)

Cons:
- Brightness nowhere near advertised - roughly 120 lumens on "High", 30 lumens on "Low" and flashing mode is same as high. It is NOT a CREE XM-L as advertised, probably a LatticeBright (Chinese) LED. I wasn't expecting 3500 lumens, but at least 300 would have been nice.
- It has a built in charging port, which I haven't tried. Why? because no charger is provided. It may have been a nice feature in a pinch, but I'd much rather use a smart charger for 18650 batteries anyway. The rubber ring and cover for the charging port is flimsy and gets in the way. Doesn't seem water tight at all. This flashlight would have actually been better without the charging port. I may fill the port with silicone and ditch the annoying rubber ring.

Basically, a really cheap Chinese flashlight. It's ok if that is what you are looking for and are familiar with 18650 batteries. The LED is mounted on a 20mm star base, which looks to be easily replaced. With a new single-mode driver and CREE XP-L LED, I think this will be a great flashlight.

Scott R.
4.0 out of 5 stars Four Stars
Reviewed in the United States on May 29, 2016
Verified Purchase
Nice flashlight, lightweight, bright even light and snappy color. It's pretty much my favorite.
Read more
Helpful
Comment Report abuse

Miss Burby
2.0 out of 5 stars Brightness not so bright
Reviewed in the United States on August 18, 2018
Verified Purchase
I like it but it's not as bright as it should be!
Read more