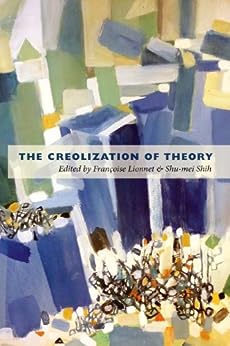 The Creolization of Theory Kindle Edition

“The Creolization of Theory is a highly significant, originally and thoughtfully conceived volume. It advances contemporary debates about the place of theory in cultural criticism in the aftermath of postmodernism, decolonization, and globalization. One of its greatest contributions is to critically decenter European theory in order to highlight the plurality of theories that emerges out of the material processes of decolonization.”—Lisa Lowe, University of California, San Diego

“Showcasing considerable critical vision and rigorous inquiry, The Creolization of Theory is an ambitious collective endeavor to rethink the notion of theory, which has been instrumental in reshaping humanistic studies in North America in the past few decades. The contributors help to develop an understanding of theory as an evolving, rather than completed, phenomenon, one that must continue to be subject to new historical and cross-cultural challenges.”—Rey Chow, author of The Age of the World Target: Self-Referentiality in War, Theory, and Comparative Work

“The essays in The Creolization of Theory present us with an excess of lucidity on the complex issues that grow out of the mixings, interrelations, and multidirectionalities of theory in today’s world. Their implications range far beyond the academy. Several of the essays here are destined to be returned to again and again. A volume to be celebrated.”—Ato Quayson, author of Aesthetic Nervousness: Disability and the Crisis of Representation

“This rich and impressively broad-ranging book lives up to its interdisciplinary billing, embodying, often within the same essay, a multiplicity of approaches and methods. It is testament to the fact that reports of theory’s death have not only been exaggerated, but indeed positively misplaced.”
-- Maeve McCusker ― Modern Language Review

“As a whole, The Creolization of Theory is extremely well-written. While the contributors specialize in fields as diverse as political philosophy, comparative literature, gender studies, and Area Studies, they successfully present their ideas using terminology comprehensible for general scholars. Moreover, the book is more than the sum of its parts: the deliberate cross-dialogue between the essays will forward future thought.”
-- Jonathan Fleck ― E3W Review of Books

"The essays of this volume, which constantly reflect upon the place of theory in the academy, as well as the origins and future of postcolonial, ethnic and Francophone studies, constitute a landmark of postcolonial studies that will no doubt be of great interest to students and scholars alike."
-- Roxanna Curto ― SubStance --This text refers to the paperback edition.

Françoise Lionnet is Professor of French and Francophone Studies, Comparative Literature, and Women’s Studies at the University of California, Los Angeles.

Shu-mei Shih is Professor of Comparative Literature, Asian Languages and Cultures, and Asian American Studies at the University of California, Los Angeles. Lionnet and Shih are co-directors of the “Cultures in Transnational Perspective” Mellon Postdoctoral Fellowship Program in the Humanities at UCLA and co-editors of Minor Transnationalism, also published by Duke University Press.

Fran&ccedil;oise Lionnet is Professor of French, Comparative Literature, African/African American Studies, and Women, Gender, and Sexuality Studies at Harvard as well Distinguished Research Professor (emerita) at UCLA. She co-directed the prestigious Mellon Postdoctoral Fellowship in the Humanities: Cultures in Transnational Perspective. She is a leading scholar in Francophone and comparative literary studies, and has published groundbreaking work in the fields of feminist literature, postcolonial studies, autobiography, and African, African-American, Caribbean and Mascarene Island studies. She is the former president of the American Comparative Literature Association.