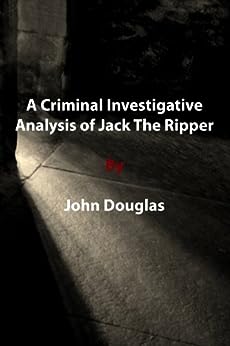 A Criminal Investigative Analysis of Jack The Ripper Kindle Edition

by John Douglas (Author) Format: Kindle Edition
See all formats and editions
Sorry, there was a problem loading this page. Try again.
Originally published in 1988, this previously classified FBI dossier documents the criminal investigative analysis prepared by criminal profiling pioneer John Douglas; who at the time of writing was a special agent at the FBI National Center for the Analysis of Violent Crime (NCAVC).

In presenting his analysis of the infamous Jack The Ripper serial murder case, Douglas addressed a number of key areas, these included:

Note From The Editor

As well as been able to read this classic publication in full, links to a series of information resources have also been included for anybody who would like to learn more about criminal profiling.

Edward J. Uecker
4.0 out of 5 stars Great Overview of SOP, but Not Much Depth
Reviewed in the United States 🇺🇸 on May 19, 2013
Verified Purchase
I've been a Jack the Ripper (what's the right word here? student? scholar? investigator?), ANYWAY,I've been interested in this case since about the age of 25 as a touchstone case of what appears to be almost pure evil. Simply put, how can one human being DO these things to another human being? What tangled mass of experience, family, upbringing, intellect, self-image and impulse and impulse CONTROL come together to create such an individual.

I must start by saying that after looking at probably 50 books and articles on the Ripper and a hundred or more on psychopathy, sociopathy, psychology, profiling and other serial murderers, In think that Patricia Cornwall in her book PORTRAIT OF A KILLER: JACK THE RIPPER CASE CLOSED has made the most compelling case of ANY in identifying artist Walter Sickert as the most likely Ripper suspect because she combines so many perspectives and disciplines and brings them into clear and logical focus onto Sickert.

Douglas' book is a great text on the profiling of serial murderers, but like so many analyses of this case, it fails to take in so many other issues that fall outside the scope of any process that operates from guidelines that are often interpreted and applied as "in or out" rules that assume that there are more similarities than differences in serial killers, which may help in narrowing down the list of suspects, but cannot be applied as hard and fast rule. The other problem here is that Douglas, like so many "Ripperologists" simply dismisses established evidence that doesn't "fit the profile". This guy is a cop and like any good cop, his M.O. is to make a case that will stand up, which may involve some overstatement of some items and complete and premeditated avoidance of other items. I have taught debate, argumentation and logic and I spent 18 years writing advertising copy. This book does a good job of arguing the case that Douglas wants to make, but as a full and thorough consideration of all the evidence and investigation, as well as the potential suspects, this book is written like any good detective FICTION...when Douglas starts writing here, he already knows how its going to end. 5/19/2013 UNCLE FOX
Read more
2 people found this helpful
Helpful
Report abuse

Christopher Stewart
5.0 out of 5 stars hard to review
Reviewed in the United States 🇺🇸 on May 21, 2012
Verified Purchase
first of my friend and mentor john douglas i sadly have to say i disagree with him. but only because in my opinion jack the ripper was never caught and was never a questioned suspect. i think it our ego that we think we are smarter than the police of that age. but of the book it is a geat example of profiling and the criminal mind and as such is very good but as a who is jack i at least say read more and form your own opinion. in examining the person that might be jack it gives the fundamentals of how to analyse in looking at the case itself i think the problem lies in the police of the time never had evidence enough. could they have matched the body part in the box with the body and then finger printed and hairs of killer and matched them to suspecs maybe things would be different jack is the one case in history that even brakes profiing which makes it worth studing from all angles and all opinions
Read more
2 people found this helpful
Helpful
Report abuse

bulitmustang
5.0 out of 5 stars A basic insight into Jack the Ripper-by former FBI profiler, John Douglas
Reviewed in the United States 🇺🇸 on July 12, 2015
Verified Purchase
This book gives the reader a basic understanding of the psychopathy of one of the most devastating and brutal killers in recent history, and delves into Douglas's assessment of the killers mental deviances and psychological make up. It also gives the shortcomings of criminal profiling through an article within the contents, offering an objective view of this investigative tool for the apprehension of violent criminals. Moreover, it can allow law enforcement officers additional insight into the psychological make up of a violent offender, and what kind of a person they should be looking for.
Read more
Helpful
Report abuse

D. Lad
5.0 out of 5 stars Exhilarating!
Reviewed in the United States 🇺🇸 on August 23, 2013
Verified Purchase
Never have I been so intrigued by the research and dedication of one mans exploration as I have with John Douglas. I have been investigating the Ripper for over 40 years, and I must say, impressive. Anyone who claims to know the Ripper cases and has not read this gem has done him or herself a grave disservice. This will be among my top research tools in my personal library. Kudos Mr. Douglas.
Read more
Helpful
Report abuse

anna
4.0 out of 5 stars great read
Reviewed in the United States 🇺🇸 on November 18, 2013
Verified Purchase
Very short book, however it was straight to the point and very informative. I love John Douglas' work. His insight to the minds of criminals is amazing.
Read more
Helpful
Report abuse

Debra
5.0 out of 5 stars Awesome read!
Reviewed in the United States 🇺🇸 on July 3, 2015
Verified Purchase
It's a little short, but it's a great read. The profile is amazing. It's interesting, keeps you reading and interested
Read more
Helpful
Report abuse

Trish
5.0 out of 5 stars Love it!
Reviewed in the United States 🇺🇸 on October 11, 2013
Verified Purchase
One of those books you cannot put down - John Douglas is so interesting to read. Highly recommend all his books.
Read more
Helpful
Report abuse

Melody
1.0 out of 5 stars Not worth the $3
Reviewed in the United States 🇺🇸 on August 27, 2012
Really thought there would be more to this than there was. I have read full books that cost less than this and were better.
Read more
One person found this helpful
Helpful
Report abuse
See all reviews

Karen
3.0 out of 5 stars Very short
Reviewed in the United Kingdom 🇬🇧 on February 25, 2013
Verified Purchase
When i bought this book i didnt realise it would only take 5 minutes to read from start to finish not really a book but more like a paragraph
Read more
Report abuse
See all reviews
Report an issue
Does this item contain inappropriate content?
Report
Do you believe that this item violates a copyright?
Report
Does this item contain quality or formatting issues?
Report