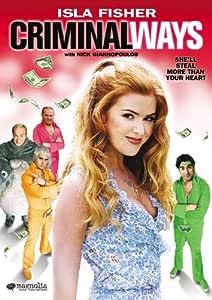 Isla Fisher plays Kirsty, a sexy bad girl who seduces Danny (Nick Giannopoulos), a failed entertainer, in order to get him to accept a job training a crew of criminals who are posing as a children's entertainment group. The crooks plan on using their act as a distraction at a billionaire's child s birthday party in order to pull off a heist. It s an uproarious comedy that puts an untalented bunch of crooks on stage and makes them an unlikely overnight worldwide sensation.

QT Moth
1.0 out of 5 stars Why is Elsa Fischer on the Cover?
Reviewed in the United States on February 20, 2013
Verified Purchase
Not much to this movie. Lame, unfunny, uneven caper movie filmed mostly in a garage. Elsa is barely in it.
Read more
Helpful
Comment Report abuse

Kathryn's Inbox
2.0 out of 5 stars Criminal Ways Indeed
Reviewed in the United States on October 22, 2009
In 2002, Nick "Wog Boy" Giannopolis wrote, stared in and directed "The Wannabes" a silly, slapstick comedy about a gang of criminals who pose as a children's entertainment group, with former soap star Isla Fisher in a minor role as his love interest. The film, shot in Melbourne, copped bad reviews at a time when Aussie comedy was not flavour of the month with Australian film reviewers or film goers.

Fast forward to 2009, Isla Fisher is a Hollywood star, and the Wannabes has been re-released with a brand new title and cover artwork, marketing Fisher as the star of the film for the benefit of the yanks or anyone else who may have missed the film the first time around. The film isn't as bad as some of the Australian reviews made out. Just. Still, only a fool or a diehard fan of Ms Fisher would consider paying $[...] for this slick piece of marketing. Criminal indeed.

L. Morrall
1.0 out of 5 stars Awful - Not even worth it for Isla Fisher at her best.
Reviewed in the United Kingdom on April 10, 2014
Verified Purchase
Very very bad film.

Isla Fisher is OK in it, and very watchable, apart from that it's embarrassingly awful. Even die-hard Fisher fans - avoid, and I'm sure it's the kind of film she'd avoid now also...
Read more
Report abuse

Mr. G. Booth
1.0 out of 5 stars warning, do not buy
Reviewed in the United Kingdom on March 6, 2014
Verified Purchase
this film boasts Isla Fisher, and as always she looks cute... but this film is not funny, in fact it was painful to watch and then binned.
Read more
Report abuse
See all reviews