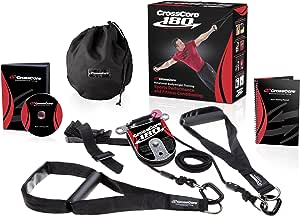 Brand: CrossCore
3.8 out of 5 stars 21 ratings
| 8 answered questions
Currently unavailable.
We don't know when or if this item will be back in stock.

The CrossCore180 Rotational Bodyweight Trainer is the evolution of bodyweight training straps and has been named the most versatile and effective portable training device on the planet by professional athletes, coaches and the military elite. CrossCore adds the third plane of motion (rotation) to bodyweight exercises which allows for much greater range of motion to be performed while exercising. The CrossCore180 is the only portable training device that allows other forms of resistance to be used besides the users bodyweight such as kettlebells, dumbbells and sandbags. Invented for the military, the CrossCore180 is constructed with only high quality components and can be used in any environment.

3.8 out of 5 stars
3.8 out of 5
21 global ratings
How are ratings calculated?
To calculate the overall star rating and percentage breakdown by star, we don’t use a simple average. Instead, our system considers things like how recent a review is and if the reviewer bought the item on Amazon. It also analyzes reviews to verify trustworthiness.
Top reviews

S. Linen Jr.
3.0 out of 5 stars Bit of a Let Down
Reviewed in the United States on April 30, 2017
Verified Purchase
When I initially saw this priced at $129.99, I jumped on it immediately. I was convinced, with never having using it, that this was the best suspension trainer out there. I know some people disliked the means by which you had to adjust the length of the rope, but I figured that it was a small price to pay for having the best suspension trainer on the market. And again, this was all based on the videos I'd seen and not personally testing it out myself.

Well not long after I received the notice that the CrossCore180 had arrived at the Amazon Locker, I went to pick it up. Brought it back to my apartment, set it up on my half squat rack and was met with great disappointment. I love the idea of the pulley system it uses but the actual execution isn't that good. Instead of using straps like the TRX, you hang from a nylon rope and the rotation comes from a smooth plastic disc that the rope sits in. That maybe the problem, or part of the problem. The smoothness of that plastic disc and the smoothness of the nylon rope causes it to slip out of the groove of the plastic disc which requires you to reset/place it back in the groove. Which is easy enough to do but it shouldn't be coming out in the first place. Should it? This occurred mostly when I was doing movements that required me to pull the unit back at an angle. For example, while attempting to do rows, it slipped out of the groove. I would reset it and it would slip out again. I eventually got it to work but I had to be mindful of my movements so it wouldn't slip out again.

Another issue I had is with the rotation, which is does a great job of. In fact, it was one of the biggest reasons why I wanted this suspension vs., say, a TRX. The rotational aspect of it. But I've found out that even with the pulley wheel locked in place by the pin, the nylon rope still slides every which way. It doesn't stay in place. The only real way to limit the rotation is by allowing the rope to slip out of the groove and get stuck between the pulley wheel and the body that houses the wheel. So even if you don't want to, you're going to rotate.

I didn't quite get why they designed a new model of the CrossCore180 until I tried this one. Which sucks because the new models are a lot more expensive than this model but I assume it's doesn't have all the aforementioned issues as this model does. For what it's worth, it is very well built, but it doesn't operate as advertised. I really wanted to love this thing but right now I'm seriously considering returning it.

Dark Indy
5.0 out of 5 stars good work out, compact space, but still seconds as a cloths rack
Reviewed in the United States on May 9, 2017
Verified Purchase
I had been taking a class at my local YMCA, using the other brand of these straps for a year. They replaced the other brand with this system because it turned out their vendor had unknowingly sold them knockoffs that were breaking during workouts.

I thought I would use it a lot more at the house, so I bought one. I didn't fell guilty getting it because I knew it wouldn't take up any floor space like other workout/cloth rack gear we bought in the past. I use it a lot more than my other workout gear, because I have to pass under it to go to the tv room. So, it was easy to commit to twenty before I sit down and binge on Prime video. It also works nicely for hanging my suit jacket on while I am getting ready to go somewhere. So it still works as a cloths rack, as all work out gear should.
Read more
Helpful
Comment Report abuse

Nolan C. Babcock
5.0 out of 5 stars Great upper arm workout
Reviewed in the United States on November 13, 2018
Verified Purchase
You will need a strong base to get the most out of this equipment but it will give you a great upper arm workout. Haven't tried to shift to the legs but the upper arms will groan after doing this workout.
Read more
Helpful
Comment Report abuse

Mauricio R. Q. Fragale
5.0 out of 5 stars Very good product
Reviewed in the United States on February 4, 2014
Verified Purchase
It's a fantastic tool to help you to keep in shape, specialy if you think in using it for cross training.
By the way, the material they use is of very good quality.
Read more
4 people found this helpful
Helpful
Comment Report abuse

Michele Lynne Marvell
5.0 out of 5 stars Five Stars
Reviewed in the United States on May 26, 2015
Verified Purchase
Love it! Need to be good at knot tying though, which I am not!
Read more
One person found this helpful
Helpful
Comment Report abuse

ChauirG
5.0 out of 5 stars Simple but super effective training device
Reviewed in Canada on September 17, 2018
Verified Purchase
This is a very simple training device. A personal trainer familiar with it showed me how to use it and I love it. It's a fantastic tool to train back muscles and enhance core strength. The only downside is that you must know how to use it in order to get the most out of it and to use it right. It's not "install and go" but rather "install, think, read the manual, then go". If you use it right then it is simply outstanding, its simplicity is genius. I love it.
Read more
Report abuse