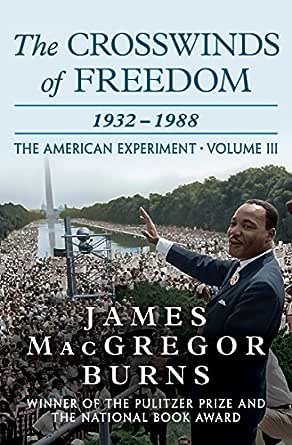 You've subscribed to The American Experiment! We will preorder your items within 24 hours of when they become available. When new books are released, we'll charge your default payment method for the lowest price available during the pre-order period.
Update your device or payment method, cancel individual pre-orders or your subscription at
Your Memberships & Subscriptions
There was an error. We were unable to process your subscription due to an error. Please refresh and try again. 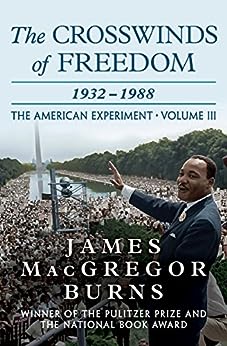 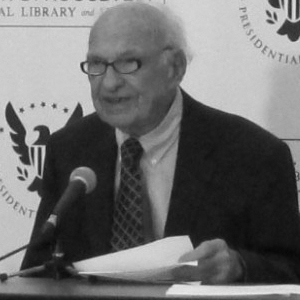 The Crosswinds of Freedom, 1932–1988 (The American Experiment Book 3) Kindle Edition 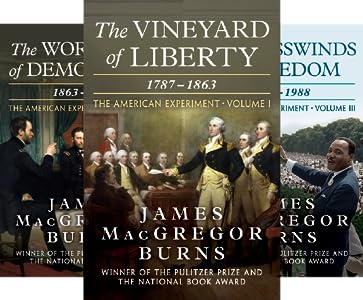 “To some historians, Professor Burns is a fine political scientist. To some political scientists he is a fine historian. In fact, he is the best of both disciplines . . .” —The Washington Post
“Over the past half century, James MacGregor Burns has emerged as America’s wise man on the interplay between politics and leadership.” —David Gergen, CNN Senior Political Analyst and former presidential advisor to Richard Nixon, Gerald Ford, Ronald Reagan, and Bill Clinton

James MacGregor Burns (b. 1918) is a bestselling American historian and political scientist whose work has earned both the National Book Award and a Pulitzer Prize. Born in Boston, Burns fell in love with politics and history at an early age. He earned his BA at Williams College, where he returned to teach history and political science after obtaining his PhD at Harvard and serving in World War II. Burns’s two-volume biography of Franklin Roosevelt is considered the definitive examination of the politician’s rise to power, and his groundbreaking writing on the subject of political leadership has influenced scholars for decades. He currently serves as the Woodrow Wilson Professor of Government Emeritus at Williams College and as Distinguished Leadership Scholar at the University of Maryland.

The boundaries of this final book in Burns's lively history of the United States--the presidencies of Franklin Roosevelt and Ronald Reagan--frequently overlap with the many books written by Burns, the political scientist on his way to becoming a distinguished commentator on our recent leaders and institutions. The result is both strength and weakness. Strength, in that his political analyses and asides on the varying meanings of freedom are very good indeed. Weakness, in that his original works are necessarily richer statements than a survey can be, and in that his treatment of social and cultural matters is overmatched. Even so, his project is unquestionably a fine achievement. This book, which follows The Vineyard of Liberty ( LJ 12/15/81) and The Workshop of Democracy ( LJ 8/85) will be all but universally acquired by libraries.
- Robert F. Nardini, N. Chichester, N.H.
Copyright 1989 Reed Business Information, Inc. --This text refers to the hardcover edition.

Immensely readable, epic in scope yet intimately personal in detail, this sweeping 864-page history of the United States extends from FDR's nomination to the presidency in 1932 to the election of George Bush. Pulitzer Prize-winning historian Burns sees the U.S. as a nation of hazy, undefined ends and shaky, pluralistic means. He admires Roosevelt but criticizes the New Deal because it "failed to fashion an effective economic strategy and stick with it." With 1950s' affluence, he notes, came widespread escapism, intertwining of government and the press, McCarthyism, conformity, compartmentalized work. Burns portrays JFK and LBJ as men who ultimately failed to respond to the cries for freedom emanating from the Third World. He is brief and equivocal on Reagan's rightist counterrevolution, though he recognizes Reagan's mandate to throw liberal elements out of the Republican Party and consolidate conservative power. Chapters broadly delineate the civil rights, feminist and student movements, Vietnam, cultural and technological ferment. This is the final volume of Burns's trilogy which includes The Vineyard of Liberty and The Workshop of Democracy.
Copyright 1989 Reed Business Information, Inc. --This text refers to the hardcover edition.
Read more

4.2 out of 5 stars
4.2 out of 5
4 customer ratings
How does Amazon calculate star ratings?
Amazon calculates a product’s star ratings based on a machine learned model instead of a raw data average. The model takes into account factors including the age of a rating, whether the ratings are from verified purchasers, and factors that establish reviewer trustworthiness.
Top Reviews

Kindle Customer
3.0 out of 5 stars Dry but Informative
Reviewed in the United States on January 15, 2020
Verified Purchase
I am glad to be done with this series. It was education for sure but it was also dry. I learned a lot.
Read more
Helpful
Comment Report abuse

Amazon Customer
5.0 out of 5 stars An enchanting saga through American history
Reviewed in the United States on March 8, 2014
Verified Purchase
I found this volume and the other 2 volumes of this series to be a most compelling read. A true eye opener.
Read more
2 people found this helpful
Helpful
Comment Report abuse

David W. Nicholas
3.0 out of 5 stars Interesting history of Liberal America in the 20th Century
Reviewed in the United States on April 30, 2005
This book is billed as the third volume of James MacGregor Burns' magesterial history of the United States, collectively titled "The American Experiment." Burns is perhaps best known as a biographer of FDR (he won a Pulitzer for one volume of this bio) and he's definitely a New Deal Democrat, though he would probably insist he worked hard to make sure his history of the United States was balanced. It *does* criticize both liberals and conservatives, but the criticisms are nuanced and definitely different.

FDR, it turns out, wasn't liberal *enough* during the New Deal. Reagan turned the word liberty into a weapon of hate. The author is pretty ambiguous about presidents after Roosevelt (his hero, of course) and viscerally dislikes Reagan, especially. Truman, Eisenhower, Kennedy, Johnson, and Carter the author deals with carefully, while Nixon, Ford, and of course Reagan are for the most part dismissed with varying degrees of contempt. Reagan turns out to have been "shallow" and anti-intellectual, while his opponents showed much promise but of course were outwitted by the actor who knew how to manipulate the public.

There's also an annoying thread running through the book which the author tacitly acknowledges but refuses to jettison. He's a rampant cultural relativist, and flaunts it whenever he's dealing with Foreign Policy. As a result, when comparing the Soviet Union, Communist China, and the United States, the author doesn't see much difference between the three nations morally. Either he's unaware of the Gulags and reeducation camps of the two Communist countries (and their lack in the USA) or he thinks such things are irrelevant. He certainly acts as if they don't/didn't exist.

Instead, every facet of liberal society in America gets exhaustive treatment. So various shades of radical feminism get paragraphs, even pages, devoted to them, and the socialist and Communist parties of America are treated as if they were important forces in American politics. Their progress is considered worth discussing even into the '80s, when they became completely irrelevant. By contrast, organizations such as the John Birch society or the Libertarian party (not that I'm a member or supporter of either; I'm not) are never even acknowledged. The art world gets volumes, literature is dissected in detail, but popular art and music are at best briefly alluded to. It's a rather one-sided portrait of America, to say the least.

I found this book to be biased, but of course it all depends on what biases you bring to the book yourself. The writing is generally serviceable, and if the subject matter tends to sometimes make things boring, he never spends more than 10 pages on any subject, anyway. If you're interested in this era of history, I suppose you could do worse, and if you're aware of the biases of the author, it's not a bad outline of the subject.