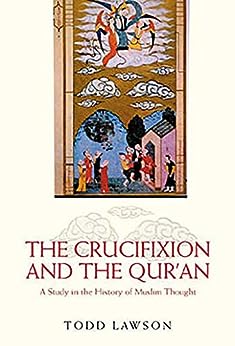 The Crucifixion and the Qur'an: A Study in the History of Muslim Thought Kindle Edition

"With admirable lucidity the book takes us chronologically through all the main interpretations of the key verse where crucifixion is explicitly mentioned." --Michael Carter, Professor of Medieval Studies and Arabic, University of Sydney --This text refers to an alternate kindle_edition edition.

"Compelling reading for all those interested in comparative Christian-Muslim theology and its implications for contemporary inter-faith relations. This important, thought-provoking book harbingers fruitful new trajectories for conversations between Christians and Muslims." --This text refers to an alternate kindle_edition edition.

"Todd Lawson offers his readers the most thorough study ever of the two Qur'anic verses appearing to deny the crucifixion of Jesus. Some of his conclusions are as startling but all of them are thoroughly researched and documented." --This text refers to an alternate kindle_edition edition.

Todd Lawson is Associate Professor at the Department of Near and Middle Eastern Civilizations, University of Toronto. He is the author of Reason and Inspiration in Islam: Theology, Philosophy and Mysticism in Muslim Thought. --This text refers to an alternate kindle_edition edition.
Read more

T
5.0 out of 5 stars Great book on an important subject!
Reviewed in the United States on December 1, 2017
Verified Purchase
Who knew that some early muslim exegetes accepted the crucifixion and death of Jesus!? Well Todd Lawson did and he wrote an excellent book outlining what major tafsirs said on the subject. Much of this is well known, such as the substitution theory found in the tafsir attributed to ibn Abbas but other theories are unknown and are laughed at by the Muslims I conversate with on the subject.
Lawson goes into detail to show the logic of each exegete. Some exegetes used linguistics to come to their conclusions, other reinterpreted Quran verse 4:157 in light of other verses that talk about the nature of death.
I recommend this book for any Muslim who wants to be honest with all the historical evidence for the crucifixion and still reconcile it with the popular belief that Jesus did not die.
Read more
2 people found this helpful
Helpful
Report abuse

Arkansaw Traveler
VINE VOICE
5.0 out of 5 stars Excellent Scholarly Work on the Muslim View of the Crucifixion of Jesus
Reviewed in the United States on March 22, 2009
Verified Purchase
Author Todd Lawson has written a scholarly specialist's work centered on a single passage in the Muslim Qur'an (Koran) that presents the Muslim theological view on the crucifixion of Jesus. It is this passage that created a major theological impass between Muslims and Christians with the idea that essentially the Qur'an denies the crucifixion of Christ.

The author presents multiple translations and interpretations of the passage initially for examination, but basically it is Qur'an 4:157; "They did not kill him and they did not crucify him, rather, it only appeared so to them."

"They and them" refers to the Jews (fully discussed), and many of the early Islamic writings developed the idea of a substitute for Jesus being crucified. The Qur'an and other writings accept that a crucifixion took place, but the idea is that the appearance/form of Jesus was placed on another individual who was crucified while God lifted Jesus up to the heavens.

However, author Lawson shows that Muslim authorities and scholars are divided on the exact meaning of the passage and that there is some room for discussion and re-interpretation. For readers not well versed in the Bible and the Qur'an, this book will be little more than a curiosity, but for those interested in developing better religious understanding between Christians and Muslims it is essential reading. Although most Christians have heard and most Muslims believe that the Qur'an denies the crucifixion of Jesus (his death and resurrection) -- one of the cardinal features of Christianity, there is possibly some wiggle room in this major point separating the two religions.

Lawson approaches the passage and the Muslim writings concerning the crucifixion strictly from the Muslim side as is appropriate for a true scholarly discussion. He goes forth essentially from the point of view of Neal Robinson in the "The Encyclopaedia of the Qur'an", under the entry "Jesus", edited by J.D. McAuliffe.

Robinson's points were three: (1) the Qur'an attaches no salvific inportance to Jesus's death; (2) it does not mention the resurrection on the third; and (3) although the Jews thought they had killed Jesus, from God's viewpoint they did not kill or crucify him. Everything beyond that is up for grabs and speculation.

Lawson then reviews contributions to the Muslim tradition in selected works of exegesis from the earliest Muslim writings to the present. This presentation takes up the bulk of the book and clearly proves that the indicated passage has been subject to various interpretations. The early exegetes apparently drew on non-Muslim sources, most likely of Christian and Jewish origin. Then the exegetes tended to purge interpretations based on non-Qur'anic sources.

The conclusions leave the debate open but on an optimistic note. Frankly, my take on the subject was less optimistic than the author's.

As I noted earlier, I recommend this work to scholars and specialists, but not to the general reader. Nonetheless, it is a fine piece of scholarship and should advance knowledge and understanding in the Christian world.
Read more
29 people found this helpful
Helpful
Report abuse

Jane Kazeem
5.0 out of 5 stars A really fair, unbiased study of the Quran verse
Reviewed in the United States on April 11, 2014
Verified Purchase
I loved this book! I think it was completely fair in its study of the verse in the Quran about the crucifixion of Jesus. Great details and references. Gave me things to think about. I've read some of Todd Lawson's writing before, but not a complete book. I'm sure I'll buy more of his books in the future.
Read more
3 people found this helpful
Helpful
Report abuse
See all reviews

harkabir
1.0 out of 5 stars Wrong book despatched. Why?
Reviewed in India on March 6, 2017
Verified Purchase
Book received "current affairs round up"
Read more
Report abuse
See all reviews
Back to top
Get to Know Us
Make Money with Us
Amazon Payment Products
Let Us Help You
EnglishChoose a language for shopping. United StatesChoose a country/region for shopping.
© 1996-2021, Amazon.com, Inc. or its affiliates