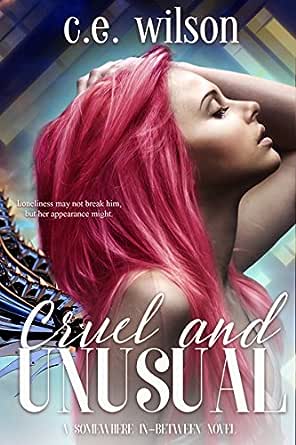 You've subscribed to Somewhere In-Between! We will preorder your items within 24 hours of when they become available. When new books are released, we'll charge your default payment method for the lowest price available during the pre-order period.
Update your device or payment method, cancel individual pre-orders or your subscription at
Your Memberships & Subscriptions
There was an error. We were unable to process your subscription due to an error. Please refresh and try again. 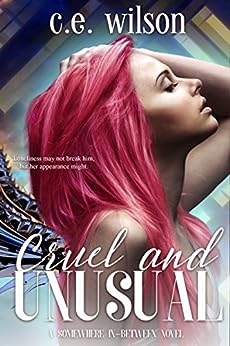 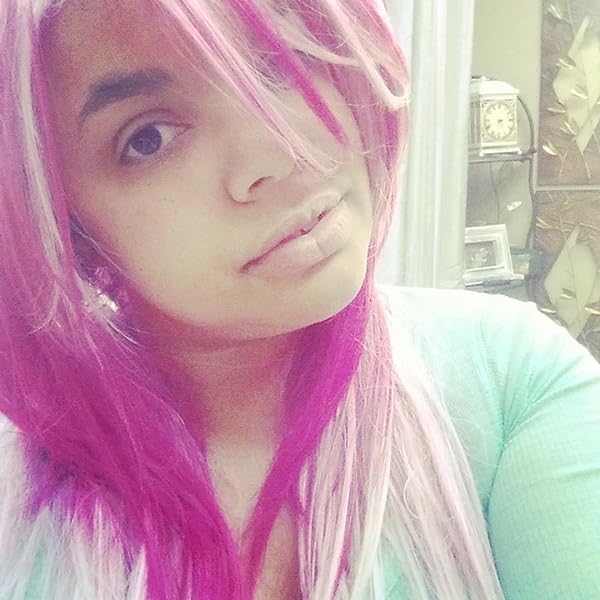 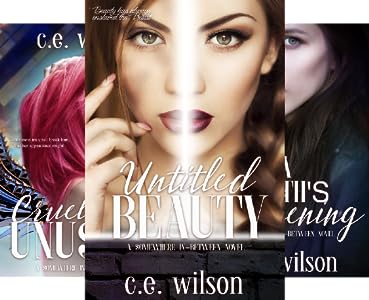 "You will definitely be on the edge of your seat throughout this book." - Indiependentbookbabes

"I thoroughly recommend this book to all who love a sweet and intriguing story, and also to those that don't because it is that good." - Goodreads Reviewer

"A well written, meaningful and magical story that you can't help but be captured by." - Lady Living in Bookland

"Wow. C.E. Wilson has outdone herself with Cruel and Unusual." - Dana @ Goodreads

"It's a wonderful story of a different kind of heartache and pain." - Saira Mendoza @ Goodreads

C.E. Wilson is a Secondary English Education graduate from Millersville University of Pennsylvania currently living in Pittsburgh with her husband, daughter, chubby beagle and two cats.

C.E. published her first book in 2012 entitled Oath of Servitude and hasn't looked back since. She now has over ten books published and plans to keep writing until her fingers and wrists put up a formal protest. Her favorite genres to tackle are Young and Clean New Adult and she's beginning to dabble with light horror.

When C.E. isn't writing or spending time with her family, she enjoys watching America's Next Top Model, reading shoujo manga and shopping for leggings. She enjoys autumn, all things pumpkin, 90s music, and coffee with way too much cream. She also believes that love is just beyond your comfort zone.

4.3 out of 5 stars
4.3 out of 5
55 customer ratings
How does Amazon calculate star ratings?
Amazon calculates a product’s star ratings based on a machine learned model instead of a raw data average. The model takes into account factors including the age of a rating, whether the ratings are from verified purchasers, and factors that establish reviewer trustworthiness.
Top reviews

Sunshine Somerville
4.0 out of 5 stars Great read
Reviewed in the United States on October 12, 2017
Verified Purchase
I picked up this book on a whim and because the cover is gorgeous. The writing grabbed my attention in the first few pages, and I could tell this author had worked hard to craft this story. Then, the uniqueness of the story kept me reading to the end.
While the setting is sparse and simple, there’s much going on inside Malcolm’s mind. This book tackles some dark psychological issues, and this setting works perfectly to illustrate the damage of isolation. Even though Malcolm is selfish, guilt-ridden, quick to anger, and blindly obsessed with his past girlfriend, you feel bad for him. Anyone left alone this long is bound to lose some of their humanity. Anyone who gets stuck in this experimental prison…that’s unlikely to end well.
Now, as for the “unusual” character of the story, I loved how I was never sure what Verity really was. You want her to be real for Malcolm’s sake, but at the same time his reactions to her show the effects of his situation and how his mind might be slipping. The dynamics there get weird, but also meaningful.
The title has many levels of meaning, and I noticed that more and more as I read. There’s the usual meaning of cruel and unusual punishment. There’s Malcolm who’s cruel and Verity who’s unusual. There’s the whole situation with Mauve. It all works together to make for a very complex, unique read which leaves you thinking that this world is really, really not right.
Read more
One person found this helpful
Helpful
Comment Report abuse

Pete Tarsi
5.0 out of 5 stars Unusual and awesome!
Reviewed in the United States on March 9, 2017
Verified Purchase
As a fellow self-published author, I am both awestruck and envious of C.E. Wilson. Her output of work since I’ve started blogging is impressive to say the least, and I wish I could be as prolific as she is. I’m just as amazed by her imaginative plots and characters as I am by their integration with deep meaningful themes. I am thrilled for her that she has been experiencing the success she does, and I always look forward to her regular book releases.

Her latest effort, Cruel and Unusual, is her second “Somewhere-in-Between” story, though it has no connection to the first, Untitled Beauty. I know that she’s a big fan, like me, of the classic TV show The Twilight Zone, and what she’s going for here is a collection of stories in worlds slightly off from our own where she can explore important themes and ideas about the human condition. That’s what good speculative fiction is supposed to do—use the speculation to address life as we know it.

Cruel and Unusual posits an America with a new method of incarceration. Certain prisoners can be left to fend for themselves in little caged-in areas on the Aleutian Islands of Alaska. Malcolm Davenport, the narrator of the story, is imprisoned there for his crime. I won’t reveal the crime, but suffice it to say that it is ultimately revealed in the story, and I appreciate the gray areas within it. He shares his island with Flynn, another prisoner. A trio of wardens—each with his/her unique temperament—arrives periodically to check on the prisoners and replenish supplies. They also provide some geopolitical background about the program, particularly whether the government approves of it and whether that or a rival government may be spying on it.

Then, seemingly out of nowhere, a winged creature arrives in Malcolm’s cage. Not a bird or any other animal, but a foot-tall woman with bright blue eyes, bubblegum pink hair, and metal wings protruding from her back. She eventually introduces herself as Verity Nine, part of an experimental program of which she has very spotty memories. Is she a person who has been miniaturized and fitted with wings? Is she some sort of human-mechanical hybrid—a vessel for a former human’s soul? Or is she something else? Not gonna spoil that for you, because though her origin is interesting, her ensuing relationship with Malcolm is more intriguing.

And that’s where the message behind this book really kicks in and elevates the story to one of Wilson’s best.

Being so isolated about two years into his sentence, Malcolm is extremely lonely. To make matters worse, he’s pining over his former girlfriend Mauve. The isolation and loneliness is really getting to him. Meanwhile, since Verity may very well be a one-of-a-kind entity or creation, she’s experiencing her own kind of isolation. This story explores how the two of them—and therefore how people in general—have an innate need to be around other people; to forge relationships with other people. It also explores how people view and judge other people, whether by their looks (such as the case of Verity’s small size) or by their actions (such as the case of Malcolm’s imprisonment). The only way the two of them can get through their loneliness and their judgements of each other is to stop and listen. Isn’t that true of everyone? In order to understand one another, we need to listen and be able to accept differences.

Because this is a C.E. Wilson story, there’s going to be a thought-provoking open ending. In this book, she doesn’t disappoint. There’s satisfying ambiguity at the end, particularly in wondering what the future holds for the main characters and what actually went on between them throughout. I refuse to say more, but I found it to be her most satisfying ending among all of her works.

However, the discussions between Malcolm and Verity sometimes get repetitive. This issue isn’t new to Wilson’s books, and it isn’t as distracting as in some of her other books, but it’s the only quibble I have that holds me back from giving it five stars. Is that being cruel? I don’t know, but this well-crafted and unusual book surely deserves its FOUR AND A HALF STARS.
Read more
Helpful
Comment Report abuse

Kristin
4.0 out of 5 stars Good, unique, but the end left me wanting
Reviewed in the United States on April 28, 2017
Verified Purchase
Funniest thing about this book - I told my husband I really hadn't meant to read it! I was simply trying to choose one from my Kindle, and after I clicked off the description, I got sucked right in to the first chapter and couldn't stop.

I really enjoy the author's unique story, the way she develops suspense, great character building, good crafting overall. The only thing I would say is the ending doesn't resolve. I know some stories intentionally leave you with questions, but this ending didn't seem to quite have that feel. Can't describe why, exactly. Felt like it almost needed an epilogue, or a little more resolve in some way, because even stories that don't "end" have some sort of resolve at the end. Because of that, I gave it only 4 stars.
Read more
Helpful
Comment Report abuse

Bridgett B.
5.0 out of 5 stars LOVE LOVE LOVE THIS BOOK
Reviewed in the United States on February 17, 2017
Verified Purchase
Malcom is doing time on a remote island in Alaska for a crime he committed, he is alone with his art. He has a neighbor he talks to a little bit and the guards who come once in a while to bring supplies and check up on him. His time is spent reflecting...until one day, Verity Nine literally crashes into Malcoms prison. First, I fell in love with the cover & then I fell in love with the novel. Grab this book
Read more
One person found this helpful
Helpful
Comment Report abuse

Kindle Customer Farrbee
4.0 out of 5 stars Good read
Reviewed in the United States on July 26, 2017
Verified Purchase
I have only read the one book in the series, and it was the second installment. After reading the first chapter of the extra one, I think they are kind of "stand alone" novels. I will see after I finish the series. I did like the story very much and look forward to the next story.
Read more
2 people found this helpful
Helpful
Comment Report abuse

Hope Gerhardstein
5.0 out of 5 stars A surprise visit
Reviewed in the United States on March 4, 2017
Verified Purchase
I found this story to be unique. I liked the character development. Malcom is doing time on an isolated island for a crime he committed. I was anxious to find out what he had done. He has one neighbor but they can't touch each other. Then Verity Nine, a very interesting character enters the story. I felt sympathy for Malcolm and Verity and hate for Warden Milo. A good read and difficult to put down.
Read more
Helpful
Comment Report abuse