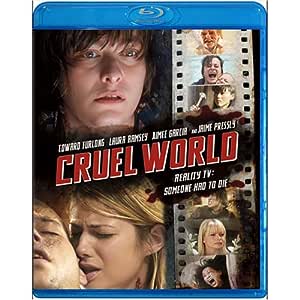 Secure transaction
Your transaction is secure
We work hard to protect your security and privacy. Our payment security system encrypts your information during transmission. We don’t share your credit card details with third-party sellers, and we don’t sell your information to others. Learn more
Details
Ships from
Huber Music & Video
Sold by
Huber Music & Video
New & Used (17) from
$2.67 + $3.99 shipping

Millions witnessed Philip Markham's (Edward Furlong, Terminator 2: Judgment Day) public humiliation when he got dumped by Catherine, the beautiful star (Jaime Pressly, TV's My Name Is Earl) of a popular dating show, and now--several years and reality series later--he wants revenge. After taking Catherine captive, he lures nine unsuspecting co-eds to her luxurious mansion in the middle of nowhere, trapping the contestants in his own sick version of reality TV--where the challenges are bizarre, the danger is real and death is just a competition away.

2.9 out of 5 stars
2.9 out of 5
27 global ratings
How are ratings calculated?
To calculate the overall star rating and percentage breakdown by star, we don’t use a simple average. Instead, our system considers things like how recent a review is and if the reviewer bought the item on Amazon. It also analyzes reviews to verify trustworthiness.
Top reviews

Reuben L. Pruett Sr.
1.0 out of 5 stars Jaime Pressly was the only good thing about this show.
Reviewed in the United States on December 3, 2020
Verified Purchase
The writer has the mentality of a 6th grader.
Everything you in reality wouldn't do, they did.
So much for reality.
The one star is for seeing the beautiful Jaime Pressly.

Anon
3.0 out of 5 stars Nasty, But Not Without Charm
Reviewed in the United States on December 4, 2020
Verified Purchase
An incel (Edward Furlong) produces a fake reality show where college students are starved, tortured and killed. The character played by Daniel Franceze (sp?) is far too politically incorrect for our current tender times. I liked this one when I saw it on cable in the mid-'00s, and I like it now, but it's not for everyone.
Read more
Helpful
Report abuse

Robin F.
1.0 out of 5 stars Not even good for a cheesy slasher
Reviewed in the United States on September 10, 2017
Verified Purchase
An absolutely terrible movie, even for someone (me) specifically looking for really cheesy campy slasher flicks. It's no wonder Edward Furlong doesn't get many roles anymore. This is 90-plus minutes if my life I'll never get back.
Read more
One person found this helpful
Helpful
Report abuse

jemd
1.0 out of 5 stars Cheap, blahhh
Reviewed in the United States on September 1, 2017
Verified Purchase
Blahhhh...cheap...pos!...oh, good chance to get away, so i'll run back in the house and hide under table by the door!! What?!
Read more
One person found this helpful
Helpful
Report abuse

*Maureen*
3.0 out of 5 stars Great idea, love the actors, but...
Reviewed in the United States on February 18, 2009
Verified Purchase
honestly i bought this movie because the concept sounded different and the actors although not "popular" per say are some of my faves (andrew keegan!!!) as a previous post stated the execution of the movie could have been better yet it is still an original idea about a reality show loser who retaliates by creating his own reality show where the voted off members actually get killed off. if you like the actors edward furlong, andrew keegan then buy this but if your looking for an "awesome" movie that your going to watch over and over again this is not that movie. also jamie pressly pulls a drew barrymore (think scream). they make her seem like the star but shes gone within the first ten minutes.
Read more
2 people found this helpful
Helpful
Report abuse

Johnny
1.0 out of 5 stars One Star
Reviewed in the United States on September 18, 2017
Verified Purchase
probably the laziest filmmaker's film ever made...
Read more
One person found this helpful
Helpful
Report abuse

Christopher J. Scharer
3.0 out of 5 stars Close enough...
Reviewed in the United States on September 13, 2017
Verified Purchase
Not to far off.
Read more
Helpful
Report abuse

M. Gariti
2.0 out of 5 stars Edited copy.
Reviewed in the United States on May 23, 2012
Verified Purchase
CRUEL WORLD was a great movie because it dealt with a boy (Edward Furlong) whose low popularity pushed him to the edge, so he decided to do something, violent and life-ending, about it. Which doesn't sound right unless you've been in the bullied kid's shoes before. This kind of thing may go through someone's mind, but this movie shows what happens when the line between fantasy and reality blur and everything falls apart.

Why 2 stars then, if it does such a great job? Because the original, with a well deserved NC-17 Rating, did a great job. For whatever reason the company chose to only re-release the terrible R Rated cut on blu-ray, in which less than 33% of the story is even TOLD, let alone depicted. It's a terrible let-down.

Shawn
1.0 out of 5 stars Cruel World
Reviewed in the United Kingdom on November 27, 2011
Verified Purchase
"Cruel World" is a movie without a plot, without anything! There is only senseless violence on young people who think that they are contestants on a reality show. It is misleading that the cover of the dvd says "starring Jaime Pressley" because the beautiful Ms. Pressley appears only in the opening 5 minutes of the film. The rest of the cast are unknowns, at least to me they are. The entire film takes place on an estate where the so-called reality show takes place. In my opinion it is a very low budget film that went directly to dvd.

After watching it I asked myself, "what was that all about?".

If you have money to waste then purchase this dvd movie.
Read more
Report abuse
See all reviews