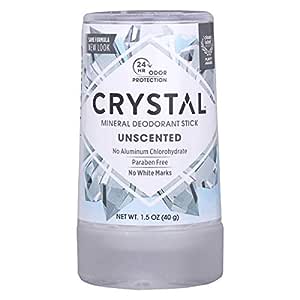 Comprised of naturally-occurring mineral salt that is effective at preventing odor when used on clean skin.

The Original Mineral Deodorant, this powerful, one ingredient mineral stick eliminates and blocks odor before it starts; without using harmful or harsh chemicals. This effective mineral odor protection offers long-lasting, natural mineral protection for up to 24 hours. With daily suggested use, can last over a year.

For external use only

for prevention of body odor

Lightly moisten top of stone and apply generously to clean skin. Caution: do not store or leave on marble or granite.

Actual product packaging and materials may contain more and different information than what is shown on our website. We recommend that you do not rely solely on the information presented and that you always read labels, warnings, and directions before using or consuming a product. Please see our full disclaimer below.

4.2 out of 5 stars
4.2 out of 5
2,200 global ratings
How are ratings calculated?
To calculate the overall star rating and percentage breakdown by star, we don’t use a simple average. Instead, our system considers things like how recent a review is and if the reviewer bought the item on Amazon. It also analyzes reviews to verify trustworthiness.

M. Zobian
5.0 out of 5 stars IT WORKS.
Reviewed in the United States on February 1, 2018
Verified Purchase
THIS WORKS. I'm a male with (I think) average armpit sweating and body odor. I just got this and it worked on day one. In fact, it worked BETTER than my previous deodorant, which is Dove Sensitive Skin; at the end of the day I now have far less body odor under my arms. I suspect that some folks don't get good results because they either have different sweat chemistry and/or they aren't applying it correctly. Here's what I do: I step out of the shower in the morning and dry off everywhere EXCEPT my armpits. I then take the Crystal Deodorant and rub it with 40 or so quick strokes under each arm. That's maybe 10 seconds under each arm and I rub it all over to get good coverage. (NOTE: since the underarm is still slightly wet, the crystal runs smoothly over it, no grit or rubbing. If you accidentally dried off your armpits, simply put a couple drops of water on the crystal
- no more than that - before using.) Then I shave and get dressed. No need to "dry out" your arm pits, they shouldn't be that wet anymore anyway.
I bet the people it doesn't work for are only doing 5 or 6 strokes, as if it was a regular deodorant stick.
This technique also means I don't put the crystal under the faucet where water could drip into the holder, loosen the crystal, and eventually make it fall out and shatter on the floor. Take care of this thing and it will last a year. The travel size is brilliant. It's all you need, frankly.

Disasterrr
5.0 out of 5 stars It works, but you need to do some research before using it
Reviewed in the United States on July 15, 2020
Verified Purchase
It works differently from regular deodorants. You will still sweat, but your sweat will be more like water, less smelly and sticky. It's best to apply this right after a shower. You have to wet the crystal with water before applying, so you would actually rub yourself with alum solution in water.
It's not aluminium-free. Alum is a mineral salt that does contain an aluminiun atom, but it's not the same salt as aluminium chlorohydrate used in regular antiperspirants.
For me the best thing about it is that it's a mild topical antiseptic and the best remedy for razor burn under arms. You can also use it for other minor scratches.
A small amount goes a long way, the travel-size stick is enough for a few months of daily use. But long before you use it up, it loses it shape and detaches from the base. You can also easily shatter it if you drop it. Shards are still good to use but they are just not handy, you will have to keep them in some cup or plastic box.
Read more
13 people found this helpful
Helpful
Report abuse

Brittany Nassif
2.0 out of 5 stars Not great for sensitive skin.
Reviewed in the United States on September 9, 2019
Verified Purchase
I was very excited to use this! However, It only worked for my husband and not for myself with sensitive skin. I’m not too sure how to get rid of this rash now and it’s been a couple days.. I can’t even shave which is embarrassing because my underarms burn so bad..
Read more

Bryan J. KautzmanTop Contributor: Pets
2.0 out of 5 stars A skeptic's review
Reviewed in the United States on September 30, 2020
Verified Purchase
I need deodorant.

If I shower at 6:00 AM, even if I'm sitting in a freezing cold room for the next six hours, I'll smell reallyl ripe by noon if I don't have any deodorant on. The way I see it, deodorants that claim to offer 24 hours of protection are only really giving us 18 hours of protection because I get about six from my shower.

I am a Degree user. I've been using Degree for years. It's the white chalky stuff. I use it because it works. No gimmicks. No frills. In fact, when I use Degree, it doesn't matter how long I go between showers. My pits just don't ever stink.

So I am comparing this product to Degree, the best Deodorant on the market. It's kind of a lopsided contest.

First of all, I need to say that this stuff does work. I could have told you that by 12:30 on day one. I was quite impressed. It's like a rock that you rub over your skin. It seemed like I had gotten hoodwinked by some homeopathic fairy godmother. But I gave it a try.

When I went to bed on day one, it didn't smell "pleasant" there. That's why I can't give it five stars. It didn't smell ripe, either, though. You see, the problem with the normal state of things is that when I don't wear deodorant, or when I wear deodorant that doesn't work, the smell is really, really strong. As in, I have a hard time believing that the people who live next door can't smell me. After using Crystal Solid, I had to get my nose really close. I didn't like the smell, but I was somewhat content in the fact that I couldn't smell it more than, say a foot away. It took the edge off, so to speak.

EDIT: After using this for a couple of months, I have found that my freshly laundered shirts were starting to smell bad. After thinking on it a while, I switched back to Degree to see what would happen. After a few more launderings, the body odor smell from my shirts did start to fade. I can only assume that this is due to using this deodorant, and I'm going to have to knock a couple of stars off for it. I can't have this be my regular deodorant with this nasty side effect.
Read more
6 people found this helpful
Helpful
Report abuse
See all reviews

Sandra dee
5.0 out of 5 stars Never be afraid to try new things
Reviewed in the United Kingdom on July 13, 2019
Verified Purchase
I. Have swapped my spray deodorant for the crystal stick I was a bit dubious at first but having been using it for a week I'm
Completely sold on it and wii never use deodorant spray again
Read more
Report abuse

Amazon Customer
5.0 out of 5 stars Works well
Reviewed in the United Kingdom on November 26, 2018
Verified Purchase
I saw a review about this on a “travel must have” post. Was skeptical however it works! My skin doesn’t feel greasy and I feel fresh. Will put it to the test when on holiday
Read more
Report abuse

Ben Tuck
4.0 out of 5 stars Not sure how it works but it does!
Reviewed in the United Kingdom on November 26, 2018
Verified Purchase
This works! I was very sceptical as I use quite strong deodorant but this so far has proven to work, even after dancing the night away and at the end of a pretty intense gym class. Just wish it was scented so have been adding a nice smelling natural deodorant on top. Arrived quickly and so glad I gave it a try!
Read more
Report abuse

Trixi Field
5.0 out of 5 stars Reliable
Reviewed in the United Kingdom on March 17, 2013
Verified Purchase
Does what it says on the tin. Rub it on after a shower when the skin is still wet, and you don't pong! Well, it seems to work for me, or else I'm surrounded by terribly polite people!
Read more
Report abuse