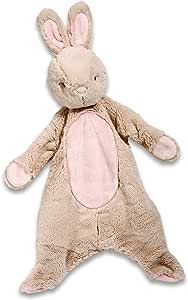 Brand: Douglas
4.8 out of 5 stars 155 ratings
| 4 answered questions
Amazon's Choice recommends highly rated and well-priced products.
Amazon's Choice for "douglas baby"
Available at a lower price from other sellers that may not offer free Prime shipping.

Smiles and laughter are just a hop, skip, and a jump away when baby snuggles up with our adorable little cuddle bunny SSHLUMPIE soft toy! Made with ultra cuddly plush materials This rabbit is a gentle, soothing friend. Designed with versatility in mind, our sshlumpies work just as well as a Blankie or as a stuffed animal. Their under stuffed nature makes them lightweight and easy to pack and carry. Sophisticated colours and friendly characters make them welcome additions to nurseries or delightful baby shower gifts. This sweet faced bunny sshlumpue features cozy tan fur with pastel pink accents and baby-safe embroidered details. Mix and match other accessories from our little cuddle bunny collection to make a custom set for yourself or to give as a gift!

douglas's highly skilled in-house design team has been crafting beautiful plush companions in keene, new Hampshire since 1956. Products designed specifically for infant and toddlers have been a tradition since our early days. Today, our baby Cuddle Toys line is more exciting than ever, thanks to a host of whimsical animal characters featuring high quality materials and sophisticated designs. The different accessories can be mixed or matched to build attractive coordinating sets. All the toys in our cuddle baby line have undergone strict testing and are safe for infant use.

REMOVE ALL PLASTIC TAGGERS, HANGTAGS AND/OR RUBBER BANDS BEFORE GIVING TOY TO CHILD.

4.8 out of 5 stars
4.8 out of 5
155 global ratings
How are ratings calculated?
To calculate the overall star rating and percentage breakdown by star, we don’t use a simple average. Instead, our system considers things like how recent a review is and if the reviewer bought the item on Amazon. It also analyzes reviews to verify trustworthiness.

My Redeemer Lives
5.0 out of 5 stars Cuter in person ❤ awesome lovey
Reviewed in the United States on July 19, 2017
Verified Purchase
The picture just doesn't quite do this little bunny justice. It really is an adorable and irresistibility soft toy. I docked a star because as much as it's cute, it still kind of looks like a dead stuffed toy... I kept going back and forth on whether I even really liked the thing. But my 6 month old gets the final say, and she really likes rubbing it while nursing. She just pets it, or she plays with the tag, or she rubs it on her face, ear, and head until she falls asleep with it. So, if she likes it, then I like it 😊
**UPDATE** I fixed my 4 star review to 5 star. My daughter has now had this thing for a year and a half. It goes everywhere, she sleeps with it, it's been washed and dryed hundreds of times, pretty literally. Its still in great shape. No holes, no tears, she's worn it's fur into dred lock type feeling, but it's well loved. I've always called it "Bun-Bun" but here recently my almost 2 year old dubbed it "Ba-ma". It's been a great lovey, and is holding up awesome!
**************************************************
Just do yourself a favor and buy like 5 of these. I got 2 thinking we should be good. Well one got lost, idk where it went, but its gone. So I've been diligently trying to keep up with the other one. Sometimes it gets lost, so I ordered a new back up. Well, the horror and drama! She knows it's not the same one. She refuses to lay down with it. Its ok for carrying around during the day, but come nap time or bed time, forget it! Just do your future self a favor and get a bunch and rotate them so they all look and feel the same. Only a toddler head over heels in love with their lovey would choose a ratty old matted thing over a brand new silky soft one lol

clrdogrl
5.0 out of 5 stars Can it get any cuter?
Reviewed in the United States on November 2, 2018
Verified Purchase
I thought “lovey’s” didn’t happen until babies were older. I bought this because my daughter loved the feeling of her plush blanket but kept pulling it over her head in the car seat, swing, etc. And this sshlumpie seemed soft and lightweight. I did wash it several times so there was no shedding. My daughter took to it right away. She’s still young that she’s not attached to it but she does love to grasp it and hold it when it’s around. It reminds me of a stuffed animal without the stuffing. Very similar to what the dog toys look like after a massacre and the white fuzz is everywhere in the living room and all that reminds is the hide of the unlucky animal that fell victims while your dog prances around because he was able to pull the squeaker out.
Read more

PinkAngel1229
5.0 out of 5 stars LOVE!
Reviewed in the United States on May 6, 2020
Verified Purchase
This gal (my daughter says it’s a girl lol) is the best!! She received this as a gift when she was born from my cousin and it’s literally been with her every since. She’s almost 3!

The reason I’m writing a review so many years later is because I’ve bought two more as backups. Lol My daughter seriously can’t live without her “baby” so I bought a spare in case. I knew it would get lost at some point and she would FREAK OUT, and everyone wants to avoid a toddler freak out. Well, guess what, we lost it one day and we were at so many different places I had no clue where it could be and I wasn’t about to go back to every single place. So, spare bunny for the win! Once we used the spare, I ordered another in case it happened again.

This bunny is extremely soft and cuddly!! Our first one lasted several years and although it didn’t look brand new anymore, because it’s been dragged all over the place, she was still soft! Never got to a point where I felt like it was just falling apart. Aka this is a quality item!! I highly recommend this product and hope another little boy or girl finds a “baby” they will love forever!

Rabidus Matris
VINE VOICE
5.0 out of 5 stars So Fluffy you can’t see the eyes
Reviewed in the United States on August 9, 2019
Verified Purchase
As others have noted in their reviews, the eyes aren’t really visible. This was not an issue for us, but it may be for some folks so it was worth noting.

Honestly, this reminded me of the Velveteen Rabbit. And when I showed my mom the listing, it was the first thing she said too.

It’s truly soft and cuddly. We were looking for a comfort object that could be made small to fit into a backpack. The current comfort object it too big for packing. It rolls to slightly larger than the head, if that interests you, slightly bigger than my hand. It can be unrolled quickly into a huggable shape and size. This is just what we were looking for and we are very pleased.

KDB
5.0 out of 5 stars Perfect first friend!
Reviewed in the United States on April 21, 2020
Verified Purchase
I gave this to my 3.5 month old granddaughter for her first Easter. She loves it! The bunny is super soft and easy for her to cuddle with. Seems to be very well made. She loves to squeeze it in her hands and hold it up to her cheek. My daughter and I each ordered another ( her the fox, me the Clifford the dog) so that we will have them to give her while the bunny is in the wash. I love that this is a friend that she will grow with and easily take to grandma's or daycare. These animals are rated for birth and up. Embroidered eyes, very soft, and a good size.
Read more
Helpful
Comment Report abuse

The only thing is: I wish it was made of natural fabrics 🤷🏻‍♀️
But it’s probably too much to ask for lol

Other than that, it’s great and just as described!
And it works for us
Read more
4 people found this helpful
Helpful
Comment Report abuse

CampFamily14
5.0 out of 5 stars Great Little Snuggler
Reviewed in the United States on April 21, 2015
Verified Purchase
This is a great little toy. My 10 month-old is still too attached to her muslin blankies to take much interest in him, yet, but I think he will grow on her over time. It does shed a little bit when you first get it, but not a lot. Just give it a good shake and maybe "pet" it a few times. It seems to be very well made.

The only small issue I've found is that when you squish the little guy in your hands, you can kind of feel the mesh backing of the fabric rubbing against itself in there. Not a huge problem, but it is something I noticed (I'm kind of a touch-sensitive person.). It's something you might want to keep in mind if you're buying this for a child who has sensory issues. For someone like me, it's a little bit grating to the nerves.

Amazon Customer
5.0 out of 5 stars Makes me want to be a baby
Reviewed in Canada on July 29, 2020
Verified Purchase
It’s so big and soft! My girl squealed with joy when she saw it!! I hope it becomes her most treasured lovey. It’s great quality
Read more

Page 1 of 1 Start overPage 1 of 1
This shopping feature will continue to load items when the Enter key is pressed. In order to navigate out of this carousel please use your heading shortcut key to navigate to the next or previous heading.
Back
Next
Pages with related products. See and discover other items: unique stuffed animals, horse toy animals, easter gifts for toddlers, Best easter toys for babies