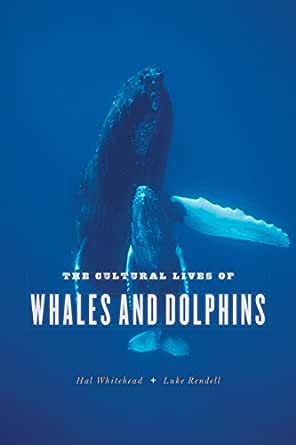 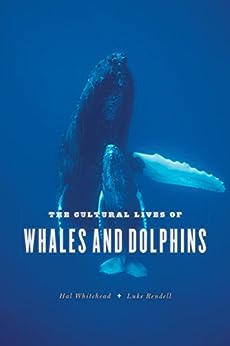 The Cultural Lives of Whales and Dolphins Kindle Edition

“In every generation, there are some scientists who transcend the strictures of their disciplines, who decline to be confined by ordinary thinking. Whitehead and Rendell are two such people, for our own time. Perhaps it is something to do with the enigmatic beauty of the animals they study. Or perhaps their own brains are better evolved than the rest of ours. Whatever the reason, this book is an astonishing, unconstrained exploration of the nature and practice of cetacean culture. Placing it side by side with human culture, the authors show that the expression of ideas is not limited to humans or primates. Exciting, witty, with its finger—or should that be flipper?—ever on the pulse, wearing its profundity with a wonderful lightness of touch, The Cultural Lives of Whales and Dolphins is a revolutionary book. Transcending the notion of a ‘science’ book, it contains explosive new concepts for our understanding not only of whales, our watery cousins, but of our own selves, too.”
-- Philip Hoare, author of "The Whale" and "The Sea Inside"

“Whitehead and Rendell tie together decades of research and observations of cetacean behavior, add in other compelling examples of culture in animals, and relate this to what we think of as culture. This work is unique, and I plan to quote parts of it for years to come. For anyone with an interest in how whales and dolphins live their lives, this is a must read.”
-- Charles “Flip” Nicklin, photographer and author of "Among Giants: A Life with Whales"

“An amazing book. . . . Outstanding, not just because it regales the reader with the many insights the pair have gained from their decades of research, patiently watching whale behavior, but also because it challenges us to consider those ever-present cultural forces that shape us all into modern human beings, similar and unique as we all are.”
-- Philippa Brakes, Whale and Dolphin Conservation, WHALE&DOLPHIN

“There are few environments that are more hostile and present more of a challenge to mammals than the ocean. This is precisely why, Whitehead and Rendell argue in their new book The Cultural Lives of Whales and Dolphins, just like us, knowledge is also a vital currency for these marine mammals. . . . At times it is a humorous journey through aspects of human behaviour and ‘decision making,’ resulting as it does from cultural pressures. But this apparent irreverence is not without deeper meaning and strong intent. . . . They provide some sobering insights into those ubiquitous cultural forces that shape us all into modern human beings and at times can leave you reeling with questions about your own free will. This is an exceptional book; it will no doubt irritate some anthropologist who believe that culture is the domain of humans alone; it may even rile some theologians; but far, far more importantly it will help to bridge the gap between humans and other species, speaking as it does to the evolutionary continuum and demonstrating with sound scientific evidence that there are some extraordinary non-human cultures being played out in the natural world. . . . This very book can be considered itself an experiment in social transmission. The question is, will we get the message?”
-- Philippa Brakes, Whale and Dolphin Conservation, Huffington Post UK

“Humans, though arguably the masters of culture, are not the only species that has it. Dolphins, as the authors reveal, create signature whistles and can mimic and remember others’ even twenty years later. They can also learn tail-walking in captivity and then teach it in the wild. Whales possess dialects that change in a way that can only be explained as the result of learning. And both whales and dolphins behave in ‘obviously altruistic’ ways. Dolphins and whales have saved humans stranded at sea, and humpback whales have been observed saving seals from killer whales. . . . Whitehead and Rendell deeply analyze the importance of culture to evolution, exploring what can be learned from animals that are perhaps more advanced than humans before pushing ‘off to sea again, where there is still so much to learn.’”
, Publishers Weekly

“I’ve been anxiously waiting for The Cultural Lives of Whales and Dolphins to arrive and consumed it last night and early this morning. (It was far better than my coffee!) Of course, I look forward to rereading it many times for it is that good. . . . Scholarly yet easy to read, and incredibly well referenced. . . . The authors provide ample examples of nonhuman culture . . . and also discuss what we know about topics such as the moral lives of animals and others that are making people think twice about just whom other animals are and what we know about their fascinating and highly evolved cognitive and emotional lives. . . . The skeptics, if any still linger, will have to offer more than something like their dismissive claim, ‘Oh, whales and dolphins and other animals are only acting as if they have culture, but they don’t.’ They clearly do. . . . An outstanding book. . . . The Cultural Lives of Whales and Dolphins is destined to become a classic.”
-- Marc Bekoff, Psychology Today

“Whitehead and Rendell cover cetacean culture from its earliest beginnings to the present day. The authors include research they completed as well as some from other scientists to discover that cetaceans communicate by adapting to the unique environment in which they live, investigating the broad concepts of culture, community, and social learning before applying them to whales and dolphins. Also discussed are the implications of the creatures’ culture as it relates to ecosystems and conservation and the future of the cetacean world, including what it bodes for humans. . . . A captivating book for readers of all levels, from curious laypeople to scientists. . . .  Recommended for both undergraduate and graduate students; researchers; and scholars studying biology, zoology, and veterinary science; and anyone interested in learning about animal behavior.”
-- Tina Chan, SUNY Oswego, Library Journal

“This research round-up on cetacean culture opens with a description of one of nature’s great arias: the ‘high sweeping squeals, low swoops, barking, and ratchets’ of the humpback whale. That song, argue cetacean biologists Hal Whitehead and Luke Rendell, is the best evidence of culture in this intriguing family, because it is an indicator of social learning in action—communal singing evolves over time and changes radically over individuals’ lifetimes. Fascinating findings litter this sober treatise, from sperm whales snacking off fishing longlines to the ‘Star Wars vocalisation’ of dwarf minkes.”
-- Barbara Kiser, Nature

“Whitehead and Rendell suggest that for tens of millions of years—until the rise of modern humans—the most sophisticated cultures on Earth were those of whales. . . . If culture is as important to whales as it appears, then conservationists will need to protect not just their genetic diversity but their cultural diversity as well. All this speculation is underlain by a wealth of biological detail, all carefully annotated, making this book a valuable—and usually very readable—resource for anyone interested in cetacean behaviour.”
-- Bob Holmes, New Scientist

Hal Whitehead is a University Research Professor in the Department of Biology at Dalhousie University in Halifax, Nova Scotia.

Supported by the Marine Alliance for Science and Technology, Luke Rendell is a lecturer in biology at the Sea Mammal Research Unit and the Centre for Social Learning and Cognitive Evolution of the University of St Andrews, Scotland.
--This text refers to the paperback edition.

4.3 out of 5 stars
4.3 out of 5
35 customer ratings
How does Amazon calculate star ratings?
Amazon calculates a product’s star ratings based on a machine learned model instead of a raw data average. The model takes into account factors including the age of a rating, whether the ratings are from verified purchasers, and factors that establish reviewer trustworthiness.
Top reviews

Marryam
5.0 out of 5 stars Great Book
Reviewed in the United States on July 26, 2015
Verified Purchase
Everything you need to know about whales is here!
Read more
Helpful
Comment Report abuse

Flip Nicklin
5.0 out of 5 stars A "Must Read"
Reviewed in the United States on December 16, 2014
Verified Purchase
For anyone interested in Cetacean Culture tis is a must read. This is a meaty book that will be talked about, thought about and dreamed about for years to come. I cannot recommend it strongly enough.
Read more
5 people found this helpful
Helpful
Comment Report abuse
See all reviews from the United States

Foggygirl
4.0 out of 5 stars Very informative
Reviewed in Canada on June 6, 2017
Verified Purchase
A fascinating read. It makes you think about the other creatures that share the planet with us and their cultures.
Read more
Helpful
Sending feedback...
Thank you for your feedback.
Sorry, we failed to record your vote. Please try again
Report abuse

Eimutis
5.0 out of 5 stars Informative, Detailed, Academically annontated
Reviewed in Australia on December 27, 2018
Verified Purchase
Used for personal research in non-human communications. While definately an academic effort, the style made for very easy reading
Read more
Helpful
Sending feedback...
Thank you for your feedback.
Sorry, we failed to record your vote. Please try again
Report abuse

Mr. George R. Featherston
4.0 out of 5 stars Insight into a very intelligent life form
Reviewed in the United Kingdom on June 18, 2015
Verified Purchase
Bought for a sea-loving friend and it's very interesting
Read more
Helpful
Sending feedback...
Thank you for your feedback.
Sorry, we failed to record your vote. Please try again
Report abuse