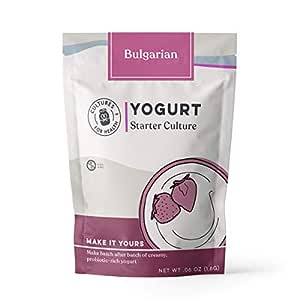 3.9 out of 5 stars
3.9 out of 5
520 global ratings
How are ratings calculated?
To calculate the overall star rating and percentage breakdown by star, we don’t use a simple average. Instead, our system considers things like how recent a review is and if the reviewer bought the item on Amazon. It also analyzes reviews to verify trustworthiness.

rachierach
5.0 out of 5 stars A brilliant tasting yoghurt starter!
Reviewed in the United States on December 13, 2017
Verified Purchase
So far I am very impressed with this. I just had to leave a review, because I was surprised it was only rated 3.5 stars, it’s amazing! FYI I was previously making yoghurt from store bought plain yoghurt, but whenever it came to using a few tablespoons of my homemade yoghurt from my previous batch, for the new batch, it failed! So I started looking at heirloom cultures; the whole point of homemade yoghurt to me was to continue using the previous yoghurt as a starter for as long as possible, so it’s much cheaper.
I use an instant pot 3qt to make yoghurt and have a candy thermometer to test the temp, and a milk straining bag to strain it, that’s literally it. So I put the milk into the pot, hit yoghurt so it displays “boil” and let it warm it up. When it beeps I check the temp of the yoghurt is 160F with my thermometer (make sure to whisk for hot/ cold spots) and it usually has hit 160F. If not, I press boil again, keep stirring slowly and wait for it to reach. I then take it out, place the instant pot pot in a bigger pot and put cold water around it, to cool it quickly. Or you can put the pot in the sink with cold water surrounding it. Once it’s cooled to 110F or just below to be safe, I add the starter yoghurt (2-2.5 tablespoons of my previous batch to around a half a gallon of milk, I use 2%). Give it a thorough stir, but it back in the instant pot and then hit “yoghurt” again, 8 hours on normal setting. Usually this finishes up about dinner time, I then leave it out for a couple of hours to cool a little. Then put it covered in the fridge. Next morning I strain it through an almond milk strainer for a couple of hours in the fridge, because I prefer thick Greek type yoghurt. Then I add a couple of packets of sweetener to make it a tad less tart, though I could eat it without sweetener for sure.
The first batch I made with this, when I was culturing the packet, was a lot more runny, it didn’t make anywhere near as much yoghurt because a lot was water which I strained away. But I just saved a little for the next batch and it worked perfect. I am now on the 4th batch and each is thickening more than the previous one, and quicker too. The first batch took 10 hours on normal yoghurt setting before it was thick enough, the following batches have taken 7-8 hours. Sorry for the long review, I figured the homemade yoghurt business can be tricky, and someone may find this useful! I know I read a lot of reviews here before making this purchase.
Read more

Amazon Customer
5.0 out of 5 stars Microbiologist tested, and approved
Reviewed in the United States on November 9, 2018
Verified Purchase
I had yogurt made with this culture while at a nice B&B on vacation and ordered some myself. I followed the instructions for the first batch (included with the purchase), then used the cook time and culture ratios and times from the B&B on the next batch. Turned out great. I strain mine to make it very thick and less tart. Just as good as what I had at the B&B.

As a microbiologist, I can appreciate the heirloom culture qualities. Love that I can just keep it going. My first batch set fairly well, but I did put some extra effort into it...like adding the initial culture powder to a teaspoon or two of milk first, making an even mix, then adding it to the rest of the milk. At 6 hours in (when it had not set yet at all, and only barely smelled like yogurt), I whisked the whole thing to re-distribute the bacteria, as I know after that long most lactic acid bacteria settle to the bottom. I wonder if this is why people with longer first culture times (mine took 11 hours to set) have issues, if it settles it will not perform as well for many reasons I will not detail. Hope this info is helpful for someone.
Read more
56 people found this helpful
Helpful
Comment Report abuse

Zanity 777
5.0 out of 5 stars Absolutely the best!
Reviewed in the United States on May 8, 2017
Verified Purchase
I purchased this so that I wouldn't have to keep buying starters for my yogurt every couple of batches. Unlike other reviews it set up beautifully the first time and the taste was so good plain that I had to stop myself before I emptied the little 6oz jar I was going to add to my smoothie! the taste reminded me of a good cottage cheese with a little tanginess, very, very good! I used whole milk and left it in the incubator for 12 hours, let it set for a few hours like the directions said then refrigerated it for 24 hours. It firmed up just fine and was creamy and delicious the first time. Both of my adult sons ate it plain too and said it was the best ever! I think my success lie in using whole milk and curing for 12 hours and letting it set; just follow the directions and it will turn out great for you too :-)

UPDATE: 5/17/17 The yogurt made from this starter does more to benefit me health wise than any store bought yogurt or any of the 2 or 3 use starters I have used in the past. Whatever strains are in this heirloom start are absolutely the most beneficial. If you are using yogurt for health be sure to choose this Bulgarian Yogurt Starter from Real Yogurt by Cultures for Health and you will be glad you did!
Read more
44 people found this helpful
Helpful
Comment Report abuse

A. RoachTop Contributor: Pets
VINE VOICE
5.0 out of 5 stars Great Mild Flavored Starter
Reviewed in the United States on January 5, 2017
Verified Purchase
I wanted to start making yogurt in my Instant Pot, and I didn't want to have to buy a new starter every time.
There was a bit of a learning curve, and I have to make a couple of batches before I got a good consistency to my yogurt. Once I got it down, it's super easy to make once a week. It's so much less expensive to make homemade yogurt than to buy it in the store.
Read more

Page 1 of 1 Start overPage 1 of 1
This shopping feature will continue to load items when the Enter key is pressed. In order to navigate out of this carousel please use your heading shortcut key to navigate to the next or previous heading.
Back
Next
Pages with related products. See and discover other items: non dairy milk, non dairy yogurt, yogurt dressing, yogurt starter, yogurt milk