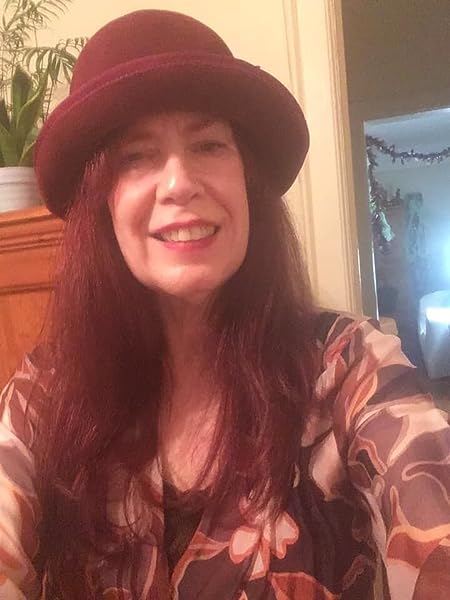 by Patricia Carragon (Author)
5.0 out of 5 stars 5 ratings
See all formats and editions
Sorry, there was a problem loading this page. Try again.

"It is a testament to her vivacious spirit that Patricia Carragon would think to personify cupcakes as a device to chronicle quotidian activities and as a mode to assuage the anxieties of her daily jaunts. Tasty diary entries mingle humor and contemplative musings in a way that not only tantalizes the tongue but stimulates all of the sensory receptors, as her imagery erupts from the page to entice one’s very soul." — Alison Ross, publisher and editor of "Clockwise Cat"
Read more
Previous page
Next page

Patricia Carragon is an executive editor for "Home Planet News Online." She hosts the Brooklyn-based Brownstone Poets reading series & open mic and is Editor in Chief of its annual anthology. Her poems and stories have appeared in over one hundred publications, most recently "The Avocet: A Journal of Nature Poetry," "Bear Creek Haiku," "Clockwise Cat," "First Literary Review-East," "Panoply," "poeticdiversity," and "The Yellow Chair Review," among other literary journals. She is the author of three collections of poetry, "Journey to the Center of My Mind" (Rogue Scholars Press, 2005), "Urban Haiku and More" (Fierce Grace Press, 2010), and "Innocence" (Finishing Line Press, 2017). "The Cupcake Chronicles" is her first book of fiction.

Brooklynite Patricia Carragon loves cupcakes, chocolate, cats, and haiku. She is an energetic and indefatigable writer of short stories, prose, and poetry. Angel Fire is her debut novel.

Ms. Carragon hosts the popular and long-running Brownstone Poets Reading Series in Brooklyn Heights, New York and is editor-in-chief of its annual anthology. She is an executive editor for Home Planet News Online. She is also an emerging photographer.

Ms. Carragon hosts the Brooklyn-based Brownstone Poets and is the editor-in-chief of its annual anthology. Since August 2005, Brownstone Poets still continues to be a safe haven for the written and spoken word. It is an open mic reading held usually on last Saturdays with guest readers.

Ephemerae, Vol. 1A, An International Journal of haikai, tanka, and beyond, edited by Shrikaanth Krishnamurthy, 2018

Like Light 25 years of Poetry and Prose by Bright Hill Poets and Writers, Edited by Bertha Rogers, Bright Hill Press, 2017

Retail Woes: Poetry From Both Sides of The Counter, edited by Nick Hale and Jullian Roath, Local Gems Press, 2013

Dinner With the Muse, The Anthology of the Green Pavilion Poetry Event, edited by Evie Ivy, Ra Rays Press, 2009

In 2006, Christine Leahy from the Park Slope Reader interviewed her. In 2008, she was interviewed by Louis Reyes Rivera on WBAI's Perspective on September 3 with Juanita Torrence-Thompson and Vivian Warfield. Patricia and several of her &quot;Brownstoners&quot; (Evie Ivy, Linda Lerner, Obsidian, Richard Fein and Peter Chelnik accompanied by saxiphonist Bob Feldman) were interviewed on Anne Cammon Fiero's Studio A Radio Series - WKCR 89.9 FM - Columbia University, which aired on December 13, 2009. Patricia was part of David Morneau's Love Songs CD in 2013, along with Austin Alexis, Iris Berman,Ana Bozicevic, Anne Fiero, George Held, Cindy Hochman, Roxanne Hoffman, Evie Ivy, and Susan Maurer. In 2013, she was one of the 3 muses in David Francis' indie flick, Village Folksinger https://www.youtube.com/watch?v=njU2DWEEu5I.

Since 2005, She hosts and curates the Brooklyn-based Brownstone Poets, formally the Park Slope Poetry Society, at the Park Plaza Restaurant in Brooklyn Heights and is the editor-in chief of the annual Brownstone Poets Anthology. She was one of the hosts for the SOS ABC NO RIO Sunday Open Series on the Lower East Side. She is proud resident of Bensonhurst, Brooklyn.

For Patricia, poetry allows the imagination to guide the hand in writing down the voice from within. Poetry is a safe flight into her darkest moments and other forbidden territories with her at the controls. By using words on paper, they become puppets. Through these puppets, she can express any deep-rooted fear or desire without submitting herself to embarrassing conversation. She prefers to get things down on paper as a catharsis for the soul. These emotions and ideas, whether they are dark or light are beautified and the afterimages that they produce are rewarding and up-lifting. Please share her experience and take a journey to where the intelligence of the heart can contemplate the complexities of the mind.

KarenN
5.0 out of 5 stars Original and Tasty
Reviewed in the United States on November 27, 2017
Verified Purchase
Original, tasty, and offbeat treat to read. I love it - and no calories!
Read more
Helpful
Report abuse

Amy B. Barone
5.0 out of 5 stars Sweet, powerful poems to devour
Reviewed in the United States on January 23, 2018
Entertaining and poignant, in The Cupcake Chronicles, cupcakes come alive in a mix of flavors and colors that the author uses to tell us stories of subway rides, bakery visits and dreams, as well as give us lessons in life that shine
Read more
Helpful
Report abuse

Kindle Customer
5.0 out of 5 stars Finger-Lickin' Good
Reviewed in the United States on November 2, 2017
This book is a fun read with serious undertones deliciously embedded in the icing.
Read more
Helpful
Report abuse
See all reviews
Back to top
Get to Know Us
Make Money with Us
Amazon Payment Products
Let Us Help You
EnglishChoose a language for shopping. United StatesChoose a country/region for shopping.
© 1996-2021, Amazon.com, Inc. or its affiliates