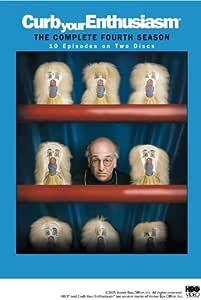 Larry David lives a charmed life-an understanding wife, famous friends, a supportive manager and an angelic singing voice so what's his problem? See Larry buy medical marijuana, take a hooker to a baseball game, steal a golf club from a corpse, ruin Ben Stiller's birthday part, attempt to cash in on his tenth anniversary present with Gina Gershon and trip the light fantastic in The Producers with Mel Brooks and David Schwimmer.

He never learns. In the fourth season of his award-winning HBO comedy series, the quasi-fictional character of Larry David continues to say--and do--whatever he wants whenever he wants. In the first episode alone ("Mel's Offer"), in which Mel Brooks offers him the role of Max Bialystock in The Producers, David offends a doctor, a lesbian couple, a wheelchair user, and Ben Stiller (by not shaking his hand after he sneezes). Then, in the second ("Ben's Birthday Party"), he offends a blind man--by telling him his girlfriend's not as hot as she claims--and pokes Stiller in the eye with a skewer while attempting to show agent Jeff Greene (Jeff Garlin) his new golf move.

Larry continues to offend Stiller until he drops out of The Producers and, in the fifth episode ("The 5 Wood"), David Schwimmer (Friends) steps in. The following episode ("The Car Pool Lane"), in which David attends a Dodgers game--with a prostitute, so he can use the carpool lane--made history when it set an innocent man free. Unused footage from the show, entered into evidence by the defense attorney, confirmed his client's alibi that he couldn't have committed a murder because he was at the game (alas, the Braves still trounced the Dodgers). Other guests include Ted Danson ("The Weatherman"), Russell Means ("Wandering Bear"), and Gina Gershon ("The Survivor") as a Hasidic hottie. In addition, the hour-long season finale ("Opening Night") boasts a bevy of stars, including Davids old colleague Jerry Seinfeld, Nathan Lane (Broadway's original Bialystock), and fellow Tony Award winner Anne Bancroft (The Miracle Worker). As they've done since the early days, Cheryl Hines (Cheryl David), Susie Essman (Susie Greene), and Richard Lewis and Wanda Sykes (as themselves) do what they can to keep one-man demolition derby David in check. --Kathleen C. Fennessy

4.8 out of 5 stars
4.8 out of 5
1,282 global ratings
How are ratings calculated?
To calculate the overall star rating and percentage breakdown by star, we don’t use a simple average. Instead, our system considers things like how recent a review is and if the reviewer bought the item on Amazon. It also analyzes reviews to verify trustworthiness.

dewzter
5.0 out of 5 stars Up there with the best!
Reviewed in the United States on October 7, 2015
Verified Purchase
Witty, sarcastic, obnoxious, unlucky, irritating, clumsy, cowardly, lousy social skills, narcissistic, these are just a few of Larry's character flaws, add them all together and we have a character we love to hate, or is it hate to love? Or is it pity, or do we see bits of self-reflection in Larry's failings and flawed personality? I'm not sure what it is but add them all together and the results are hilarious. Larry David is a comedic genius, I've never failed to get through an episode without laughing or actually feeling better about my own plight in life. To those who don't see the humor, you have my condolences, maybe it's that "self-reflection" thing I mentioned which is why you find this show so offensive and humorless. Just saying.
Read more
5 people found this helpful
Helpful
Comment Report abuse

Crescentfallen
5.0 out of 5 stars Like Seinfeld but unrated
Reviewed in the United States on January 2, 2017
Verified Purchase
Like Seinfeld but unrated. Just looking at LD is amusing, his posture, bald with side afro. He's a nice guy but always seem to say the dumbest things at the wrong time. How can you make this stuff up. 2 Jews dragging a guy named Jesus on the floor with a wooden T(cross) lol. LD is as funny as Mel Brooks. Love this show.
Read more
2 people found this helpful
Helpful
Comment Report abuse

conditionals
5.0 out of 5 stars Kicks other shows to the... curb?
Reviewed in the United States on October 23, 2005
Verified Purchase
Whatever you do, don't believe the unhype for this season. I was reading the reviews on here and looking at the lame DVD cover photo this season and almost dreading having to watch my idol go down the drain.

Luckily I was a fool for taking note of the reviews contained here. It's true that the first four episodes rely on self-parody, with the jokes never really coming into their promised fruition. But halfway through it picks up, offering some of the funniest moments of the show (particularly in the Car Pool Lane). I found the story arc to be the best yet, though I will say that they are beginning to rely on continuity too much; many jokes span two episodes. Still, who can complain about strong series continuity?

Despite his self parody in the first eps, Larry is on top form for most of the season, managing to make all the crazy happenings seem somewhat believable. He even pulls off the Producers with style. Ben Stiller is fun to see on screen for maybe 5 minutes, but becomes grating to watch after a while. Fortunately, By halfway through the season, Ben is out and David Schwimmer is in, pulling off hating Larry better than possibly anyone else in the series' history. The levels of hate he brings, wow. As for the rest of the cast regulars... they actually seem a bit subdued this year (Jeff had a stroke at the end of season 3 so I can understand that, but the taming of his wife's temper doesn't really make sense). Not much Lewis here, but the addition of Larry's dad pays off.

Definitely one of the better seasons (I personally think 1 is the best and 3 is the worst)... let's just hope season 5 comes out on DVD in the next few years.
Read more
8 people found this helpful
Helpful
Comment Report abuse

Queenie
5.0 out of 5 stars Irreverent comedy.
Reviewed in the United States on February 28, 2016
Verified Purchase
Initially I had some trouble with the profanity. That being said, the show is different and very funny. It's not scripted in the true sense. Detailed outlines are provided and the actors actually ad lib the dialog giving the show a real feeling. I just discovered this show recently on Amazon Prime. Larry David is perfect in his role as a real jerk. I love the woman who plays his wife. She is perfect.
Read more
One person found this helpful
Helpful
Comment Report abuse

Sargentrock
5.0 out of 5 stars The Producers!
Reviewed in the United States on October 8, 2015
Verified Purchase
I have a soft spot for this season as the main season-long story line going through it is all about The Producers on Broadway. It's a lot of fun, and this season has some early appearances of people that are very recognizable today. Very funny and rude as always, you either like Larry David or you don't. If you don't then you probably shouldn't watch, as he's especially grating over this season. If you do it's as funny as ever.
Read more
One person found this helpful
Helpful
Comment Report abuse

millie kennedy
5.0 out of 5 stars A Show full of Talent = A Laugh a Minute !!
Reviewed in the United States on March 30, 2016
Verified Purchase
Larry David is Hilarious! I enjoy him so much..He makes me laugh out loud
all the time...The casting is excellent and the way he gets into and out of his
messes is such a talent of it's own..I've watched it several times over.. I like
to watch it before bedtime so that it removes all the drama that's going on in
the world today. Great Show....
Read more
Helpful
Comment Report abuse

CAS MARINO
4.0 out of 5 stars "Curb" is a Quirky Gem
Reviewed in the United States on November 12, 2012
Verified Purchase
You have about two episodes to fall in love or become repulsed. There is no gray area with this show's characters and premise.

The writing and acting are just about flawless as comedies go, and the cast is nothing short of brilliant.

Or, it's an exercise in ego and as overbearingly soulless as "Seinfeld" (which was written by this series' star and creator, Larry David), and the characters should be taken out in the rain and shot for their lack of humanity and interest in anyone's satisfaction but their own.

Uriel
5.0 out of 5 stars Good show
Reviewed in the United States on June 24, 2016
Verified Purchase
I love this series. It is funny to me the ridiculous situations he finds himself in. It's probably not a comedy everyone would find laughable because he is at times insensitive to others but he is real. He says what he thinks he has no filter. I had to skip a few episodes but I crack up a lot. My favorite episode is the carpool episode.
Read more
Helpful
Comment Report abuse
See all reviews

Jimi Z
4.0 out of 5 stars Larry the putz
Reviewed in Canada on October 7, 2009
Verified Purchase
Well,,here"s another season of mr David being his irritating and semiparanoid self. This time we see Ben Stiller in a few episodes and Larry manages to screw up with his usual paranoia playing part to his situations. This one seems to get to be a bit too hard to believe at times, Especially when Mel Brooks who is constantly swooning over Larry while casting him the Producers? Really hard to believe that one. Those parts wern't funny at all, but theres enough in this season to keep you watching and laughing at the characters, especially his agents wife.(I have met a few hundred of her types in real life). Her character is allowed to open her mouth more in this series and berate Larry when needed. Also when Larry wants to join a new golf club which is a one of your typical right wing nut-bar courses where your political affiliations and the character evaluations during the interview either make or break your application. Hang in ther Larry and keep the silliness coming.
Read more
2 people found this helpful
Report abuse

Cathy
5.0 out of 5 stars CYE Seasons
Reviewed in Canada on January 31, 2014
Verified Purchase
My husband loves this show. Where the big box stores charge 35 plus tx per season. I purchased seasons 4,5,6,7, & 8 for less than half that price. It was an amazing deal! I had to wait a little bit for shipping but not that long considering it was free!
Read more
Report abuse

Page 1 of 1 Start overPage 1 of 1
Previous page
Next page
Pages with related products. See and discover other items: mel brooks