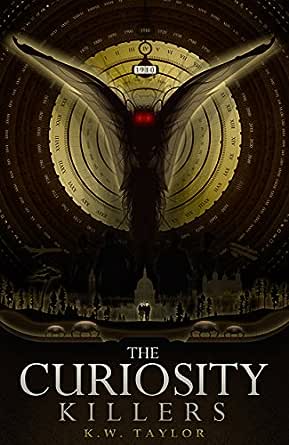 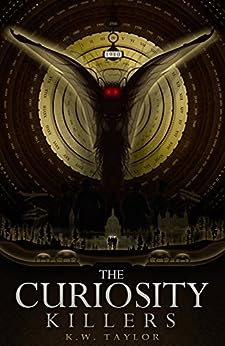 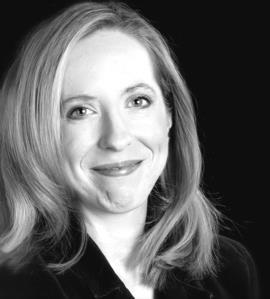 "Taylor's first foray into science-fiction borrows from her urban fantasy and horror
background for a unique spin on the time travel novel. The Curiosity Killers
is an exciting adventure set in a beautifully detailed alternate United States with
enough serial killers, monsters, and mystery to keep readers on their toes."
--J.L. Gribble, author of the Steel Empire series

"Wholly original and a hell of a lot of fun!" --Tim Waggoner, author of the
Nekropolis series

"From the moment you read that first paragraph, K.W. Taylor zaps you through
time and space and alternate history at a thriller pace with some of the most engaging
traveling companions anyone could ask for."
--Heidi Ruby Miller, award-winning author of the Ambasadora series --This text refers to the paperback edition.

K.W. Taylor is the author of the urban fantasy Sam Brody series, about a dragonslaying disc jockey (The Red Eye and The House on Concordia Drive, both 2014 from Alliteration Ink). She has an MFA from Seton Hill University. Taylor lives in a restored Victorian home in Ohio with her tech writer husband and--unlike every other novelist in the world--an insanely photogenic kitten. She teaches college English and Women's Studies and blogs at kwtaylorwriter.com. The Curiosity Killers is her first science fiction novel. --This text refers to the paperback edition.

Taylor's ability to travel back and forth through time without creating a paradox or losing the thread is impressive. Her combination of sci-fi, steampunk, and horror is also thoroughly enjoyable. There is also a diverse cast of characters here, and one of the things I enjoyed is that their diversity isn't The Thing about them. There is an Indian protagonist & a lesbian main character, plus two gay characters and I believe other people of color- but none of these are the main points. Diversity in fiction is important to me (and clearly to Taylor) and so I was glad to see all of this.

The main plot is deft and engaging. The world of the future imagined by Taylor is all too realistic- an America divided by ideaology (particularly as it has to do with race) after a second Civil War. With what's happening in American politics right now, it's VERY EASY to imagine this happening, in a way similar to how easy it is to now imagine Margaret Atwood's world in The Handmaid's Tale coming to reality. Additionally, the real life historical mysteries that Taylor sprinkles throughout the story (used to ground at least some of it in some reality) are interesting ad easily relateable- after all, how many people would love to solve these mysteries?? Tons!

And, as is always true for Taylor, the dialogue is top notch, engaging, and swift. Her envisioning of Wilbur Wright is one of my favorite things.

Carrie G.
5.0 out of 5 stars A delightfully wild read
Reviewed in the United States on November 17, 2016
Verified Purchase
Delightfully wild! This book has everything I didn’t know I wanted in a sci-fi—time travel, an alternate future, serial killers, unsolved mysteries of the past, the noble pursuit of knowledge for its own sake, and a cat named Bodhi. The quick pace and ever-deepening mysteries keep the reader interested, but it’s the characters that ground the story. I appreciate that Benoy Jonson isn’t your typical genre protagonist. He’s intellectual to the point that he’d rather hear about adventures than go on them, and it’s a fun ride to watch him come into his own as a hero. The rest of the cast is rounded out by quirky, loveable characters ranging from enthusiastic, out-of-his-time engineer Wilbur Wright to the Mothman. All in all, The Curiosity Killers is a pleasure of a read!
Read more
One person found this helpful
Helpful
Comment Report abuse

Joseph Bouthiette Jr.
5.0 out of 5 stars Soft steampunk with fun galore
Reviewed in the United States on June 22, 2016
About halfway through this novel, I realized I was going to review this book by comparing it to a good Godzilla movie. And that might seem strange, considering the aesthetic of the novel*, but to me, this story has its own Godzilla in the form of time travel: Taylor introduces it early, uses it often, and most importantly, uses it in a meaningful and fun way. You go to see a Godzilla movie for the giant monster action; you read THE CURIOSITY KILLERS for awesome time travel action.

Spoilers ahead: as another reviewer noted, this book crams so many creative ideas into one space that it should be a mess, but it absolutely isn't. A steampunk alternative future? Cliche, but Taylor gives it a meaningful existence with the fallout of a civil war putting a stranglehold on technology. The use of historical entities as characters? I can't tell you how many books I've skipped out on because the plot was "Something bad happens, and we need TELSA to help figure it out!" Of course, in a time travel story, it makes sense to use past events to ground the plot in "reality," and the use of a villain who actually IS past murderers (Jack the Ripper, Cleveland Torso Murderer, Black Dahlia Murderer...) was a great concept. There's even a mothman on the cover, and that just seems like icing on the cake of "What even is this book trying to be?" but trust me that the mothman's inclusion is clever by being relatively minor but hugely significant. The cast of characters are very inclusive, featuring a lesbian bachelorette, a gay couple, and an Indian playboy. That might just sound like an attempt to score on a PC bingo card, but each character is more than just that dimension.

Speaking of the characters, seeing their interactions is so much fun that, frankly, I didn't necessarily care what the actual *plot* of the book was about until about two thirds of the way through. When it becomes obvious (stop the crazy time-travelling murderer who, hey, also happened to start the second American civil war) it then becomes a fun exercise in remembering how the different events led to this scenario that allowed the villain to exist in the first place. The plot isn't so convoluted as to require a degree to analyze, but I'll definitely be rewarded from a second reading. And a second reading it shall get, and a third, and a fourth...

In conclusion, an excellent story that is soft on the science and big on the fun. Highly recommended.

(*If you're looking for actual giant monster fun, immediately pick up a copy of Matt Betts' ODD MEN OUT, another brilliant scifi novel from the same publisher as THE CURIOSITY KILLERS.)
Read more
Helpful
Comment Report abuse
See all reviews from the United States