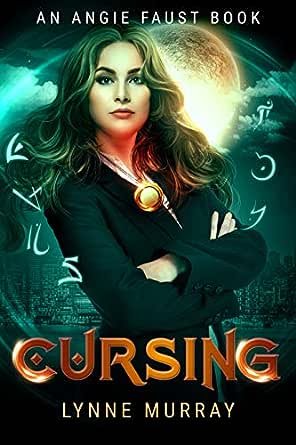 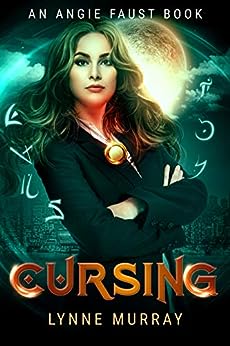 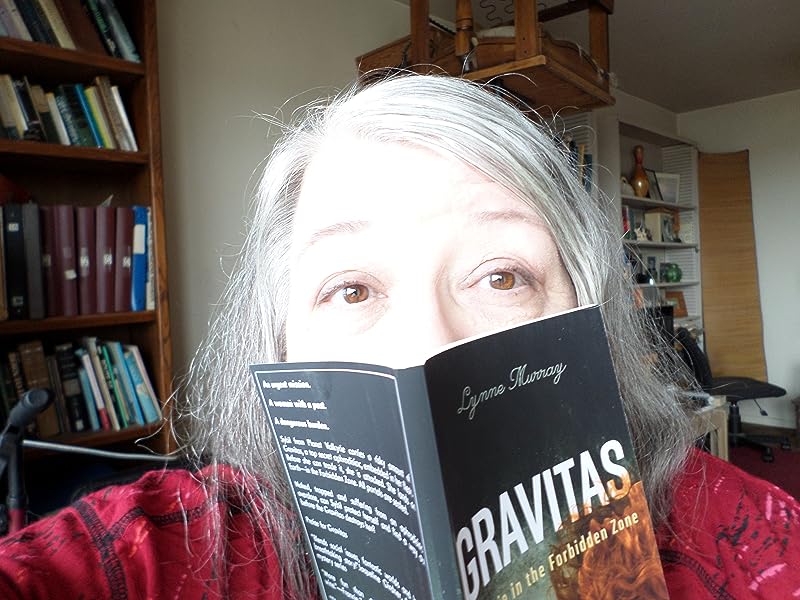 J. Girdner
5.0 out of 5 stars Cursing by Lynne Murray is a must read that has it all!
Reviewed in the United States on April 24, 2019
Verified Purchase
Cursing: Book 1 of the Angie Faust Series is a great adventure that pulls you like an alien death ray to the end of the book. It has it all: aliens (lots of different kinds of aliens), action, suspense, a main character you root for, a touch of romance, and a great dollop of humor. Murray’s special power is creating terrific worlds and bringing them to life with expressive writing you can’t put down. Please tell me there’s another one coming!
Read more
Helpful
Comment Report abuse

Emily Pennington
TOP 500 REVIEWER
5.0 out of 5 stars Realigning Reality
Reviewed in the United States on July 1, 2019
From the first page, this book promises a wild ride into the unexpected! Angie Faust has been told by her aunt, from the time she could remember, that it was very important to keep her anger under control and to hide the odd ability she had. They likewise moved quite a bit. So when she is in a staff meeting with her nasty Office Manager boss, Carroll Caine, a former Navy Warrant Officer who doesn’t like her and enjoys yelling at her, spitting in her face in rage, she is not surprised to feel a familiar force come from her and enter his chest, grabbing and squeezing his heart. CPR wouldn’t bring him back, she knew, and the natural assumption was that he died from a heart attack. They couldn’t accuse Angie since she never moved toward him and hadn’t touched him.

As her co-workers try to revive Caine, Angie sees a gorgeous man staring at her and he nods in acknowledgment. When she heads off for the elevator, the man follows, introduces himself as Chad, and asks her to meet him after work for coffee. At the “Magic Pastry and Coffee” Angie meets Sophie and is invited meet others with specialized abilities and to join the Extraterrestrial Protective Agency who can help her with the power she can’t control. She is introduced to a whole new world, and even learns more about family members who sort of disappeared. She also learns about the danger she may encounter because of her abilities. Not everyone she comes across is a “good guy” and her powers attract plenty of attention from both the good and bad sort.

Angie’s new environment brings a crazy bunch of creatures, some alien, some magical, some monster-like. It’s a real eye-opener to find what else is living here and looks like a fun series to get into! Grab your copy and prepare for an adventure like none before – well, maybe sort of like MIB but more strange!

Cats Luv Coffee
4.0 out of 5 stars Reviewed for Cats Luv Coffee Book Reviews - 4 Paws Up!
Reviewed in the United States on May 26, 2019
I wasn't sure that I would enjoy Cursing. Let's be honest — that blurb is all over the place. Killing her boss? Telepathic powers? Aliens!!? Sounds like the weirdest mash-up of urban fantasy and sci-fi, but hey, Men in Black was pretty entertaining and I love Ilona Andrew's Innkeeper series so why not?

Cursing didn't disappoint! What starts out as a typical UF fare quickly morphed into something that Agent J would find completely normal.

Angie Faust has been trying to keep her anger under control since an early age. She doesn't remember anything before her parents died in an automobile accident. All she knows is that her aunt always made it very clear that she needed to control her anger and that they keep her strength hidden to protect themselves.

"I sensed the familiar but unknown force piercing him like a tool. It reached for his heart and grabbed it. And squeezed."
After accidentally killing her boss, she finds herself on the radar of some very dangerous groups and considering an offer to join the ETPA — Extraterrestrial Protective Agency. Meeting the ETPA opens Angie's eyes to a world she had no idea existed. From her own abilities to new otherworldly technology, to the different alien species making themselves at home on Earth thanks to varies treaties.

Lynne Murray not only creates a strange and wonderful world enveloping our own, she does it with flair. The various alien species presented were one of my favorite things about this novel. The Spider-Woman from the Arachnid plant innocuously called "Grandmother" was inventive and I loved the tie in to our own various cultural mythologies, giving a history to alien sightings.

There was so much going on in Cursing, but it never felt contradictory. The characters were all a joy to read and there was no shortage of action to further the plot. I had never read anything from Lynne Murray before but she will definitely be on my TBR in the future. I can't wait for the next book in the Angie Faust series.
Read more
Helpful
Comment Report abuse

IvaGh
5.0 out of 5 stars Cursing, Urban Fantasy at its Magical Best
Reviewed in the United States on April 26, 2019
It is no surprise that Lynne Murray sets her fantasy in San Francisco, her city and her love for many years. What I love about Cursing is that there are hidden shocks, surprises and treasures lurking under or in nondescript houses, but even more in the sky and other dimensions that are and are not San Francisco. A night turns into a terror and a wonder when a large eye peeps from the sky, and extraterrestrials lurk in portals and folded space.

Angie Faust, who has been trying to hide her magical, dangerous power for most of her youth, starts to make more unsettling discoveries when she "thinks" her unjust boss to death. She then finds that humans are not the only ones inhabiting the city, and that there are those who wish to cultivate her powers, for good and for evil. A society for Extraterrestrial Protection provides her with knowledge and training, and she discovers the answers to mysteries about her disappeared aunt and other relatives. She also discovers Wade, with whom she falls in love.

Yet the most dangerous battle lies ahead, and on her own doorstep. Will Angie be able to summon the strength to overcome her most insidious enemy?