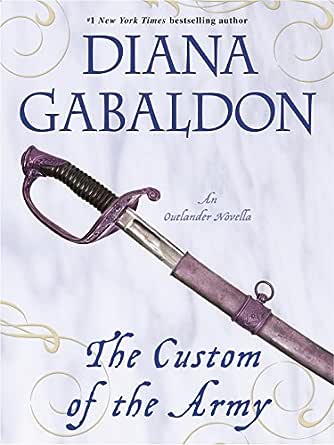 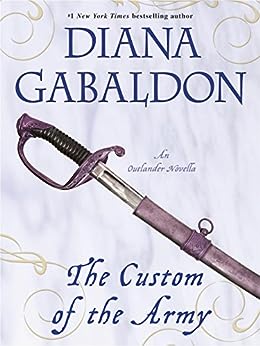 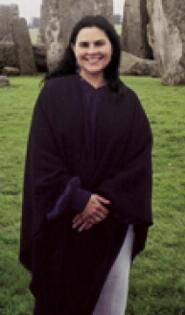 Diana Gabaldon is the beloved author of seven New York Times bestselling novels in the series that began with Outlander, including Dragonfly in Amber, Voyager, Drums of Autumn, The Fiery Cross, A Breath of Snow and Ashes, and An Echo in the Bone. In 1997 she received the RT Award for Innovative Historical Romance.

4.6 out of 5 stars
4.6 out of 5
599 global ratings
How are ratings calculated?
To calculate the overall star rating and percentage breakdown by star, we don’t use a simple average. Instead, our system considers things like how recent a review is and if the reviewer bought the item on Amazon. It also analyzes reviews to verify trustworthiness.
Top reviews

Tamela Mccann
4.0 out of 5 stars Lord John's Custom
Reviewed in the United States on June 24, 2015
Verified Purchase
I'm a Lord John fan. I admit it and embrace it. So I was thrilled to find this novella about his adventures into the Canadian wilderness to stand up for his friend (but also to get out of England for a bit following a duel that went awry). It was nearly the perfect length for a recent flight, and took me right into the Outlander universe as well.

I won't waste time recounting the entire plot, other than to say Lord John finds it expedient to get out of town and when he's asked to stand up for his friend, he takes it. Once he's made it to Canada, however, he finds his cousin's husband has disappeared...after creating his own second family with a Native American woman. Lord John is nothing if not a beacon of integrity, and he does his best to set things right in this regard, and ends up taking part in a British raid on a French fort (which also involves Simon Fraser). If you are looking for a happy, upbeat slice of Lord John's life, this isn't it, but it is gritty and real.

There's a lot packed into the novella, and while it doesn't really illuminate more of the overall story, it's an excellent glimpse into what Lord John stands for and it strengthens the backstory of his life in general. I love how Gabaldon has given us a hero, although one with many secrets, who stays true to himself as best he can in any circumstance in which he finds himself. This novella will keep you engrossed with its wry humor and believable twists. Recommended.

Nancy
5.0 out of 5 stars Prequel to “the Scottish Prisoner”
Reviewed in the United States on September 24, 2020
Verified Purchase
This is the prequel to “the Scottish Prisoner” and helps fill in the missing pieces of how Lord John Grey (LJG) ended up in Canada where he gets the documents accusing Siverly of misconduct that starts LJG’s investigation in the beginning of “The Scottish Prisoner”. A quick, sometimes funny read that is over much too quickly which is my only complaint besides a price of $3.99 for 114 pages. LJG is my favorite Outlander character so always glad to find out more about him a gay British officer in the 18th century with close ties to his brother and his brother’s family. An endearing combination of smart, brave, honorable with a dry wit.
Read more
Helpful
Comment Report abuse

ILuvGoldDogs
3.0 out of 5 stars Not really into this series and here's why.....
Reviewed in the United States on July 18, 2016
Verified Purchase
I read the Lord John Grey series while waiting for Book 9 of the Outlander series to be written and released. The writing of the LJG books is good, but I'm really not into this series too much. Much less character development, not really into the characters, not really into the military theme, they don't tell me the things I want to know about LJG which makes them fall short of the expectations I had when I purchased them.

Maybe I was spoiled by the ~early~ Outlander Novellas which seemed to 'fill in the blanks', so to speak, on characters related to the Outlander series--the secrets about Roger's parents, Comte St. Germaine, Geillis Duncan, Ian and Jenny's son, Loaghaire's daughter, Joan. The early novellas left me wanting to know more about these characters. This series...not so much. I just wanted them to end.
Read more
3 people found this helpful
Helpful
Comment Report abuse

Tbascoebuzz
5.0 out of 5 stars A short span in the intriguing life of Lord John Grey
Reviewed in the United States on December 1, 2012
Verified Purchase
...gawd I adore Diana Gabaldon. She just never fails to deliver! I've read all of her Novels/Novella's and all I can say is her writings always propel me to another time...they surround, engulf and envelop me.

This story had me laughing out loud at the beginning. I'm not sure if this is Ms. G's intention, but it was so humorous to me to envision these party-goer's purposely electrocuting themselves with an EEL! So I'm sittin' here reading this with a huge, stupid grin...crackin' up... Ms. "G" describes John Grey's experience with the eel so precise and exact and even though it was a serious moment, it had me in stitches. I could feel what these people were experiencing being voluntarily shocked off their feet by an eel! Hilarious....Ms. G is just that good.

Lord John Grey is a patient man who does not act impulsively. He's been a Soldier (Lieutenant Colonel) in the British Army all of his adult life. He thinks before acting and does not panic easily (if at all). Above all else, he is honorable and noble to a fault. This story lends more insight to the person of Lord John Grey and a small portion of his life experiences. This story takes place in 1759, as Lord John travels to give witness to the character of a friend in Canada who is facing court martial for failing to suppress a mutiny.

I love John Grey's character and I must confess, this emotion surprises me as I didn't like him much at first (his introduction in the "Outlander" Series...but he's weaseled his way forever into my heart). He's a good man...always consistent, always follows the rules..(.well, almost always..heheh..), while keeping his homosexuality lifestyle hidden and protected. He sacrifices so much of himself for his family and close friends.

Always in Lord Johns life does he face seemingly insurmountable challenges and usually those challenges include life (and career) threatening dangers. He's always forced to analyze, consider and weigh those dangers against traveling a road less dangerous (but usually is forced into the most dangerous path), in order to achieve his mission...whatever it may be.. This story takes the reader into another thread of John Grey's life...the Battle of Quebec and more.

Because there's very little dialogue in this story and a LOT of descriptive detailed foundation, it has the potential of becoming tedious to the reader who has never read D.G before. But press on and you won't be disappointed. I never expected John Grey's character to become so interestingly fascinating to me. He's taken me by surprise.
Read more
4 people found this helpful
Helpful
Comment Report abuse

AlaskaAndy
5.0 out of 5 stars Diana Gabaldon never disappoints
Reviewed in the United States on July 1, 2019
Verified Purchase
I love all Diana’s Outlander books, and have fallen in love with Lord John Grey, as well. Diana writes with great detail, making you feel like you can see, smell, taste and hear what the characters are experiencing. She draws you into the characters’ lives, and you see things from their perspective. I can’t get enough of her writing style.
Read more
One person found this helpful
Helpful
Comment Report abuse
See all reviews

Natasha
4.0 out of 5 stars Another Gabaldon hit!
Reviewed in Canada on March 22, 2016
Verified Purchase
Another great Gabaldon novella - I just can't get enough of Lord John and the world of Jamie and Claire. The only reason I didn't give it 4 stars is because I found it ended a little abruptly for my tastes. Based on the other novellas I've read that may just be a sympton of the genre rather than the author's writing itself.
Read more
Report abuse

Darlene Fleury
4.0 out of 5 stars Love lord John
Reviewed in Canada on April 8, 2013
Verified Purchase
I have read everything Diana has written I believe, but I am still waiting for the next Outlander. Jamie and Clair have found a place in my heart like they are family and would love to know more about them and their families. Lord John to me is such a lovely person that is typical of "All of the good men are married or gay" At my age anyway...
Read more
Report abuse

Kindle Customer
5.0 out of 5 stars Gabaldon novel set in Quebec
Reviewed in Canada on November 5, 2018
Verified Purchase
I was surprised to discover that Gabaldon set one of her novellas in Quebec. An interesting angle on a historic event that served to shape history in North America.
Read more
Report abuse