You've subscribed to Karnie Cleaver Mysteries! We will preorder your items within 24 hours of when they become available. When new books are released, we'll charge your default payment method for the lowest price available during the pre-order period.
Update your device or payment method, cancel individual pre-orders or your subscription at
Your Memberships & Subscriptions
There was an error. We were unable to process your subscription due to an error. Please refresh and try again. 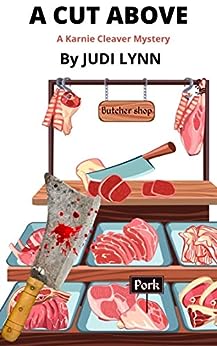 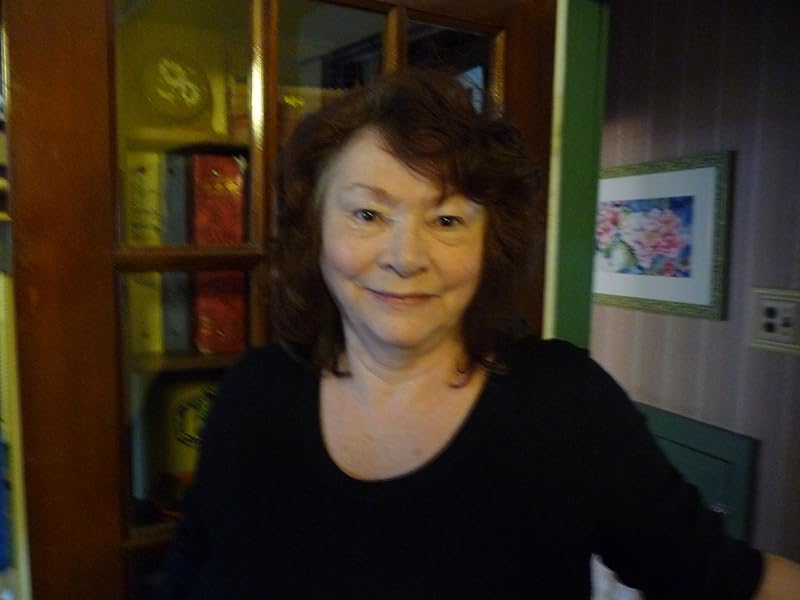 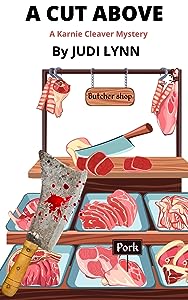 Mae Clair
5.0 out of 5 stars A wonderful new cozy series to follow!
Reviewed in the United States on May 18, 2021
Verified Purchase
I enjoyed this novel introducing the Karnie Cleaver mysteries by author Judi Lynn. She has a deft pen with cozies, as proven by her Jazzie Zanders series. Lynn scores again with Karnie and her family who own the A Cut Above butcher shop. Once again, Lynn populates her tale with plenty of interesting characters. Aside from Karnie and her family, the reader gets to know several of the customers (regulars) who visit the butcher shop. I love Mrs. Sprunger! Then there’s Matt, the owner of a nearby farm, who is divorced with two small children. It’s clear from the start Matt is set on turning Karnie’s head, but she’s not so easily convinced. As he tells her, she’s “prickly.”

She knows what she wants. She’s happy living alone, working the counter at the butcher shop and producing a video cooking show with tips on how to prepare various dishes using the meats her family sells. Her following is so popular the owner of a new, rival butcher shop tries to lure her away with a chunky salary. Not long after Karnie turns her down, Donna Amick ends up dead, a meat cleaver in the back of her head. Karnie is not a suspect but that doesn’t stop her from trying to discover who is responsible, especially given the woman’s body was dumped behind A Cut Above.

The sleuthing alternates with plenty of family scenes and an evolving relationship between Matt and Karnie. I love his kids, and their dog, Jolly. Isn’t that a great name for a dog?

On the murder end, there are several suspects with motive, plus a second murder to contend with. Then somebody attempts to break into Karnie’s house, and the stakes get higher. The murderer is revealed in a tense and suspenseful moment (some nail biting on my part), and the ending provides a perfect wrap while setting up the characters for more adventure. I for one will be following this delightful series. And as a bonus, the author includes several recipes at the back of the novel. A winner all the way around!
Read more
One person found this helpful
Helpful
Report abuse

Mare
3.0 out of 5 stars Usually
Reviewed in the United States on June 10, 2021
Verified Purchase
Really love "The Body" books by Judi Lynn but found this book harder to follow. Will probably give the next book in the series a chance but will see when it comes out. Was not thrilled.
Read more
Helpful
Report abuse

Marianne Collier
5.0 out of 5 stars Great story. Love the new characters in this new series. It kept my interest and I love books about families and their interaction with one and another. This Author is one of my favorites
Reviewed in the United States on May 4, 2021
Verified Purchase
Judi Lynn has written several series and this one looks to be as much fun to read as her other ones
Read more
Helpful
Report abuse

Frances HamptonTop Contributor: Cooking
4.0 out of 5 stars I Love This New Series!
Reviewed in the United States on May 19, 2021
Judi Lynn is a still new to me author. I read one of her Jazzi Zanders mysteries before reading this one.
This book is the start of a new series. It is set in a butcher’s shop that the main character’s family own. Karnie, (I thought it was clever to name her Karnie which sounds like the Spanish word for meat, carne), also works there and coordinates a cooking show she does with weekly specials. One thing I have noticed with both books is that the author knows the occupations she gives her main characters. Jazzi does home renovations. Both times the author wrote accurately and detailed about what the main character was doing. This is something I find very interesting, especially since working takes up a big part of most people’s day. I have enjoyed hearing about the work they do.
Karnie’s work brings in to the book a lot of characters and the author takes the time for you to get to know them. I love some of the bit players in the book. I’m already looking forward to reading more about them in future books. I also enjoy how people are connected in the small community where Karnie lives and works. I felt at home there.
The mystery begins when the owner of a new butcher shop in town is found dead at the family’s butcher shop’s backdoor! This brings in Detective Carmichael. He seemed nice and interested in Karnie, keeping her family in the loop about the investigation. When it appears that Karnie may be in danger, Matt steps in to help keep her safe. Who is Matt? A customer and a long time friend of her brother Chuck, (there is a theme with the names as you will see with a third brother). Matt is divorced and has custody of his two young children. He also has a dog, Jolly. I love books where animals play a role in things. I also love that the author is showing that fathers can and do step up for their children. So often it is a deadbeat dad, (I’m talking about books in general with this issue). I know several fathers who are custodial parents and they have all the same issues to work out that women do. It’s refreshing to see it portrayed in a positive way. The author also portrayed another social issue in a natural and positive way in the book. I loved that she put it in there and moved on because she treated it the way it should be in real life. This is what it is, acceptance, get on with life. If you have read my reviews you know I don’t go into the mystery. I feel strongly that it is for you to discover what the clues are and who the suspects are.
It is slow paced though there is a lot going on. I enjoyed it as much as I do my fast paced books. There are a couple of editing issues but they in no way detracted from my enjoyment. They were spacing issues in two areas. I mention it only because they are noticeable and I am hoping the author sees it so she can fix the Kindle version. I haven’t read a print version so it is very possible this is only a Kindle issue. Please don’t let it stop you from reading this enjoyable book. Reading it, you can tell that the author puts a lot of work into her books. I hope you read it and enjoy it as much as I did.
I almost forgot! *face palm* At the end of the book, the author has included a few of the recipes that Karnie makes on her cooking show or prints on recipe cards for customers. I made the hamburger soup one and it was tasty. I am planning on making three more this week and will probably use her leftover suggestions. Yes, they sound that easy and delicious. You might want to make a recipe and have it warming in a slow cooker while you read. I wish I had done that.
Read more
One person found this helpful
Helpful
Report abuse
See all reviews