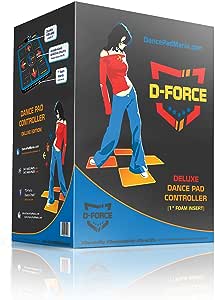 The Deluxe Dance Pad is an improvement over our standard dance pad in 2 ways:

1. 1″ super high density foam inserts which inflate the pad to a more arcade-like platform. This ensures that the pad remains firmly grounded. The result is greater comfort to the player, the ability to advance to higher levels, and ultimately the ability to achieve higher scores.

2. Raised, reinforced buttons act as a sensory aid, enabling the player to gauge his/her exact position on the dance pad at all times.

The D-Force Deluxe Dance Pad also features super-sensitive, no delay technology, and is constructed of smooth material which allows fluid transitions from step to step.

3.9 out of 5 stars
3.9 out of 5
110 global ratings
How are ratings calculated?
To calculate the overall star rating and percentage breakdown by star, we don’t use a simple average. Instead, our system considers things like how recent a review is and if the reviewer bought the item on Amazon. It also analyzes reviews to verify trustworthiness.

Andrew C.
5.0 out of 5 stars Great with major flaw; Final decision pending
Reviewed in the United States on February 21, 2017
Color: Dance+PumpVerified Purchase
The pad is very good, sort of reminiscent of the RedOctane Ignition 2.0 I had back in the day.

My big complaint, though, is that I've only been using this for 2 or 3 days now, and I've already got an issue. Under the arrows, it felt like there was an extra slight bit of padding in the top piece of the pad, sort of to give the buttons a "raised" feel. Well, on day 3, these things have already shifted away from their buttons. And since it's inside the top piece of the pad that has the actual circuitry, you can't just go shift them back into place. Kind of hard to explain, so I've attached crude drawing of what I'm talking about. Assume the red pieces are little embedded pieces of padding that originally started directly under each arrow.

At first I thought it was designed that way, like for extra sensitivity because I've noticed in videos that heavier players today are keen on pressing only the extreme inner edges of arrows. But no, I've felt and watched them move as the days pass, and there's no uniformity to them on any axis.

It's problematic because it throws off my bearings. I've already almost rolled my ankle because in the middle of a 500-step song, the bumps made me get misaligned and take a step off the left edge of the pad.

If all of this happened within the first week, that cannot bode well for the rest of the pad's life. :/

EDIT: The padding I criticized in my review has now become a mountain in the middle of the pad with the far edges protruding into the inner side of each arrow. Bearings are being thrown off even worse now because of it. This pad didn't even last a whole month for me!

EDIT2: After months of "dealing with it", other buyers have stated that the manufacturer is aware of these issues, and have new batches available that should improve the design. I'm currently starting a warranty replacement process, so we'll see how it goes. Hopefully it lasts more than a few days and can get 5/5 it deserves instead of the 3/5 it got. :)

EDIT3: Replacement pad came in today; Kudos to DPM, the turnaround time was insanely fast and it was hassle-free. Played a medium-heavy-ish sessions today and the inserts are holding up so far. So hopefully they will continue to do so in the coming weeks.

EDIT4: Pad is back up to a 5-star rating. Whatever caused the issue beforehand has apparently been ironed out. Pad is still responsive and without a mountain of padding in the middle.

Joe Lodin
2.0 out of 5 stars Decent pad, extremely poor quality on the "raised foam" arrows.
Reviewed in the United States on July 27, 2017
Color: DanceVerified Purchase
Unpacked this pad and it worked fine right out of the box. Painless plug-and-play connection; worked fine with Stepmania. My whole issue is with the extra foam that D-Force uses to raise the arrows up. When I first unpacked and put together the pad, I found that the pad felt strange under my feet. The up, right, and left arrows felt correct, with a slight additional bump separating each arrow from the rest of the pad. However, the left arrow felt strange, as if there was an additional lump between the arrow and the center of the pad.

I was able to play the game on heavy for the most part, but the strange texture kept me from playing at my best. I especially noticed that I had trouble hitting doubles involving the left arrow since the bump would cause my foot to hit that arrow slightly sooner. The manual suggests that most issues like this are resolved by laying the pad flat for an extended period of time, so I followed those instructions and stored the pad under my couch. The next day, the bump remained and I still ran into issues while playing. At this point, I had given up on using this pad seriously, so I cut open the top just to see what was going on.

Under each arrow, there is a thin pad of white foam (note the image). The only thing holding these pads in place is some sort of sticky substance that covers the inside. There was nothing that prevented these foam pads from moving around in storage/shipping, so the clump I felt under the left arrow was the white pad that had shifted towards the center, overlapping with the center and down arrow. I believe it's this same poor packing that has caused other complaints about this pad, most notably people claiming that the arrows have "shifted" towards the center over time.

If you want to use this pad, keep in mind that at some point you might need to cut open the top surface and realign the white foam, or remove those pads all for yourself. Unfortunately I destroyed the bottom sensor during my troubleshooting, so this dance pad is going into the trash. I don't plan on purchasing another one, as a $85(!!!!) pad should have a much more stable build quality than this.
Read more

keepfrozen
5.0 out of 5 stars So excited!!
Reviewed in the United States on June 6, 2019
Color: Dance+PumpVerified Purchase
Day 1: Best purchase I’ve made in a loooong time. I remembered how much I loved DDR when I was younger and decided to get a mat and get back in shape (emphasis lol) I’m playing it with DanceMania and it’s as fun as I am sweaty- VERY!!! The mat worked right out of the box just had to assign the keys in the software, and the arrows seem pretty sensitive so no stomping needed.
Read more
4 people found this helpful
Helpful
Comment Report abuse

UPDATE 3: Just discovered today that you can dance better on this pad while holding onto a desk or bar, lightening the weight of your body against the pad sensors. This greatly increases accuracy of steps, allowing you to pass harder songs.

Let me explain: When it first arrived a month ago, It worked great with 300+ combos and such! But after just a month of heavy use on Stepmania (400+ taps per song, 9-foot difficulty minimum) it's starting to show its limitations.... especially these:

Some of these errors may be attributed to sloppy dancing on my part, but not in most cases.
I loved D-Force's quick delivery, and their pad is still working fine. But for me, I need something more reliable, hardy and accurate to continue enjoying the game, so I'm buying an Omega GX.

I chose the D-Force Foam pad after hours of research, and I'd highly reccommend it to intermediate to advanced players... it's in the same league as my old Red Octane Ignition soft pads (the Ignitions seemed to have lasted longer, though, without these problems... but even they broke too, pretty severely at that).
Read more
18 people found this helpful
Helpful
Comment Report abuse
See all reviews

Andrew Campbell
4.0 out of 5 stars Best you're going to find in 2020, I think.
Reviewed in Canada on September 2, 2020
Color: Dance+PumpVerified Purchase
This product just arrived today on the earliest day shipping was possible to arrive. I ordered from Ottawa, Ontario, Canada. With shipping The mat cost me less than $200 Canadian.
It looks almost identical to the Red Octane 2.0 Pads I used back when DDR was popular.
The pad took about 30 seconds to map inputs into Stepmania's settings, no issues there.
The texture on the top of the mat where you step is more slippery than I recall the Red Octane pads being, I may feel more comfortable in bare-feet, or purchasing some socks with some sort of grip. I am confident the mat will grow more comfortable as I continue practicing.
I really think this is as god as foam dance mats get these days, the only major negative I have experienced so far is the texture of the mat being too slippery.
Read more
Report abuse
See all reviews
Pages with related products. See and discover other items: pc games for windows 8.1, pc games windows 10 compatible, Best ideas for runners, Runners Tapes, Best floor mats in squares for gym, Explore play squares for floors