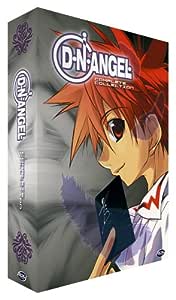 Adapted from the international best-selling manga series by Yukiru Sugisaki, DNAngel is a romatic adventure with a fantastic premise. High School hottie Risa has two suitors: shy Daisuke and the magical thief Dark. But the twist is that Daisuke and Dark share the same body, and it's Daisuke's love for Risa that allows Dark to take over! The only way to resolve this romantic disaster is for Daisuke to win the heart of his true love-but since she's only got eyes for Dark, that's not happening anytime soon!

The broadcast series DNAngel plays like a junior version of X crossed with Saint Tail. Daisuke Niwa is polite, well-intentioned, and talented, but he's also physically clumsy and socially maladroit. He can't bring himself to confess his love to his pretty classmate, Risa Harada. On his 14th birthday, his weird mother and grandfather tell Daisuke that a family genetic quirk will now manifest itself, and he will transform into the supernatural thief, Dark Mousy. His grandfather's rabbit-like pet With turns into the dark, feathered wings that are de rigueur for this type of anime character. Despite the unfortunate name, Dark Mousy is what Daisuke would like to be: a tall, dashing bishonen (beautiful boy). Risa falls for Dark like a bento box of rocks, but as Dark, Daisuke accidentally kisses her twin sister, Riku, creating an adolescent romantic triangle.

Having created a situation and several characters, the filmmakers don't seem to know what to do them. Many of Daisuke's adventures as Dark have little or nothing to do with his career as a supernatural thief, and the tone of the episodes shifts erratically from mawkish to silly to melodramatic. Although Daisuke supposedly transforms into Dark, the alter ego sometimes appears as an independent entity. Hard-core bishonen fans may enjoy Dark's sultry charms, but most viewers will grow impatient with the unfocused stories and poorly defined characters in DNAngel. (Rated TV PG, suitable for ages 10 and older: mild violence) --Charles Solomon

Corrina-Michelle Sutton
5.0 out of 5 stars Absolutely perfect
Reviewed in the United States on May 9, 2020
Verified Purchase
Came in in perfect condition. Me and my brother binged the series again and it all played smoothly. Cant be happier
Read more
Helpful
Report abuse

Christianpoetwannabe
5.0 out of 5 stars Intriguing story
Reviewed in the United States on December 10, 2012
Verified Purchase
I encourage any potential fans to read the manga, as I think it's better and more interesting. However, I also love this anime. It has weird moments where something may be awkward or not make sense, but all in all I love it. I love Daisuke and Dark, and they make the anime worth watching. I recommend this anime to fans of action and intrigue.
Read more
Helpful
Report abuse

Amazon Customer
5.0 out of 5 stars My Sister Loved It
Reviewed in the United States on March 22, 2013
Verified Purchase
I bought this as a present for my younger sister, who had just recently gotten into anime. If you're a teenage girl and enjoy ridiculous anime with an attractive protagonist who has a mysteriously dark side, you will love this. She certainly did.
Read more
Helpful
Report abuse

Traci Dawn
4.0 out of 5 stars 4 out of 5
Reviewed in the United States on September 17, 2013
Verified Purchase
The box set looks gorgeous on shelving with all the other anime. I'm going to give this a 4 star out of 5, simply because I first watched this when I was younger and thought the love was more intense in this anime as a child, then what it really was watching it as I was more mature and able to understand things more clearly. Though there is a love mix in this anime...its really focused on the Dark and the tale behind who he is and what he does/how he is perceived in society. The boy who winds up being dark this time around is a loving character and you fall in love with the characters very quickly. There is a bit of drama such as dark liking the girl that the other boy likes...but its very entertaining. I would buy it again. Only counting a star off because it lacked the nostalgia from what I remembered as a child..though that's not to say that this a very good anime.
Read more
Helpful
Report abuse

Selina Hill
5.0 out of 5 stars Great Buy!
Reviewed in the United States on January 1, 2013
Verified Purchase
This series is very entertaining. it contains happy and sad moments that keep the story going. You will find yourself guessing at what happens next...
Read more
Helpful
Report abuse

An E
5.0 out of 5 stars Worth every penny!
Reviewed in the United States on October 3, 2008
Verified Purchase
This collection is great, it comes in english, and japanese audio (w/ english subs) it includes every episode, easy menu options, the cover art is great, including the ones in each of the 4 discs. The images are nice and clear, you can skip the intro and ending unlike most jap. imports that don't and have to fast forward, but it really is great and i recommend it for any DN Angel fan!
Read more
One person found this helpful
Helpful
Report abuse

Cynthia D.
4.0 out of 5 stars Four Stars
Reviewed in the United States on January 16, 2015
Verified Purchase
Only took off one star, because the dvds were out of order. O.O"
Read more
Helpful
Report abuse
See all reviews

Christopher. W. Evans
5.0 out of 5 stars excellent
Reviewed in the United Kingdom on January 22, 2008
Verified Purchase
I have to say this was my first Anima I have seen but it seems I made the right choice in purchasing this DVD,I found that the storyline was excellent and you could not help but love the charcters. since watching it I have been looking up what Anima to watch next I was not knowing what to expect when I purchased this DVD after being told by a friend its well worth the money. these DVDs have made me fall in love with anima and introduced me to it as well and I am glad this box set is well worth the monkey specaily since u save more money buying the complete collection to buying the volumes

all in all I am a very happy lad with my D.N.Angel DVDs.... Dark rules!!
Read more
One person found this helpful
Report abuse

HaremSexyJutsu
5.0 out of 5 stars Awesome Product and Customer Service
Reviewed in Canada on February 10, 2012
Verified Purchase
I received my box set in a quick and short amount of time. It was in excellent condition. Customer service was superb! ^_^ Thanks alot for making it possible. I appreciate it.
Read more
Report abuse
See all reviews