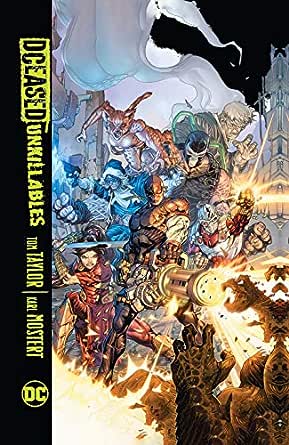 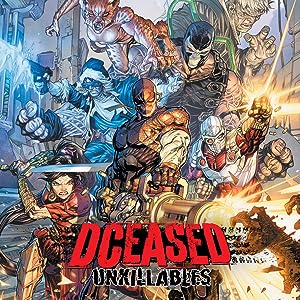 When will I be charged for each book?
Pre-orders will be placed within 24 hours, but you will not be charged until books are released and ready for download. We will automatically charge your default payment or other payment method on file.
You've subscribed to DCeased: Unkillables (2020-)! We will preorder your items within 24 hours of when they become available. When new books are released, we'll charge your default payment method for the lowest price available during the pre-order period.
Update your device or payment method, cancel individual pre-orders or your subscription at
Your Memberships & Subscriptions
There was an error. We were unable to process your subscription due to an error. Please refresh and try again. 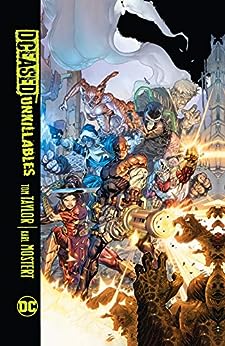 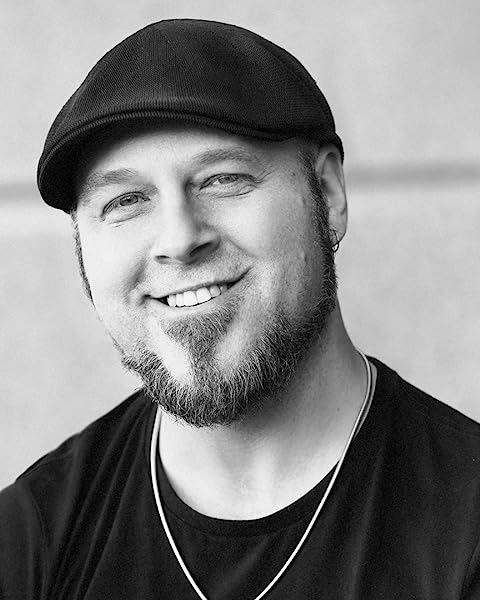 Once a professional juggler and fire eater, Tom Taylor is a #1 New York Times best-selling writer, playwright and BAFTA nominated screenwriter.
Currently writing DCEASED and SUICIDE SQUAD for DC Comics and FRIENDLY NEIGHBORHOOD SPIDER-MAN for Marvel, Taylor is well known for DC's hit series, INJUSTICE and Marvel's X-MEN: RED and ALL-NEW WOLVERINE as well as his many STAR WARS works, which include the recent AGE OF RESISTANCE series, set before Episode IX.
Taylor is the co-creator, executive producer and lead writer of the Animated series, THE DEEP, on Netflix and BBC, based on his graphic novels of the same name. --This text refers to the hardcover edition.

4.9 out of 5 stars
4.9 out of 5
337 global ratings
How are ratings calculated?
To calculate the overall star rating and percentage breakdown by star, we don’t use a simple average. Instead, our system considers things like how recent a review is and if the reviewer bought the item on Amazon. It also analyzes reviews to verify trustworthiness.

CB ReviewTop Contributor: Batman
5.0 out of 5 stars Fantastic, Action-Packed Side Story
Reviewed in the United States on August 28, 2020
Verified Purchase
Villains, anti-heroes, and ordinary humans band together to survive the anti-life apocalypse in this self-contained companion piece to DCeased. I've seen someone describe this as a tense zombie movie with the spectacle of a superhero tale, and I think that about sums it up. Whereas DCeased (which is also fantastic) was more of a slow, tragic, almost journalistic story about the fall of society, this is much more like an on-the-ground, action-packed, claustrophobic tale of survival. The art by Mostert, Scott, et al. is stylized but effective--a bit blocky and rough for my taste, but ends up working as the story picks up its pace.

Though it's difficult to describe, this story has the feel of the 52 (secondary characters in the spotlight) mixed with Forever Evil (badass villians fighting for good), with a heavy dose of Suicide Squad (gruesome, tragic, and hilarious in equal parts). This is a true ensemble, with unexpected characters taking the lead at different times in ways that truly had my blood pumping. I still can't believe this book had me liking Cheetah, of all people--one of those stock bad guys that's almost always around but usually doesn't do much--but here, I cared (deeply) about her and others. That's how you know you're dealing with a master storyteller.

All in all, I think this is another home run for Tom Taylor. I really strongly recommend it to anyone who loved DCeased and who can handle that level of gore and tragedy. You won't want to miss this.

eugene castellucci
5.0 out of 5 stars Love this book.
Reviewed in the United States on August 25, 2020
Verified Purchase
Love the story, but it states that is issue 1 to 6 when its actually 1 to 3. I thought maybe they had 2 extra issues that DC didn't release. I have the 3 issues and of course wanted the jarfcovet. DC needs to make sure description is correct. All retailers listed what DC had listed on thier web site. Overall love this book. It was awesome that they showed what happened to the heroesvleft behind and when it started.
Read more
6 people found this helpful
Helpful
Comment Report abuse

Orin Mount
4.0 out of 5 stars It one of the only good stories to come out of Dc in a long time.
Reviewed in the United States on October 23, 2020
Verified Purchase
So its not secret that Dc has went the way of sjw so I was worried when this story started coming out. So far I have not really been all that disappointed by the dceased story line. The last fight with wonder women was kind of meh because they dont reference all of the villains that trained the kids. What I mean by that is that they only reference the female super villains that trained the kids. It would have added more to the story, if they had shown something that the new Shazam gained from each of the villains during the fight.
Read more
One person found this helpful
Helpful
Comment Report abuse

keith a kiser
5.0 out of 5 stars Short and sweet but I LOVED it!!!
Reviewed in the United States on September 4, 2020
Verified Purchase
I wish the book was twice the size. I read it easily in 1 sitting (could not put it down). I absolutely Loved the book and cannot wait till they do more in the DCeased line.
Read more
2 people found this helpful
Helpful
Comment Report abuse

Sharklar
5.0 out of 5 stars Unkillables turns monsters into heroes
Reviewed in the United States on August 29, 2020
Verified Purchase
Loved it , Deceased is extremely dark and yet heart felt all out favorite characters facing the horrors of the apocalypse. Unkillables turns monsters into heroes that are easy to get behind. Highly recommend it if you liked the main story.
Read more
2 people found this helpful
Helpful
Comment Report abuse

Amazon Customer
5.0 out of 5 stars if you enjoyed DCEASED pick this one up
Reviewed in the United States on August 26, 2020
Verified Purchase
Excellent companion for DCEASED. Storyline of a group of villians while the virus is running loose
Read more
3 people found this helpful
Helpful
Comment Report abuse

Joy
5.0 out of 5 stars Worth the cost hands down
Reviewed in the United States on September 3, 2020
Verified Purchase
Wow! Out of all the graphic novels (TWD, Trees, Etc) and books read in general lately this has to be among my favourites. The writing is excellent and just as good as the artwork. Hard to find a title that excels n both areas. After reading the first I had to pre order the second!!
Read more
2 people found this helpful
Helpful
Comment Report abuse

Skyangel1014
5.0 out of 5 stars Dceased unkillables part 2
Reviewed in the United States on September 27, 2020
Verified Purchase
If you picked up the first deceased, buy this book as well. Awesome story, But also sad to see your favorite villains turn to zombies!
Read more

Ishtiaque Ahmed
5.0 out of 5 stars Must Buy!!
Reviewed in the United Kingdom on November 7, 2020
Verified Purchase
This was awesome, although the art isn’t great at times the story itself is amazing if you are a DC fan who loves villains and Ant-heroes like Deathstroke and Red Hood who steal the show, the first issue takes place during Deceased but Issues 2 and 3 happen after Dceased, so the Villains and anyone who couldn’t get on the ships are left and we see this interesting dynamic between the survivors and Villains and when Jim Gordon comes in questioning their tactics you see that good morals have really been thrown out the window here
Read more
Report abuse

Mrs H
5.0 out of 5 stars Unkillable but mega readable
Reviewed in the United Kingdom on August 29, 2020
Verified Purchase
Brilliant hardback edition. The story and art is fantastic. It runs parallel to the main Dceased story and in Unkillables it's the villains time to shine. The book is quite short as the Unkillables story was only 3 issues but what a 3 issues! There's almost nonstop thrills, spills, drama and tragedy. The books also quite violent so any parents may want to proof read first. I loved this book and even got teary eyed at the ending. This book leads into the third chapter called Dceased Dead Planet
Read more
One person found this helpful
Report abuse

Am Sanders
5.0 out of 5 stars Bring on the villains
Reviewed in the United Kingdom on September 1, 2020
Verified Purchase
Loved DCeased & this side story is a great companion piece, following the villains during the infection.
Though it's not as many issues I still was hooked enough to read it cover to cover in one sitting.
Def not a kids bedtime story though, as it is quite violent & gory,...obviously.
Read more
Report abuse

Dyane Everitt
5.0 out of 5 stars Great delivery-Arrived early
Reviewed in the United Kingdom on November 14, 2020
Verified Purchase
Bought for adult sons Birthday present as he is a fan. Well packaged so as not to get spoilt or bent in any way.Great for collectors
Read more
Report abuse

DARREN AINSWORTH
5.0 out of 5 stars Amazing Story!
Reviewed in the United Kingdom on August 29, 2020
Verified Purchase
Great Art, Great Story, Great character development. Pretty emotional in places. I loved seeing what became of the villains after the World had gone to hell. If you loved DCeased you’ll love this!
Read more
Report abuse
See all reviews