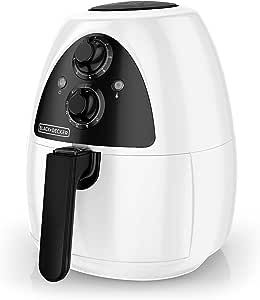 Buy this product as Renewed and save $6.50 off the current New price.

The Black+Decker PuriFry Air Fryer cuts out the oil to give you crispy food without the added fat. A pair of powerful convection fans surrounds food with heated air to cook all of your favorite fried delights quickly and evenly. The variable temperature control ranges from 0-400 degrees and the 60-minute timer automatically shuts off the machine once cooking is complete. The frying basket can hold 2 liters (about 8 cups) of food, making it easy to fry up snacks or a main dish for the whole family. The Black+Decker PuriFry is the revolutionary way to enjoy deliciously crispy fried food with all the flavor and none of the guilt.

The Black+Decker Deep Fryer brings restaurant-quality fried foods into your home! Make juicy, tender chicken wings for your next gameday party, or fry up crispy onion rings as a side for your burger.

4-qt. and 3-qt. steaming baskets, built-in egg holders and a 5-cup rice bowl, you have all the room you need. Plus, enjoy a wide range of convenient features like a 75-minute timer with automatic shutoff and ready signal bell, a Flavor Scenter herb screen and an external water fill opening for fast filling without the need to interrupt steaming.

This rice cooker lets you make up to 16 cups of delicious, fluffy cooked rice. Great for white, brown, or flavored rice side dishes, 7 cup uncooked Rice. The removable bowl is submersible and has a non-stick coating for easy cleaning.

Get nutritious cooking in a compact design with our 4 Serving, Classic Plate Grill. The 60 Sq. In. cooking surface is perfect for 3-4 servings and features all of the features you’ve come to expect from George Foreman.

A high power convection fan rapidly circulates hot air around the food for a crispy fried taste with little or no oil.

Delicious fried food is finally guilt-free. The BLACK+DECKER PuriFry Air Fryer cuts out the oil to give you crispy food without the added fat. A pair of powerful convection fans surrounds food with heated air to cook all of your favorite fried delights quickly and evenly. The variable temperature control ranges from 175-400° and the 60-minute timer automatically shuts off the machine once cooking is complete. The frying basket can hold 2 liters (about 8 cups) of food, making it easy to fry up snacks or a main dish for the whole family. The BLACK+DECKER PuriFry Air Fryer is the revolutionary way to enjoy deliciously crispy fried food with all of the flavor and none of the guilt.

4.5 out of 5 stars
4.5 out of 5
764 global ratings
How are ratings calculated?
To calculate the overall star rating and percentage breakdown by star, we don’t use a simple average. Instead, our system considers things like how recent a review is and if the reviewer bought the item on Amazon. It also analyzes reviews to verify trustworthiness.

Andrew McGarity
5.0 out of 5 stars Works perfect for what I want it for!
Reviewed in the United States on July 5, 2015
I bought this at Costco last week after debating about buying an air fryer for the longest time. The big question I had was if it was different enough from an oven to be worth getting. Particularly I wanted to use it for health-ish fried foods. After not being able to find a store that was doing samples with an air fryer I just went ahead and bought it and I couldn't be happier.

The black and decker airfyer is great because it fries food with little to no oil and they come out juicy and crispy without all the oil. I've made potato chips, French fries, hamburgers, fried chicken, vegetables and even cakes.

It requires little to no preheat time so it's faster than an oven, and is a lot easier to clean than an oven.

This machine is amazing. My only complaint is that while the amount of food you can cook at is perfect for 1-2 people, it doesn't fit enough if you're making food for a larger group. You end if having to do 2-3 patches.

Hak Kaida
5.0 out of 5 stars Crispy with no oil
Reviewed in the United States on November 2, 2018
Verified Purchase
I got this on the recommendation of a coworker and it is pretty amazing. Just drop things in the basket, set the timer and temp, and let it do its thing. Food comes out crispy, with no oil! I know some things might come out better with a spoonful of oil, but I havent had to do that. Very little external "smells", but there is some, which if you are cooking you really cant avoid. The basket and bin are all non-stick, so its literally a rinse and quick cleaning and its ready to cook the next thing. I havent done burgers or meat, but frozen potatoes of all types are delicious. Next I will try to do some fried chicken. Believe the reviews, its that good!
Read more
21 people found this helpful
Helpful
Report abuse

Miranda
5.0 out of 5 stars 12 / 10
Reviewed in the United States on November 4, 2017
Verified Purchase
I have told all my friends to buy this. I've bought it for my family members. This is the future. Right here. BUY THIS.

I make chicken or sweet potatoes in this DAILY. Buy some breadcrumbs, put it on the chicken, and in 15-20 minutes, you legit have HEALTHY chicken tenders. Its amazing. I could go ON and ON on why you should buy this. It will change your life.

B. Dancy
4.0 out of 5 stars Great Product - Poor graphics
Reviewed in the United States on July 18, 2017
Verified Purchase
Never owned an air-fryer before and wanted to know what all the fuss was about. I wish the instructions were a bit clearer. Some of us older people are a bit technically challenged. I ran it for about 20 minutes (as many recommended to get rid of the smell) and it wasn't even warm. Well duh - I didn't turn the second dial for the heat setting. But that's primarily because the lettering is so tinsy, teenie, tiny (I mean faint 2 pt type) it didn't register as something to turn on. I have 20/20 vision and in full light I could barely make out the highest setting was 400 degrees. I just guessed everything lower. I cooked chicken wings which turned out nice and crispy outside and tender inside. Wash up is very easy and I can see using this just about every other day.
Read more
19 people found this helpful
Helpful
Report abuse

wastin’ money on amzn
5.0 out of 5 stars great easy to clean
Reviewed in the United States on June 20, 2016
Verified Purchase
I was a little concerned if I would use it or if the food would be soggy - it works great - easy clean up - it works awesome on things like taquitos and french fries

Stephanie
4.0 out of 5 stars Comparison between Philips and Black & Decker
Reviewed in the United States on August 8, 2016
Verified Purchase
I ordered this Black and Decker and the Philips 9220 and compared them for 3 weeks cooking various foods. In general, this was our first time using air friers are we are SOLD. I've had the best chicken, fish, vegetables, and more in these cookers all with very little-to-no oil.

Overall it was a very close competition. In the end, the Philips won for best taste due to the fact that the Black & Decker never lost it's slight plastic/chemical smell in the 3 weeks that we used it, which tinted all the food with a similar taste.

Here were our criteria ranked from most important to least:

Taste & Clean: The top two categories were the main contenders. As I mentioned above, the Philips won out for best taste. It cooked food evenly and to perfection without any hint of chemical taste from the get-go, while the B&D (while still cooking nice and evenly) didn't lose it's chemical taste.
That being said, the B&D was FAR easier to clean in the sink. Both bowl and basket units were entirely non-stick and the bowl unit was completely smooth at the bottom. The Philips was more of pain to clean than I hoped. Food sticks to the basket mesh pretty readily and it requires a bristle brush to clean (pad sponges leave bits stuck in the mesh). The raised contours of the bowl also make cleaning a bit of a chore. Both units do very well in the dishwasher, but take up a lot of room.

Price was the 3rd factor. The B&D is about half the price of the Phillips 9220, making it a pretty decent value. Unfortunately because TASTE was the ultimate deciding factor, it did not win out.

Capacity was about the same for both units. I found the Philips to be slightly more efficient simply because of the more square shape. That being said, the B&D includes a divider that allows you to pack in more food. The Philips unit has a double-decker accessory you can buy that works better that the divider IMO,

The Philips comes with a wide range of accessories available for purchase (I have not tried most of them), while the B&D does not.

Design: We bought the white versions of both units, which I am a big fan of. They look much cleaner than the glossy black which shows oil and fingerprints. They are very similar in shape, footprint, and functionality. I have an ever-so-slight preference for the Philips due to the slightly less egg-like shape and pretty metallic handle. The temperature dial knob is a bit finicky, certainly not a deal-breaker.

In summary, I really wanted the B&D to win due to the price and ease of cleaning, but ultimately it did not excel at it's primary job which is cooking delicious food.
Read more
691 people found this helpful
Helpful
Report abuse

Aurora
5.0 out of 5 stars I love it!
Reviewed in the United States on August 5, 2019
Verified Purchase
I absolutely love this air fryer! Food takes way less time to be ready to eat. So far I made hamburger, salmon, french fries, mozzarella sticks, bacon! (bacon is my fav thing to cook bc it doesn't gets oil everywhere and doesn't make my kitchen smell for days) I also use it to reheat leftovers from the restaurant when we go out to eat. It's basically a oven but it takes less time to preheat (I don't usually wait for it to preheat but I put the food inside immediately) and saves on your utilities bills LOL
To help the cleaning I usually put tinfoil at the bottom so I only have to clean the basket :)
Read more
6 people found this helpful
Helpful
Report abuse
See all reviews