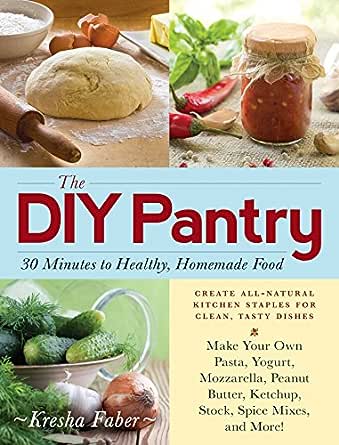 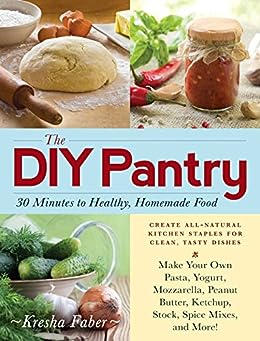 Kresha Faber is the author and editor of Nourishing Joy, a website dedicated to real food, sustainable living, natural homemaking, and joyful parenting. She is passionate about sharing ways to make small, simple changes to live more healthily, frugally, and sustainably. Kresha is also a contributing writer to Keeper of the Home and GNOWFGLINS. You can visit her website at www.nourishingjoy.com.

4.6 out of 5 stars
4.6 out of 5
94 global ratings
How are ratings calculated?
To calculate the overall star rating and percentage breakdown by star, we don’t use a simple average. Instead, our system considers things like how recent a review is and if the reviewer bought the item on Amazon. It also analyzes reviews to verify trustworthiness.

city girl to country girl
5.0 out of 5 stars DIY natural eating
Reviewed in the United States on May 12, 2014
Verified Purchase
As soon as I found this book on Amazon, I ordered it. I don't usually do that, as I like to spend my money more judiciously and, if I can, check a book out at the library first beforehand. This book, however, was exactly what I was looking for in terms of expanding my repertoire of homemade goodies. I already make a number of diy pantry items but was unaware, or shall I say, did not think to make things like soba noodles or ginger ale on my own. As another reviewer mentioned, the gem here is having a comprehensive and diverse list of recipes in one book to reference as opposed to searching and pulling recipes up online. And with these recipes, I can be reassured knowing that they will not have vegetable oil, margarine, or pre-made, chemical-filled ingredients in them. I made the ranch dressing recipe yesterday with my existing homemade mayo and it was delicious! I was immediately inspired and empowered by the contents of the book and look forward to using it for many more years to come!
Read more
11 people found this helpful
Helpful
Report abuse

Bryan C.
5.0 out of 5 stars I love this book and and it's been an inspiration on ...
Reviewed in the United States on June 25, 2015
Verified Purchase
I love this book and and it's been an inspiration on many levels. Admittedly, I found that I was already following many of its recommendations--stock, peanut butter, homemade pasta, pizza and bread, and others, but I found plenty more that made this purchase well worth the money spent. As I said, I strongly recommend it. Having said that, I'm wondering if I haven't found a mistake. This may not be the perfect venue to broach this subject, but it is what is--the recipe for DIY vanilla extract seems flawed, at best.
The recipe calls for placing vanilla beans in vodka and stashing it away--standard practice, based on my research and experience. However, the recipe recommends using two cups of 80 proof at least vodka and 10-20 vanilla beans and letting it rest for 9 months. Seriously? You're talking a small fortune to make 2 cups of vanilla extract. Google "making vanilla extract" and you'll come up with $15 kits that include 5-7 vanilla beans, a container in which to make the extract and a recipe--like you need one--and a finished product in 8 weeks. I haven't tried them, but plan to. One site, Beanilla, even lets you pick the vanilla beans you want with your kit--personally, I'm a sucker for Ugandan vanilla beans, though they are are not as affordable as they once were. The flavor, however, is bold and smokey. My second choice would be Mexican, since we live in Nicaragua and all vanilla sprang from Mexico and Central America. It took the French, not surprisingly, to develop the modern vanilla industry largely based in Madagascar--and that industry sprang from a local's ingenuity, who developed the process of hand fertilization. The bees that fertilize vanilla in Mexico and Central America don't exist anywhere else.
Bottom line: buy the book but find another vanilla extract recipe--unless you're Donald Trump and have more money than common sense.
Read more
22 people found this helpful
Helpful
Report abuse

Dawn M. Tromontine
5.0 out of 5 stars Great book to get you started on a DIY pantry
Reviewed in the United States on March 25, 2015
Verified Purchase
This is a great book for those of us trying to minimize the 'extras' found in items we usually purchase. I have made several recipes from this book already. My only complaint would be that there are a few inconsistencies. The recipe for sauerkraut calls for a medium size head of cabbage 2# & another recipe calls for a small head of cabbage also 2#. And, incidentally, I needed 2 quart size jars to make the sauerkraut using a 2# cabbage. With that being said, overall, this is an excellent book to get you started on a DIY pantry. It was definitely worth the cost.
Read more
11 people found this helpful
Helpful
Report abuse

Reader from Rice Lake
5.0 out of 5 stars Indispensable
Reviewed in the United States on July 4, 2017
Verified Purchase
I keep coming back to this book for help with ingredients in other recipes that I don't want to buy in a can or a box. Cream of Mushroom Soup, Dry Onion Soup Mix, Stovetop Macaroni and Cheese. The recipes are easy-to-follow, delicious, and our bodies feel so much better for eating this way. Thank you, Kresha Faber, for adding to our family's health. You'll find salad dressing recipes, sauces and salsa, and even soda pop recipes!
Read more
5 people found this helpful
Helpful
Report abuse

KBArias
4.0 out of 5 stars Pretty spot on recipes
Reviewed in the United States on January 25, 2015
Verified Purchase
Really great book, and for the most part pretty darn tasty recipes. There are only a few I haven't liked so far (the one for "cream cheese" comes to mind-I May sub out the olive oil for coconut oil next time I make it). Overall, though, recipes are pretty spot on. I have started making everything from scratch because I dislike all the processes junk in food these days, and wanted a healthy alternative to give my family. This book is definitely helpful in that regard.
Read more
17 people found this helpful
Helpful
Report abuse

Sarah
5.0 out of 5 stars Extremely Helpful and Useful!!! A Must Have!!!
Reviewed in the United States on July 4, 2015
Verified Purchase
I originally checked this book out at my local library... After reading and reviewing it I deemed it a must have!!!! Great useful recipes that go back to the basics! Say goodbye to processed foods! I really like how the book is organized and each recipe has a table that tells; how long it takes to prepare, difficulty level, yield, cost per serving, gluten free/vegan/vegetarian/dairy-free/egg-free, and nutrition information. The book even advises you on how long to store the recipes once they are made! Love this book!!!
Read more
8 people found this helpful
Helpful
Report abuse

BluegrassBabe
5.0 out of 5 stars LOVE IT !!!
Reviewed in the United States on March 15, 2015
Verified Purchase
This has become one of my favorite recipe books. It's definitely a cookbook that I go to first when I need a basic recipe. The author OBVIOUSLY has made each and every recipe. She give helpful tips where applicable. She tells you how long you can expect the recipe to last as many of them are without preservatives. I am very happy that I chose to put this one in the kitchen.
Read more
3 people found this helpful
Helpful
Report abuse

CC
5.0 out of 5 stars Great resource in hard times
Reviewed in the United States on March 18, 2020
Verified Purchase
I got this right at the beginning of quarantine. Let me tell you that this book helps a lot. I just need to buy basic ingredients and we'll be able to make things ourselves.
Read more
Helpful
Report abuse
See all reviews

Julie Boulet
4.0 out of 5 stars Good purpose!!
Reviewed in Canada on April 10, 2016
Verified Purchase
I have made a few recipes, and they all turned out good. I use the pasta sauce recipe as a pasta sauce and also in my homemade beef and vegetable soup. Flour tortillas, taco seasoning are also some of my favorites.
Read more
One person found this helpful
Report abuse
See all reviews