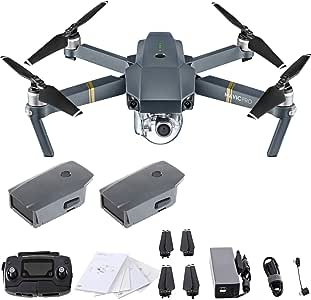 Visit the DJI Store
4.4 out of 5 stars 163 ratings
| 143 answered questions
Available at a lower price from other sellers that may not offer free Prime shipping.
› See more product details
New & Used (3) from $769.00 + FREE Shipping

4.4 out of 5 stars
4.4 out of 5
163 global ratings
How are ratings calculated?
To calculate the overall star rating and percentage breakdown by star, we don’t use a simple average. Instead, our system considers things like how recent a review is and if the reviewer bought the item on Amazon. It also analyzes reviews to verify trustworthiness.

Daenerys Targaryen
VINE VOICE
5.0 out of 5 stars The Top Gun of Drones!
Reviewed in the United States on March 4, 2019
My father has been wanting a high quality drone for years. He has purchased a few, but has never purchased a very high-end one for himself like this. So, for his 66th birthday this year, I wanted to get him a high quality drone. I did my research and decided that DJI was, by far, the best company for drones and was going to place the order here on Amazon. The only hang up was that he was unsure which model he wanted. Sadly, I did not purchase his Mavic Pro from Amazon, although I wish I had one of the bundles that come with extra batteries (which he really needed). This ended up being a last minute gift, only because we wanted him to be able to pick out the one he wanted and he refused to tell me a definite answer, as he didn't want me to spend "too much" on him.

I knew I wasn't going to be able to keep this gift a surprise, and didn't want to, because I wanted to let him pick the model he wanted. He refused, so his girlfriend and I started texting about going to a local store that is open 24 hours a day at around 2am as soon as he turned 66 to buy the one I thought he would enjoy the most. He decided it would be a good idea to read all of her text messages while she was getting ready for our after midnight adventure (which I knew he would do; he loves to read her texts) so, when he found out about my plan, he insisted on tagging along. This was perfect: I could get him to go with us and decide from his reaction which one to get him. Devious, I know, but sometimes you have to be to get someone you love the perfect gift ;)

I just had to tell this backstory before giving you the pros and cons because my father said this is his favorite gift in all of his 66 years on this planet. That is extraordinary, because he has been gifted some very nice things over the years.

1. This drone is lightweight but sturdy. It has a built-in camera that pairs with almost any smart phone or tablet with ease, and takes the most beautiful and detailed aerial shots ever!
2. This drone comes with lots of extras (if purchased here on Amazon or from DJI).
3. This drone can reach amazing altitudes! Please, watch a few YouTube videos until I can post some (trust me, you will be amazed)!
4. The drone itself hovers as steady, and as silently as a hummingbird, with no tilting or shaking.
5. The take off speed is so astonishing, and the lights so amazingly bright, my father's neighbor thought she saw a UFO and came outside the first night he flew it.
6. My father has not stopped talking about this drone, and is finding new things it can do every day since his birthday. He always calls and jokes about how he is taking off or coming in for a landing and asking if it's all clear. The joy it has brought him is well worth the price a million times over.
7. I truly love DJI for making such a professional quality drone available for public use that has brought my father such endless happiness! This drone makes an amazing gift!

CONS:
1. The only thing I could even list as a con is that the drone does need an FAA license to fly over certain areas, which isn't really well known before purchase. This is no big deal though, because it is easy to get and very fast to receive the licensing, proper documentation and decals.
2. This drone could inspire many to listen to "Danger Zone" on repeat while flying; it is that fast, and the aerial footage is that realistic!

I would recommend DJI and the Mavic Pro to anyone who is an avid drone user, whether they are a professional, adventurer, or hobbyist!

I have seen other drones in flight, and the Mavic Pro is the Top Gun of them all!

Please rate my review as "Helpful" if it helped you :) I like to read reviews before buying and return the favor, so when I find a great product (or a bad one) I enjoy sharing my experiences, because I like many of you rely on reviews before purchase :)

James Crow
5.0 out of 5 stars 107 LICENSE, THAT WILL KEEP YOU OUT OF TROUBLE WITH TBE FAA.
Reviewed in the United States on October 12, 2018
Verified Purchase
Takes for ever to get the 107 license, the drone must be registered with the FAA
Read more
59 people found this helpful
Helpful
Comment Report abuse

Clifford Holzner
5.0 out of 5 stars Very reliable no worries about loss of drone.
Reviewed in the United States on September 7, 2018
Verified Purchase
I have been flying drones for about a year.
The Mavic Pro is by far the best camera quality and the drone control is awesome.
Read more
41 people found this helpful
Helpful
Comment Report abuse

Talha Malik
5.0 out of 5 stars A great product with few tips for new buyer.
Reviewed in the United States on April 16, 2019
Verified Purchase
This is an excellent product, I had it shipped to my mom who was on trip to USA and she on her way back brought it back to Pakistan. This product has an inherit weakness and that is its Gimbal, without warning you, It would someday earlier or later would start to throw Gimbal Over Load error and most of the folks out their exactly know the issue is mostly resolved by replacing the Gimbal ribbon. Now, I have learnt my hard lesson that is never travel without a gimbal lock in its place and annoying thing is, it’s hardly impossible to find the technical support inside Pakistan because Dji does not provide technical support to most of the countries and issue on my Dji mavic pro came without a crash and during travelling.
Anyway, I am a technical person, I always known, if you like to keep a machine, you should also have ability and expertise to perform all sorts of repairs on it otherwise, it always going to be disappointment and rip-offs. I learned a hard lesson, you should always have an extra Gimbal, few ribbons and video cable as accessories present with you apart from carrying bag, extra batteries and lot of accessories which you buy later for it.
Gimbal ribbon replacement on this is not straight forward and simple for new person, I ended up spoiling both the ribbons the first time I tried, obviously a big disappointment for the trip. Reason behind this was that most of the fellows teaching on youtube videos clearly misses the installation of middle part of ribbon and quotes something different and later once they figure out skips out on that part of video. Later on, once I had nothing to do, I got an idea, ironed my spoilt ribbon while new one was ordered and tried becoming expert on it that is where I figured out. So, apart from few ribbons and video cable, one should also have a spare gimbal so that he may practice on it and have it ready if issue arises then without wasting time, he should replace the entire and later once he had time, he could refurbished the old one.
A part, if folks in Pakistan are interested in more tips, then let me clarify that Pakistan does not have any specific drone laws but rule of thumb is, never fly anywhere close to the military or government installations. Further, make sure, once you fly, try not to attract lot of audience as drones still are not common in Pakistan and they not knowing the laws would try to confiscate it from you or you may end up doing lot of explanations. Do not fly where it bothers anyone or he/she may be curious. Much better would be, if you are on a trip, try take permission from local law enforcement agency, ask them if it’s ok for you to fly the drone and once they are on your side, try not to bother the locals in-order to avoid any complain. If you can’t do that, try find open areas with hardly any population.
Read more
26 people found this helpful
Helpful
Comment Report abuse

Zak Jambor
1.0 out of 5 stars WARNING! seller ships 'bad' items
Reviewed in the United States on August 13, 2019
Verified Purchase
Had to return. As soon as I opened the box, I new there would be problem.

1. Clear signs of significant use (was not labelled a refurbished drone even though this was verified to be the case).
2. Cables missing, no SD card, as specified in order, no protective gimbal bubble (had to supply my own remore charge cable)
3. First flight produced image guidance to phone. Second flight, I decided to try recording and was met with nothing but black screen. Tried to stop recording and still could not receive an image. Double checked firmware updates, reinstalled app, and tried on new device. Nothing.
4. Tried calibrating gimbal and the provide picture was what "level" looks like.

It appears that the gimbal was never attached correctly and rather that attempt to repair something that should come working, I'm seeing that I was sold a lost cause from the beginning.