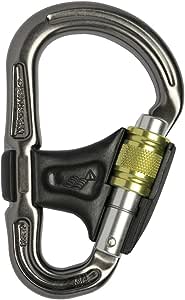 Visit the DMM Store
4.8 out of 5 stars 103 ratings
Available at a lower price from other sellers that may not offer free Prime shipping.

4.8 out of 5 stars
4.8 out of 5
103 global ratings
How are ratings calculated?
To calculate the overall star rating and percentage breakdown by star, we don’t use a simple average. Instead, our system considers things like how recent a review is and if the reviewer bought the item on Amazon. It also analyzes reviews to verify trustworthiness.
Top reviews

The only thing I don't like about this biner is that it has such a smooth action screwgate. When I'm putting it on my belay loop sometimes it closes a bit making it hard to get just right. I'm a woman with small hands and it's hard for me to hold the gate open without touching the screw, so while I push the belay loop through the gate of the biner, the screw closes a bit and gets in the way. This also happens when I put the belay device on with the rope in the belay device. I only mention this because I can forsee this being a huge hassle while doing multi-pitch routes. For fear of dropping my gear because I'm fumbling with the carabiner. For now, I will be using the Smart Alpine for top rope and for rappelling only until I figure that aspect out.

Andy Ngo
5.0 out of 5 stars Best belay carabiner out there, perfect for Mammut Smart Alpine!
Reviewed in the United States on March 28, 2017
Color: SilverSize: One SizeVerified Purchase
Very solid and safe locking HMS carabiner. I use this with the Mammut Smart Alpine to prevent the device from moving around and potentially cross-loading.

The plastic gate is effective and sturdy. I have never had a problem with the plastic gate coming off. However, when you do want to take it off, it comes off easily. The plastic gate removes the worry if the carabiner is locked or not, since it will only close when the screwgate is completely locked.

The screwgate takes minimal amount of effort to lock completely (takes about 3-4 turns to lock the carabiner).

TC
5.0 out of 5 stars Fantastic Product
Reviewed in the United States on March 3, 2015
Color: SilverSize: One SizeVerified Purchase
I go indoor climbing at a local YMCA and they require a locking screwgate with a plastic clasp if you plan to attach a carabiner to your harness. Otherwise, you have to tie in. This robust, carabiner did the trick perfectly and allows you to get people through much quicker and more efficiently. It's smooth opening, closing, and locking. The plastic clasp is also removable if you plan to use it as an anchor or feed multiple ropes through, which would not otherwise fit if the clasp was on. Highly recommended.
Read more
One person found this helpful
Helpful
Report abuse

Dogs n’ Sawdust
5.0 out of 5 stars we love this thing
Reviewed in the United States on December 19, 2015
Color: SilverSize: One SizeVerified Purchase
we love this thing. the only one we will use. keeps the belay device from cross-loading. we have 2 of them. it won't let you forget to lock it, because then the plastic piece won't close on you.
Read more
One person found this helpful
Helpful
Report abuse

Humphrey
5.0 out of 5 stars My 'go-to' belay biner.
Reviewed in the United States on June 14, 2014
Color: SilverSize: One SizeVerified Purchase
DMM carabiners are just so well made, and feel very smooth and slick. This ones no different and it has the added safety feature of preventing cross loading. Note the plastic clip that prevents cross loading can be removed relatively easily if needed and some may prefer a more permanent feature that doesn't come off, but I find it fine as it is.
Read more
One person found this helpful
Helpful
Report abuse

Smart Cookie
4.0 out of 5 stars Safety first
Reviewed in the United States on April 8, 2011
Color: SilverSize: One SizeVerified Purchase
This carabiner is great. I'd had a few incidents where I'd gotten cross-loaded while belaying and it concerned me. This carabiner is perfect for preventing that from occurring. I also like the fact that it is a great visual check. If I can look down and see that the plastic piece is closed, I know my carabiner is locked and safe. Ingenious idea!
Read more
4 people found this helpful
Helpful
Report abuse

G. Morris
5.0 out of 5 stars DMM Belay Master 2...everything it is cracked up to be!
Reviewed in the United Kingdom on September 15, 2012
Color: SilverSize: One SizeVerified Purchase
First off, the number 2 made me think this is a different model or something, i'm still not sure, but the one I got looks different from the one in the picture. The one I got was the one with the more metallic grey look, with ridges on the long side of the crab.

PROS:
This carabiner performs great! It totally eliminates cross-loading and keeps the correct orientation when belaying a loose rope, such as when leading or doing an inverted top rope climb. Also, the fact that the black flap only closes when the locking gate is shut totally eliminates the chance of forgetting to, and of having an insufficient-load-bearing-strength accident if the gate opens during a dynamic move. Also, it is super light!

CONS:
A couple of criticisms though; firstly, it is a bit small, when the black flap is closed there is not a whole lot of room for a belay loop, just enough and no more, secondly, the flap has sharp plastic edges that I noticed where tearing up my belay loop and destroying my harness! Quite a disaster if not caught in time, best file/sand the edges before use!
Also, going back to the size issue, if you have a belay device with a large connecting loop, such as with most ATC devices, then when belaying the connector loop can sometimes hit off the black flap; it hasn't caused an issue with me, as when the rope is tight, as in a descent, the loop passes over the top of the black flap.

Iain Crockett
4.0 out of 5 stars does what it says on the tin
Reviewed in the United Kingdom on November 11, 2013
Color: SilverSize: One SizeVerified Purchase
vey light weight and easy to use. I gave it four stars because with very little presure the safety collars crews up so tight it can be difficult to release it and the plastic rope gate has very sharp edges which I filed off after first use. I am sure both of these"issues" are because it is brand new. I would recommend it though.
Read more
2 people found this helpful
Report abuse

Paul
5.0 out of 5 stars Amazing - Crossloading be gone!
Reviewed in the United Kingdom on December 29, 2013
Color: SilverSize: One SizeVerified Purchase
So I'm not sure what I was doing wrong, possibly just getting a bit carried away belaying - but I was regularly cross-loading the rope. Not wanting to change what I was doing, I bought this on recommendation and it's great.

Makes belaying so much easier, once you know it's all in place you can basically forget about the karabiner.
Read more
One person found this helpful
Report abuse

A
5.0 out of 5 stars Good quality
Reviewed in the United Kingdom on February 19, 2018
Color: SilverSize: One SizeVerified Purchase
Arrived in 3 days and build quality is good it looks just like the photo
Read more
Report abuse

N. Minnis
5.0 out of 5 stars Strong device with a good safety lock
Reviewed in the United Kingdom on August 15, 2017
Color: SilverSize: One SizeVerified Purchase
This is a strong and secure device which has a safety lock. Recommended.
Read more
Report abuse
See all reviews