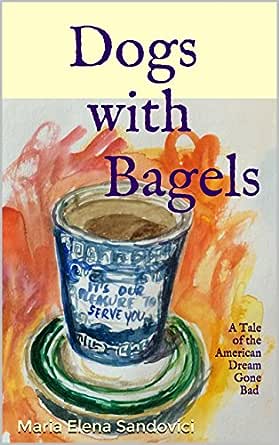 DOGS WITH BAGELS: A Tale of the American Dream Gone Bad Kindle Edition

4.2 out of 5 stars
4.2 out of 5
75 customer ratings
How does Amazon calculate star ratings?
Amazon calculates a product’s star ratings based on a machine learned model instead of a raw data average. The model takes into account factors including the age of a rating, whether the ratings are from verified purchasers, and factors that establish reviewer trustworthiness.
Top Reviews

dl
4.0 out of 5 stars A pleasure to read
Reviewed in the United States on January 22, 2015
Verified Purchase
I picked up this book because I am also a Romanian immigrant in the US. As I began reading, I soon noticed that I had nothing in common with the characters, but I was curious. I could peek into their lives and I could see their struggle and I was happy I wasn't the only one struggling to adapt. The story jumps from one character to another, but it's mostly the daughter and the mother. The daughter is a classical case of a young girl that tries to escape responsibility and the mother is a spoiled brat that had to work hard once she got to the US. All the characters are despicable in some way, the one I liked best is Victor, he seemed to be a really decent guy, but the fact that they are all flawed is nice and reassuring, makes them all the more real.
I loved how the author describes the way the characters think and what they think, I believe she has an excellent grasp on the way a woman's mind works and also on the traits that are so predominat in Romanians, especially the absurd pride we have all been cursed with.
It is a quick read and I went through it so fast mostly because i was so curious to see what the characters were up to next. I enjoyed reading it, can't wait for her next book.

Kindle Customer
5.0 out of 5 stars A story of a Romanian Immigrant
Reviewed in the United States on June 8, 2017
Verified Purchase
A young couple emigrate from Romania to America. They are madly in love with each other. He and their two children adapt quickly and well. She does not. She is completely miserable. Eventually, after years of unhappiness, it leads to separation. He has a six year affair. Then they reconnect. They have never stopped loving each other despite the feuds. Their grown children are judgemental, then amazed to see them together. I loved this beautifully written story. It is warm and human and alive with empathy for the woman who felt so disempowered, rejected and unappreciated, while consumed with guilt for a three-day escape from being a wife and mother. I thought though that the title was not particularly appropriate, although catchy, because while their daughter survived on bagels and almost nothing else, when she left home, the family only acquired a dog at the very end of the story.
Read more
Helpful
Comment Report abuse

Amazon Customer
4.0 out of 5 stars Two generations of immigrants have difference went, but similar problems in their new country
Reviewed in the United States on June 25, 2017
Verified Purchase
This is a very readable book that includes the fictional memoirs of Romanian immigrants, parents and two grown children. The differences of how the mother and father cope with learning the new language and the cultural nuances are eye opening. The fracturing of the family unit seems to derive largely from this divide. Bits of humor are interjected that make the sad incidents more acceptable. Overall, readers root for the middle aged estranged couple, hoping for reconciliation. The adult kids have their own problems that reflect upon their upbringing by loving immigrant parents. Their easier road to Americanization has it's own pitfalls. Good author worth having a look at her work.
Read more
Helpful
Comment Report abuse

Honey Bee
3.0 out of 5 stars F Bomb Much?
Reviewed in the United States on August 1, 2016
Verified Purchase
I really stink at writing reviews so I'm not even going to try. What I will say is you can believe what all of the other reviewers have written. This is a very, very good book. But I have one big complaint-it is the author's incessant use of the F word. She's a very talented writer, but her book is cheapened by this repetitive vulgarity. I would expect better from the author with her level of intelligence and talent. Hopefully the sequel will be better in this regard.
Read more
4 people found this helpful
Helpful
Comment Report abuse

LKS
5.0 out of 5 stars I really enjoyed "Dogs with Bagels"
Reviewed in the United States on July 28, 2017
Verified Purchase
I really enjoyed "Dogs with Bagels"! I was taken with L, the flibbertigibbet but spontaneously generous daughter, and mother Maria, shy and ultra-sensitive, who offends her expat Rumanian community with what appears to be standoffishness. I found her character poignant, even as she's misjudging and berating and isolating herself and fondling soft leather gloves she can never buy, only sell. She struggles mightily to find her way in her new country. The author makes a credible past history for her characters, and a future to look forward to. As a bonus, the food writing is wonderful!
Read more
One person found this helpful
Helpful
Comment Report abuse

J. M. Macomber
5.0 out of 5 stars Hope this author writes another!
Reviewed in the United States on January 1, 2014
Verified Purchase
When I started this book and thought it was going to be about Liliana, I was not totally engaged. But once I realized it was really Maria's story, I was hooked. Maria, Liliana's mother, reluctantly came to New York City as a young, naive refugee with her children and husband Victor. As the years pass, her unhappiness causes her to separate from Victor and to lead a lonely life living in Queens. While Maria's children have growing pains of their own, it is Maria's transformation that dominates. The integration of customs from Romania make the book a learning experience, as do the descriptions of the traditional foods. The first lines of paragraphs were not indented, which was distracting. Also, Maria seemed to speak English influenced by her native Romanian at times, and at other times, her speech was flawless. However, neither of these imperfections was serious enough to take away from the overall quality of the story.
Read more
3 people found this helpful
Helpful
Comment Report abuse
See all reviews from the United States

BrainybirdAA
5.0 out of 5 stars Enjoyable story
Reviewed in the United Kingdom on September 1, 2017
Verified Purchase
It was the title that pulled me to the book. I really enjoyed this story. Easy to read and follow and I readily connected to the characters as the story examined the relationships within the family. Highly recommend to genre lovers
Read more
Helpful
Sending feedback...
Thank you for your feedback.
Sorry, we failed to record your vote. Please try again
Report abuse

Adrian T
5.0 out of 5 stars A literary roller coaster ride......
Reviewed in the United Kingdom on February 15, 2014
Verified Purchase
A fantastic, well written novel, with characters that are hugely entertaining, larger than life, but never predictable. The numerous twists and turns in the plot will keep the reader guessing about the outcome of the Pop family all the way to the final chapter. Working contracts overseas I have time to read more than most, but I was unable to put this book down reading the book from start to finish in a single session and it is well worth the 5 stars allotted. The book would appeal to all who relish a roller coaster ride of a plot. Looking forward to any sequel.......and some sleep following this marathon read.
Read more
Helpful
Sending feedback...
Thank you for your feedback.
Sorry, we failed to record your vote. Please try again
Report abuse

Florina
5.0 out of 5 stars d, this is the book for you.
Reviewed in the Netherlands on January 30, 2017
Verified Purchase
If you are an immigrant you have to read this book. If your visit to New York meant something for you, more than another city in the world, you have to read this book. The American Dream turned bad. This dream was in all our parents life while leaving in the communism. Then you can recognoze so much of Maria (one of the main character) 's stubborness in my mother. But then again it is also the struggle with a new culture which we all, expats, immigrants or refugees have to face once decided to move. I could not leave this book. And when I nished it I went straight to the next one. Luckily the author brought her character to light once more. And if you also got into that sweet nostalgia while leaving for at least 3 years abroad, this is the book for you.
Read more
Helpful
Sending feedback...
Thank you for your feedback.
Sorry, we failed to record your vote. Please try again
Report abuse

I.
5.0 out of 5 stars sooo true! Don t try this at home!
Reviewed in Germany on March 23, 2014
Verified Purchase
Beautiful reading and instructive lesson of life. So, like in the Pub with the German coastguard: "We are sinking! We are sinking !" "What are you thinking....about!?" Improve your English first :)
Read more
Helpful
Sending feedback...
Thank you for your feedback.
Sorry, we failed to record your vote. Please try again
Report abuse

anna
5.0 out of 5 stars Excelent story!!!!
Reviewed in France on March 11, 2014
Verified Purchase
The kind of book that any imigrant could identify himself with, regardless of country or of continent. It is just the universal diary of any expat, such an unexpected fragile way of narrating a hursh truth.