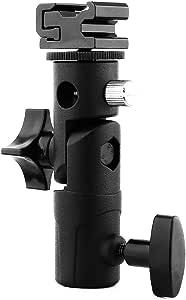 Note for: This flash bracket mount works for most dslr camera flash and Godox Neewer Yongnuo flash, but may NOT work well on for Sony and Minolta flash.

This bracket is an inexpensive way of mounting your speedlight (battery powered flash packs) from Canon, Nikon, Pentax, Olympus etc for flash style work to a flash stand or tripod. The bracket has screw fittings for the flash mount, umbrella and tripod/stand mount.

3.8 out of 5 stars
3.8 out of 5
1,417 global ratings
How are ratings calculated?
To calculate the overall star rating and percentage breakdown by star, we don’t use a simple average. Instead, our system considers things like how recent a review is and if the reviewer bought the item on Amazon. It also analyzes reviews to verify trustworthiness.

Digital Storyteller
2.0 out of 5 stars Inconsistent Bracket Quality
Reviewed in the United States on February 3, 2017
Verified Purchase
Neat product, good price, but the first two I ordered are missing metal washers and hardware for the handle. Third one I ordered is fine.

Also, what others are saying is true. These brackets will work better on stands with longer mount stems. Even those you have to carefully tighten the bracket. The temptation is to crank the handle as hard as you can to make it secure, but remember this is plastic and it can break.

If you don't want to go to this trouble, consider buying a much higher end bracket.

Jack
1.0 out of 5 stars Unit will not work with standard light stand ends or Manfrotto #119 Spigot
Reviewed in the United States on April 16, 2015
Verified Purchase
These units are all plastic, which surprised me but that is not the issue I have. The issue that lowers my review is the fact that a standard Manfrotto #119 spigot will not fit into the spigot (light stand end fitting). What good is that? and Why? Really makes these units unusable. As you can see in my photo - the unit is not deep enough for the spigot.
Read more

PWOOL
1.0 out of 5 stars Not worth the savings, go get a 'pro' metal model for the extra ten bucks.
Reviewed in the United States on April 9, 2015
Verified Purchase
Pros: Cheap.

This thing cannot hold a flash well if at all and forget about using flash with remote trigger base. Lost my previous speedlight to this thing having absolutely no grip.

I also think the assembler put the tightening screws in the wrong holes. The one for the umbrella is longer than the one gripping the flash bracket but at least on mine (both screws were nickel colored not like in the pic on here) reversing them luckily was possible (same dia.).

While it did improve grip marginally along with me using a pen-knife to carve a small counter sink into where the flash bracket screw goes into, I still didn't trust it and testing proved me right, my replacement speedlight fell out (into my hand since I was testing it over my lap carefully before actually using this).

Do not use, spring for one of the 'pro' models for the extra 10 bucks or so (one that comes with it's own spigot adapter too!). To paraphrase that commercial: Don't be like this me and try to save 10 bucks only to have to spend much more correcting the mistake. Bought this then realized I also needed spigot adapters to use it on my tripod (that one's on me though), but then the speedlight slipped right out onto the floor and broke so there was another purchase that had to be made because of this piece of... well you know.
Read more
6 people found this helpful
Helpful
Comment Report abuse

DaveTop Contributor: Photography
3.0 out of 5 stars A fix to make it go vertical
Reviewed in the United States on April 22, 2017
Verified Purchase
OK, this is cheaply made, but the price reflects that. So, I figured I'd give it a shot.

On first use, I noticed right away that if I wanted to use it to bounce a soft flash using an umbrella pointed straight up at the ceiling I'd have to make a slight alteration. The problem is that the umbrella goes in only one way because of a metal spring tab screwed into the hole that accepts the umbrella shaft. Because of the positioning of the plastic wing nut that attaches the unit to the light stand it prevents the umbrella and flash from going perfectly vertical.

So, what I did was completely back out the plastic wing nut that tightens the ratcheting horizontal/vertical adjustment, and tap out the hex bolt. Simply pull the top assembly out, rotate it 180 degrees, and slip it back in. Reapply the hex bolt and wing nut, and you are good to go.

I have no expectations that these cheaply made units will last long at all without the plastic eventually breaking or stripping out after tightening and retightening the wingnuts. My whole camera lighting rig at this point is on a budget, and I intend to replace everything as more money comes in from my beginning real estate photography business.

But, like I said, the price aligns with my expectations, so it's worth a try.

Three stars because this unit does do as advertised, but it's basically a cheap, disposable item.
Read more
One person found this helpful
Helpful
Comment Report abuse

Huckleberry
3.0 out of 5 stars Not horrible, but it could be fantastic
Reviewed in the United States on December 1, 2013
Verified Purchase
They technically work - I'll give them that. Impossible to really get wobble free. You just can't get these tight enough to be rigid, and even as tight as I can get them, I just don't have 100% confidence in the flash shoe holder part, especially when a $500 strobe is depending on it for survival.

For umbrellas or reflectors, they're superb, but in my case (and I'm probably a rarity), I shoot Sony/Minolta so to mount a flash on one, I have to use an adapter between the clamp contraption and my strobe, which also adds some wobble and uneasiness.

I will at some point spend some quality time with these and a dremel to deepen the flash show channels, but for now they are getting very limited use. The first time I used them on location, I went to change the output on a strobe and LUCKILY used both hands, or the flash would have met the rocks in an unfriendly manner; it just came completely off as I pressed a button. Once shaken, my confidence in gear is slow to rebuild, and I spent the next two hours worrying that my flash was going to meet an untimely demise at any moment. It didn't, but it wasn't for lack of the possibility.

The price is right, so if my dremel surgery goes south I won't have to BK, but I'd prefer they not need it to begin with. Also - the screw to tighten the modifier shaft is kind of small and sharp - it deforms the tube if you get it too tight, and even then, it doesn't SEEM to really hold it still. The one that tightens it to the stand it OK because the stand ends are solid. I suppose one could put a shim in the umbrella socket to keep it from gouging the tube, but at this price, how much modification time do you really want to spend?

I think with minimal effort, the manufacturer could correct the two issues and have a really spectacular product at a great price and sell buttloads more, but as it's designed now, it's a little iffy for holding expensive strobes.
Read more
One person found this helpful
Helpful
Comment Report abuse
See all reviews

JDW
3.0 out of 5 stars Flash holder functional but cheap
Reviewed in Canada on November 16, 2015
Verified Purchase
This is capable of doing the job but you get what you pay for, it's cheaply made. However, it's only holding the weight of a flash. The weakest aspect is the actual clamp for the flash - just a tiny button screw going into a plastic thread and the clamp jaw is a very loose fit, It works OK only if the flash is centered relative to that screw. To use this with a 600EX-RT I shaved off the clamp and holder deep enough so the flash could sit centered (this is due to the rubber flange on the flash that prevents it from being mounted anywhere other than the edge, i.e. I created a new "edge" closer to the center).

I'll use it, but won't likely buy another.
Read more
Report abuse

Page 1 of 1 Start overPage 1 of 1
This shopping feature will continue to load items when the Enter key is pressed. In order to navigate out of this carousel please use your heading shortcut key to navigate to the next or previous heading.
Back
Next
Pages with related products. See and discover other items: home photography studio, flash studio, brolly box, photography studio, softbox light, tripod photography