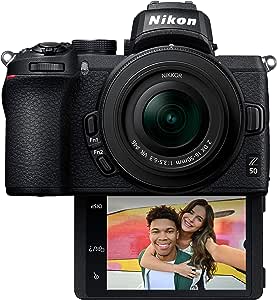 Visit the Nikon Store
4.6 out of 5 stars 41 ratings
| 36 answered questions
Amazon's Choice recommends highly rated and well-priced products.
Amazon's Choice for "nikon z50"
Available at a lower price from other sellers that may not offer free Prime shipping.

Tiny has never been a bigger deal.

Insanely small. Tough. Dead simple to use. Connected to your phone. Ready to transform you into a pro-caliber creator. Your followers won’t know what hit ’em.

A bigger mount. What a bright idea.

From camera to your followers in a snap.

Easily transfer photos and videos to your phone via Wi-Fi or Bluetooth and the Nikon SnapBridge app for your Apple or Android-powered phone. Even use your phone as a remote monitor to see what Z 50 sees, adjust camera settings, take pictures and record video.

4.6 out of 5 stars
4.6 out of 5
41 global ratings
How are ratings calculated?
To calculate the overall star rating and percentage breakdown by star, we don’t use a simple average. Instead, our system considers things like how recent a review is and if the reviewer bought the item on Amazon. It also analyzes reviews to verify trustworthiness.

Fastguitars
4.0 out of 5 stars Pro Tool
Reviewed in the United States on November 16, 2019
Verified Purchase
I own the Nikon z50 and the Canon EOS M6 V2.
Many of you will want to know which is best..
Let me talk about them briefly.
The Canon M6V2 is a more evolved camera series as its now many incarnations into the series. The M6V2, is the Flagship now, as it is taking the place of the M5.
Its a nice Camera. Its worth the money. Photos are excellent. The feel of the camera is excellent. The build quality, the AF, the EVF, are all excellent. The screen is very good. Its also a smaller and more compact camera then the Nikon Z50.
I find the photos, as compared to the Nikon, are nearly identical, with the Canon's offering slightly more resolution if you pixel peep. This is the effect of a 30+ Resolution sensor, vs, a 20+.
The only thing i dont like about the Canon M6V2, is that you can't manually adjust the sharpness of the images. You can't do this inside the camera. It will allow you to adjust the saturation, contrast, etc, but you can't adjust the sharpness.

The Nikon Z50 is a fast fun experience. The Jpeg IQ is awesome. The same style of tilting screen is slightly larger then the Canon's. The EVF is excellent. The Kit lens is very sharp. The body of the Nikon Z50 is metal but does not feel expensive. The Nikon has a wonderful front grip. Auto focus is sure and fast. Low Light shooting is very good.
The battery door is horrible. No Spring. The card slot is a bit frustrating to try to use when removing the card.
You CAN adjust the Sharpness of the photos inside the camera.
The photo i posted taken with the Nikon is "P" and pretty much Auto, with +1 Sharpness and +1 Contrast.
The Nikon when set to "center point" focus, captures the entire frame as well as the focal point, better then the Canon.
The Nikon does not allow you to change the focus point using the screen, while you look through the EVF.
Both of these excellent cameras are fine shooters with world class IQ and color rendition, and do not disappoint.

CS Studios
5.0 out of 5 stars The Affordable Mirrorless I've Been Waiting For!
Reviewed in the United States on November 16, 2019
Verified Purchase
The Nikon Z50 has a small compact design. Even with the lens, battery and SD card, it weighs 585g. The electronic viewfinder is very good and has minimal lag. It only has 1 SDXC slot and is UHS-1 speed. It uses MicroUSB instead of Type-C. Overall build quality is great. The camera's selfie mode is very useful for vlog. Low light performance is not bad for a DX (crop) sensor. Price is fair and I recommend it with the 16-50 F3.5-6.3 lens. Lens has VR and camera has electronic VR instead of in body stabilization like the Z6/Z7 series. It supports the FTZ adapter so you can also use your F mount lens. It uses a new EN-EL25 battery so other batteries you may have won't work. The camera's AF points cover most of the image area. The tracking AF is quite good. You can see my full review on youtube. Overall, I am impressed with this camera and can recommend it to anyone wanting to enter the mirrorless market, without breaking the bank.
Read more

Thomas Rawlinson
5.0 out of 5 stars Love Nikons
Reviewed in the United States on January 9, 2020
Verified Purchase
Have owned multiple Nikons over past decades, went mirrorless with the Z6, but like the Z50 just as much. Very compact and fits in a coat pocket with the DX lens. Great for travel, picture quality is first rate.
Read more
4 people found this helpful
Helpful
Comment Report abuse

TakeAPic
1.0 out of 5 stars What a disappointment.
Reviewed in the United States on February 3, 2020
Verified Purchase
Not impressed in the least.
Read more
5 people found this helpful
Helpful
Comment Report abuse

Tom S.
5.0 out of 5 stars Finally! The camera that I've been waiting for !
Reviewed in the United States on December 8, 2019
Wow! The Z50 might be one of the most under-rated cameras that Nikon has ever launched!

Photography is one of my favorite hobbies and I’ve been using Nikon equipment for about the last 7 years. I shoot wildlife using a D500 and the Tamron 150-600 G2 lens, and a recently purchased the Nikon Z6 for landscape and architectural photos. It replaced my trusty D750, which was my first Nikon camera. I was, and still am, happy with both the D500 and the Z6.

My problem has always been what camera system and lenses to take when I’m traveling on vacation, or for casual use. In the past I’ve tried using the small 1 inch sensor-based cameras like the Sony RX100, or Panasonic compacts, but I was always unsatisfied with IQ from these cameras. Now, finally, Nikon has introduced a camera system, the Z50, that is perfect for travel and for casual use. I purchased the two lens package for about $1200, which I now consider a steal! Here are my impressions after using the Z50 for about a week:

1. The ergonomics of the Z50 is fantastic. The weight, the position of the controls, the menu system, and the grip makes this camera a joy to use. If you enjoy the ergonomic and controls of the Nikon cameras in general, you will LOVE shooting with the Z50.

2. The two kit lenses are sharp. Amazingly sharp. I don’t know how Nikon was able to do it but they managed to create two inexpensive, lightweight lenses for the Z50 that can compete with some F mount lenses that are 2 or 3 times the cost and the weight. I’ve attached some recent photos of Mallards that I took as JPEG images (I normally shoot RAW). Images had minimal processing in LR, but were significantly cropped because the 50-250 zoom lens can only go so far! Even with the cropping the images look great, and most are comparable to what I’ve previously taken using my D500 with the Tamron 150-600 lens. Amazing.

3. The image stabilization in both kit lenses (16-50 and 50-250) are significantly better that other F mount lenses that I own. Is it because of the larger Z mount? Not sure, but the result is that I can easily take sharp handheld photos at 1/8 sec with the 16-50 pancake lens, and I can get sharp handheld photos with the 50-250 telephoto at less than1/60 sec. This allows me to shoot at much lower iso values, which might be part of the reason that the photos look so good compared with those from my D500.

4. The videos obtained from the Z50 are comparable to what I get from the Z6. Excellent! Please be aware, however, that if you use any lenses other than the Z mount lenses on this camera, you will pick up noise on your videos from the focusing mechanisms in these other lenses. I tried it and I don’t like it. I don’t consider this to be a negative, however, because the two kit lenses are more than adequate for any videos that I plan to make using the camera.

There seem to be a lot of misconceptions out there concerning the Z50. The Z50 was not meant to be a “pro” camera, and it was not meant to take the place of Pro DSLRs like the D500, or Nikon’s Z6/Z7 series cameras. I also believe that it doesn’t make much sense to use most of the existing F mount lenses with this camera body, even though one can do so using the FTZ adapter. The Z50’s advantage is the extremely low weight of the camera and kit lenses, and adding heavy lenses would change the user experience for the worse. The joy of the using the Z50 is, in large part, due to the lightweight body and lenses.

In summary, there is a LOT TO LIKE about the Z50 and the two kit lenses. If you’re like me and want to stay with the Nikon line because you love Nikon’s ergonomics, controls, and menus, but have always been looking for a lightweight, low cost Nikon camera system (mirrorless, of course) for travel and casual use, that has excellent IQ and is also great for videos, the Z50 is a FANTASTIC choice!

Also, if you are new to cameras (high quality cameras) and have mostly been using your phones or compact cameras, but want to get into photography in a bigger way because you really want higher quality photos, then the Z50 and the 2 kit lenses just may be the right system for you. Canon and Sony also have comparable “intro” level APS-C cameras similar to the Nikon Z50, and choosing either the Canon or Sony lines might also work for you. My recommendation, however, is the Nikon Z50.
Read more

Carlos Morales
5.0 out of 5 stars sturdy, light and powerful... how much can you ask?
Reviewed in the United States on March 17, 2020
Verified Purchase
superb pictures, high quality build, great touch controls, this is a very powerful camera, totally worth it.
Read more
Helpful
Comment Report abuse

Reviewer in NJ
5.0 out of 5 stars Great focus tracking, great responsiveness, fun to use, great pictures.
Reviewed in the United States on November 13, 2019
This camera's focus tracking is excellent. I was able to get some great shots of my dog running full speed. It's a big step up from the older Nikon dslr that I was using. It's quite compact with the kit lens. I bought the adapter and am also using some other Nikon lenses I own. I think you'll want the two-lens kit if you don't have other Nikon zoom lenses. You can find full reviews many places, but I'll just say this camera is a joy to use and the pictures I'm getting are great.
Read more