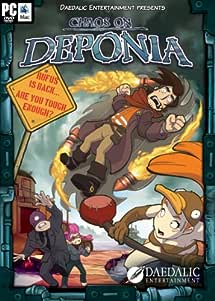 Brand: Daedalic Entertainment
Platform : Windows Vista, Windows 7
| DRM:
3.5 out of 5 stars 5 ratings
Available now.
Ships from and sold by Amazon.com Services LLC.
Note: After purchase, you can access the item in Your Games Library.
By placing your order, you agree to our Terms of Use.
This product is non-returnable and non-refundable.
Note: Currently, this item is available only to customers located in the United States.
Download size: 5 GB
Download time: 13 minutes, 39 seconds on broadband, 8 days, 16 hours, 3 minutes, 2 seconds on dial-up

Whoever loves adventures is bound to love Chaos on Deponia. (Gamereactor, 90%)

Every puzzle, every dialogue, every punch line, every drawn background, every character is infused with a certain charming quirkiness (...). (Eurogamer, 90%)

Chaos on Deponia is the new benchmark challenging every adventure game which will be released in the future. (Gamers, 94%)

Compared to the equally brilliant predecessor, Chaos on Deponia is more complex, longer, more exciting, twisting and turning and a good chunk more hilarious - who would have expected that?! (Gamestar, 90%)

With this long-expected sequel to the critically highly acclaimed and lavishly praised Deponia, the player enters round two. Chaos on Deponia turns out to be even wackier than its predecessor and instantly puts the player under its spell.

After the events on Deponia, it seems that Rufus came to his senses. He's grown prudent, amicable, kind and caring, without any intention to cause major mayhem just to further his own selfish ends. It seems he is far from chaining himself to flaming saw blades, training torpedo-dolphins or foraging through platypus nests. Or is he?

Ultimately it's a flaming saw blade grounding Goal on Deponia again. By accident, her consciousness gets split into three parts and stored to three different discs.

Now it's on Rufus once again to convince all three parts of Goal, utilizing his remarkable charming wits, to become one again, venture to Eylsium with her and save Deponia from certain doom while he's at it.

3.5 out of 5 stars
3.5 out of 5
5 global ratings
How are ratings calculated?
To calculate the overall star rating and percentage breakdown by star, we don’t use a simple average. Instead, our system considers things like how recent a review is and if the reviewer bought the item on Amazon. It also analyzes reviews to verify trustworthiness.
Top reviews

Shawn Candela
2.0 out of 5 stars More frustrating than fun
Reviewed in the United States on January 27, 2014
Verified Purchase
The graphics are great, but it can be tiring to keep clicking on things in he hopes that something will make sense.
Read more
2 people found this helpful
Helpful
Comment Report abuse

Kendance
2.0 out of 5 stars Platypus Bataka ruins the game
Reviewed in the United States on March 1, 2013
Verified Purchase
The game in general is ok but the Platypus Bataka fight isn't a puzzle but a fight with poles which I found extremly difficult to win and it ruined the game for me.
Read more
5 people found this helpful
Helpful
Comment Report abuse

MianTech
5.0 out of 5 stars Best point click game
Reviewed in the United States on November 30, 2013
This game is super fun...puzzles are easy to solve.
ignore the other review, he doesn't know the game well, everything is a puzzle you just need to figure it out
Read more
4 people found this helpful
Helpful
Comment Report abuse
See all reviews
Pages with related products. See and discover other items: computer animation software