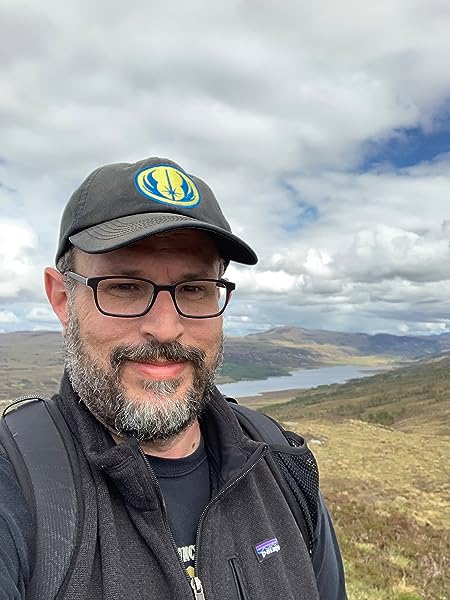 The Daedalus Incident: Book One of the Daedalus Series Paperback – August 13, 2013

"Martinez's debut is a triumph of genre-blending.... With a cast of superbly drawn characters, Martinez's title is a mesmerizing tale of two universes that briefly cross paths, leaving both worlds forever changed." -- Library Journal (starred review, SF/F Debut of the Month

"The HMS Daedalus sails a ballsy, brilliant and at times breathtaking universe and you get to tag along for the ride. I can't speak highly enough of what the author has created here" -- Fantasy Faction

"...a story that is plain good fun and adventure and that does not get bogged down into complexities of the world. A highly recommended debut." -- The Founding Fields

"This is a fast-paced and smooth read from the very beginning, and towards the end Martinez builds up the suspense and urgency like a pro....adventurous, original, and a blast to read." -- Tor.com

"...an ambitious and fun romp...entertaining and fun to read and despite its delays in publication, I hope it reaches its deserved audience, and that the author has the opportunity to explore the universe of the Daedalus, especially, much further." -- SFSignal

Michael J Martinez: After nearly 20 years of writing other peoples’ stories as a journalist and professional writer, including stints at ABCNEWS.com and The Associated Press, Michael J. Martinez decided he’d try his hand at telling his own tales. So far, it’s worked out better than he thought.
Start reading on your Kindle in under a minute.

3.9 out of 5 stars
3.9 out of 5
99 customer ratings
How does Amazon calculate star ratings?
Amazon calculates a product’s star ratings based on a machine learned model instead of a raw data average. The model takes into account factors including the age of a rating, whether the ratings are from verified purchasers, and factors that establish reviewer trustworthiness.
Top reviews

A.C.
5.0 out of 5 stars There Be Sailing Ships in Space
Reviewed in the United States on July 6, 2013
Verified Purchase
When I first learned that "The Daedalus Incident" somehow involves 18th century sailing ships in space, I proceeded with caution. It is such a preposterous notion but I decided to go along with it because it touched something primal in my mind. It is a vision that probably visited the imagination of every child who has seen the closing scene of the classic Disney Peter Pan movie or who secretly played with their father's sailing ship models pretending these could fly because they had better not try floating it in the bathtub. Heck, Columbus, probably daydreamed of sailing his carracks to the moon and beyond but shied from writing those thoughts down (Perhaps he did. Someone correct me here).

The author braved writing those thoughts down in this book. He created a world of spacefaring 32-gun frigates and wrapped it around a fast-paced adventure story. "The Daedalus Incident" treads the borders of science fiction, fantasy, mystery, and historical fiction. It throws in some romance, too, for good measure (it could easily have had a cover featuring a swashbuckler and a damsel in distress but, thankfully, it did not go there). Reading it felt like watching someone juggle knives while riding a unicycle on a tightrope over a flaming pit. There is always the danger of the whole thing falling apart but, incredibly, the act holds well together. I think that's how most of the excitement in "Daedalus" is generated making it so fun to read.

The author has taken great care in crafting the details of his world. He demonstrates respect for every genre he touched in the story so you soon realize he knows what he's doing. You can safely suspend your disbelief while reading this tale and enjoy the sights, sounds, and marvels of the ride knowing you won't be cheated in the end. Don't be surprised if you find yourself asking for more. Thankfully, there is promise of that.

philnc
5.0 out of 5 stars Not your father's scifi
Reviewed in the United States on August 19, 2013
Verified Purchase
The Daedalus Incident is in many ways an echo of earlier scifi stories. Only better. Alternate realities colliding is the background for Philip K. Dick's "Man in the High Castle", but we only see those two worlds come together in very brief snapshots. In this book the collision is more sustained, enough to allow the characters in each universe interact, and finally fight, together. As someone who has been reading scifi for over 40 years, I've seen my share of novel ideas brought to life by authors. Joe Haldeman taking Heinlein's starship troopers to the next level by finally learning to love time dilation, John Scalzo branching off from Haldeman in going all genetic on us with his old men (people).

I have to admit to being put off by the first few chapters that take place in the universe that isn't our own (you know, the one where the Americas never existed and pre-Victorian Europe discovers space travel instead). But the further on I read the more engaged I became, until finally I came to find that other universe just as, if not more, interesting because the author had succeeded in getting me to suspend my disbelief just long enough that I started to care about that somewhat odd reality with its even odder characters. I am sure this book would make a terrific movie, so long as they could get someone credible like Ridley Scott to do it (Scott did a fairly good job on his visualization of Philip Dick's android novel, after all). No doubt a lot of people are going to vehemently disagree with me. This author took a real risk with this book's story line. For me that risk paid off. My only closing comment to people who are considering reading this book is, just give it a chance. You may find yourself grateful for the author's courage in taking the leap that he does here. You might even start hoping he'll write a sequel.

fastreader
5.0 out of 5 stars A swash buckelling space opera taking place in 1779 and 2132. MARS. Highly entertaining
Reviewed in the United States on October 1, 2013
Verified Purchase
Martinez has managed to blend the swash buckling ways of 1779 and the hard science and action of working on Mars in 2132 that makes both relavent.

And in fact this great mash up of time lines results in the collision of these two time lines in the exciting conclusion to the story.

In 1779 we have the almost "steampunk" like activity of sailing between the stars with a literal sea going ship. This is accomplished through lodestones that have been treated by an Alchemist to support the gravity and air needed by men. And by men, I mean sailors of the Royal Navy no less. Our hero is Tom Weatherby on her majesties ship Daedalus who is on a routine voyage to rout out any French ships.

Tom and the rest of the men on Daedalus are soon on a trip across the known worlds chasing a mad alchemist who is stealing the essence of the known worlds. Why he is doing this is not known. All that is known is that he must be stopped before he gets all the known worlds essences.

In our 2132 timeline on Mars our main characters are US Air Force personnel and scientists exploring Mars along with a group of rough necks mining for precious materials under the surface of Mars.

But something is wrong as there are injuries involved when several earth quakes (oops mars quakes) occur with no apparent reason. Soon both the military staff and scientists are investigating other strange occurrences.

As you may have guessed the two time lines collide at the end of the book with an epic battle; and both groups of characters being exposed to the other's perspective.

A wonderful romp that combines both science fiction and fantasy attributes that will please both groups.

Ed.F
5.0 out of 5 stars Enjoyable stuff.
Reviewed in the United Kingdom on December 12, 2014
Verified Purchase
I really rather enjoyed this, an interesting concept executed with verve and some panache. Nice and pacey narrative if a bit corny but no worse for that. Mixture of Hornblower, Tom Clancy and Edgar Rice Burroughs with a splash of Patrick O'Brian too.
Read more
One person found this helpful
Helpful
Sending feedback...
Thank you for your feedback.
Sorry, we failed to record your vote. Please try again
Report abuse

Sandra Wallace
4.0 out of 5 stars The Daedalus series Book 1
Reviewed in Australia on December 12, 2018
Verified Purchase
Star faring civilisations, future and ancient collide in a wonderful Sci Fi and Steampunk way. Ever the Daedalus. Love it.
Read more
Helpful
Sending feedback...
Thank you for your feedback.
Sorry, we failed to record your vote. Please try again
Report abuse

G Sigmundson
5.0 out of 5 stars Great stuff.
Reviewed in Canada on June 27, 2014
Verified Purchase
Well worth the read. Keeps you guessing.
Read more
Helpful
Sending feedback...
Thank you for your feedback.
Sorry, we failed to record your vote. Please try again
Report abuse

Michael McLeod
5.0 out of 5 stars hey, this is a great reading adventure
Reviewed in Canada on November 6, 2013
Verified Purchase
I really enjoyed reading this book, and I highly recommend it. Once I started reading it, I could not stop until I finished it. A very entertaining read with well developed characters.
Read more
One person found this helpful
Helpful
Sending feedback...
Thank you for your feedback.
Sorry, we failed to record your vote. Please try again
Report abuse
Load more international reviews

André
3.0 out of 5 stars SciFi meets Alchemypunk; Light on the Sci-part, though
Reviewed in Germany on October 25, 2015
Verified Purchase
Enjoyable read, that chronicles the convergence of two plots from two wildly different universes - alchemically driven Royal Navy solar sailing and near-future corporate Mars exploration.
The authors attempts at science are rather feeble, though, so if you are into hard scifi, this book will have jarring nonsequiturs on every other page of the Mars part. The writing itself is reasonably competent, yet the plot, especially the finale - needs work.
Read more
Helpful
Sending feedback...
Thank you for your feedback.
Sorry, we failed to record your vote. Please try again
Report abuse

Page 1 of 1 Start overPage 1 of 1
This shopping feature will continue to load items when the Enter key is pressed. In order to navigate out of this carousel please use your heading shortcut key to navigate to the next or previous heading.
Back
Next
Pages with related products. See and discover other items: steampunk novels