Usagi Yojimbo Volume 9: Daisho and millions of other books are available for Amazon Kindle. Learn more
Share
Have one to sell?
Sell on Amazon 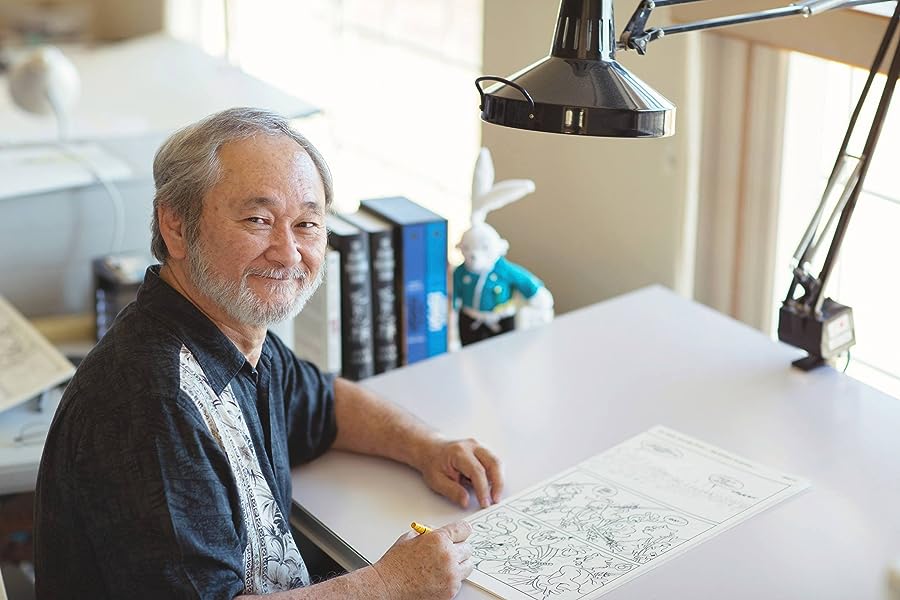 Start reading Usagi Yojimbo Volume 9: Daisho on your Kindle in under a minute.

Sophia
5.0 out of 5 stars in love
Reviewed in the United States on February 8, 2014
Verified Purchase
I'm very sattisfied with this book. It is a fairly lengthy comic which is great but when I'm doen with the book it makes me want moreee
Read more
Helpful
Report abuse

E
5.0 out of 5 stars Awesome Fictional Kemono!!!!!
Reviewed in the United States on April 10, 2006
"Kemono" (literally meaning "beast") is a genre of ancient Japanese art (more so paintings) that featured animal or animal-esque characters in human-like settings. If you're a fan of manga and anime (as am I), then you know that anthropomorphism runs heavily through manga and anime (e.g. Studio Ghibli's Porco Rosso, My Neighbor Totoro, The Cat Returns, etc.). Created by Stan Sakai, Usagi Yojimbo (literally "rabbit bodyguard") continue the tradition of anthropomorphic kemono in the form of a manga.

This TPB (trade paperback), 'Book 9: Daisho', (daisho referring to a twin pair of Japanese blades) collects a portion of the independent Mirage Studio's 16-issue run, beginning with issue #7, of the series which ran from 1993 to 1996. Actually, Mirage's 16-issue run is Volume 2 of the Usagi Yojimbo series, as another independent Fantagraphics published the ealier first volume (1987-1993). (Currently, Dark Horse has taken over publishing the series and is 92 issues strong to date.)

In it's run at Fantagraphics, I'm unsure as to whether or not the series was in color or in B&W (black and white); the current Dark Horse published series is indeed in B&W. However, Mirage Studio's run of the series printed the comics in color, which is a stark contrast to the fact that most independent publishers print their comics in the B&W format.

Personally, I favor color over B&W. For you die-hard comic purists out there who scoff at me for favoring color as opposed to B&W, so be it: There are some good B&W comics, but to be honest, sometimes it's just too hard to visually decipher what's going on with all the line work and penciling going on.

My first brush with Usagi was during the late 80s when the first cartoon series of the Teenage Mutant Ninja Turtles (TMNT henceforth) appeared on the early Saturday morning cartoons block (I still have Usagi's and the turtles action figures!). Recently, I learned that this appearance of Usagi in the Ninja Turtles cartoon series may have been a result of the turtles' appearances in various Usagi comics from the first run when published through Fantagraphics.

The story arc presented in this TPB collection is what really thrusted my interest full-throttle into Stan Sakai's awesome character. The stories spanning issues 10-12 focus on the notion that an evil general has stolen Usagi's daisho, "the soul of the warrior", and he's on a mission to get them back.

The action is nonstop, runs at a steady pace, and thrusts your imagination deep into the early 17th century of Edo Japan. On top of that, Usagi is a no nonsense ronin ("masterless samurai") who exudes bravery, honesty, and courage in his upright demeanor. The aforementioned qualities may have been gleaned from the Bushido code of ethics for historical samurai. On top of that, this is historical fiction at its finest: the wardrobes, sceneries, buildings, etc., are drawn to the faithfulness of Edo period Japan, so much to the point that the series was once awarded a Parent's Choice Award due to the comic's educational value.

Although you don't have to be a learned "grasshopper" in the ways of the Japanese warrior to enjoy the series, I think it is helpful to understand some of the history behind what happens in the stories as well as brushing up on some Japanese terms, like daisho, katana, san, etc. Other than that...pick up a copy of this forgotten gem of a TPB! And you get TONS of Usagi Yojimbo stories in this phat collection!

This volume of Usagi Yojimbo adventures (reprinting Mirage Comics' Usagi Yojimbo, v.II, issues 7-14) centers around a grim, taut story worthy of the Toshiro Mifune canon, in which Usagi is taken captive by bandits while attempting to free a village from a group of bandits, and loses his swords to the group's malevolent leader. There follows a nice interlude in which Sakai delves into the craftsmanship of Japanese swordmaking, then it's back to the action, as Usagi searches for revenge. Rounding out the volume is a flashback story in which a young Usagi, still in the service of his lord, finds and loses love. All in all, another excellent collection of Stan Sakai in his prime. (DJ Joe Sixpack, ReadThatAgain book reviews)
Read more
Helpful
Report abuse

shaxper
3.0 out of 5 stars Growing Pains
Reviewed in the United States on June 15, 2008
Usagi Yojimbo is the kind of quality work that transcends time, genres, demographics, and even age groups. It crafts a delicate and beautiful balance between honor and savagery, cute innocence and dark brutality, simple heart-warming stories and multi-part epics that shape a dense continuity. Whether or not you've ever been a fan of feudal Japanese culture, furry anthro characters, or independent, non-superhero comics, Usagi Yojimbo is a comic that can't help but impress even the harshest critic.

Volume 9 records a unique period in Usagi's publishing history where the series has already come a long way from where it started, yet seems entirely unsure of where to go to next. We're given a generous heaping of Usagi stand alone stories, all of which are entertaining, but feel a bit tired and run of the mill by this point. We're also given two new characters, Stray Dog and Inazuma, both of whom seemed like great character concepts, but neither of which really manage to come to life on the page in the same way that so many previous Usagi characters had. Inazuma ultimately becomes a very important character down the line, but little of that can be glimpsed in her first appearance here. Stray Dog hangs around the title for quite a long time after this, but he never really manages to cast a compelling shadow.

The heart of this volume is the "Slayers/Daisho" storyline in which Usagi essentially gets tortured, issue after issue. Creator Stan Sakai had found wonderful success in making Usagi more human and fallible in the "Circles" storyline, but he takes that farther and, perhaps, too literally here. Usagi gets defeated by a seemingly unimpressive band of brigands. They imprison him, torture him, nearly kill him, and then run off with his swords (Daisho). This last offense is the ultimate injury to Usagi as the Daisho are the physical manifestation of honor and soul in a samurai. Essentially, this storyline just plain hurts. No one wants to see their beloved character undergo that much suffering, especially when it isn't even at the hands of an established or worthwhile rival. To this day, I consider "Slavers/Daisho" to be the most upsetting Usagi storyline ever written.

All in all, I have little love for this volume. It's still worth reading for the stand alone stories (and I believe the 3 part "Battlefield" storyline starring young Usagi is in this volume. Definitely worth reading), but the real center of this volume just plain hurts. Loyal fans of Usagi will still want to see the first appearances of Stray Dog and Inazuma, and the Daisho storyline does include a brief history of Usagi's weapons that is definitely worth reading. It's not that "Slavers/Daisho" is a poorly executed storyline. I just found the whole concept disappointing.
Read more
Helpful
Report abuse

Seth T. Hahne
5.0 out of 5 stars As per usual, Sakai breathes life into his graven rabbit
Reviewed in the United States on January 21, 2000
Stan Sakai's story-telling ability once again surfaces to shine bright above the churning mess of mediocrity and narrative detritus the comics industry so often produces - this should come as no surprise to those who have kept up with the lapine ronin's "warrior's pilgrimage." Sakai's talent becomes wildly apparent when, after chronicling the salvation of a farming village from their slaver captors which resulting in the theft of Miyamoto Usagi's daisho (two-swords), he embarks upon a seven-page digression into the cultural import of the samurai's blades and then leaps marvelously back into manic high-action. My only regret is that there are only so many of his books available (fourteen by March 2000)!
Read more
5 people found this helpful
Helpful
Report abuse
See all reviews

Me
5.0 out of 5 stars Brilliant
Reviewed in the United Kingdom on January 20, 2014
Verified Purchase
Another Brilliant book by Stan Sakai. He is on top form with Usagi Yojimbo - Dashio, a fine addition to my collection
Read more
Report abuse
See all reviews