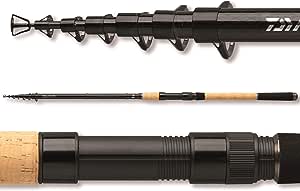 Daiwa Megaforce Telescopic allround Fishingrod. The Megaforce telescopic rods now feature a reworked design, improved components and additional models. The rods with lengths of 5.90 Feet to 9.8 and casting weights of 0.25-0.90 ounce to 2.50-5.30 ounce are now available at a very short closed length of only 27.16 inch. Perfect, when the rod is transported in a backpack or travel bag. The models with 10.80 Feet length and above feature a somewhat longer closed length and display actions, which resemble the bending curves of detachable rods. The lightweight and wellbalanced carbon fiber blanks care for an outstanding action at the fight and at casting. The lightweight and premium titanium oxide guides with improved inlays additionally support the quick resilience of these rods. Available at an outstanding priceperformance ratio, this range offers the proper rod for nearly every field of application. HMC+ carbon fiber blank, High-quality cork / EVA handle, Titanium oxide guides.

4.2 out of 5 stars
4.2 out of 5
110 global ratings
How are ratings calculated?
To calculate the overall star rating and percentage breakdown by star, we don’t use a simple average. Instead, our system considers things like how recent a review is and if the reviewer bought the item on Amazon. It also analyzes reviews to verify trustworthiness.

Amazon Customer
1.0 out of 5 stars Rod will break!
Reviewed in the United States on June 13, 2020
Size: 7.87 FeetStyle Name: Castingweight: 0.70-2.10ozVerified Purchase
I went to collapse the rod and when I barley twisted it it delaminates and broke. Thought was a nice quality product, but in reality is garbage. A waste of 60$
Read more

Zafer Aktan
4.0 out of 5 stars Nice, quality, pricey telescopic rod for surf
Reviewed in the United States on February 18, 2020
Size: 11.81 FeetStyle Name: Castingweight: 3.52-10.58ozVerified Purchase
Very light and compact for a 12 foot telescopic rod, high quality. It is pricey in US compared to how much they sell the same rod in Europe. I guess that is the shipping cost embedded in the cost. Daiwa quality. Fast action tip doesn't seem to be medium not heavy, hard to believe can cast 10 oz , we will see...
Read more
4 people found this helpful
Helpful
Comment Report abuse

Eric M. Spletzer
2.0 out of 5 stars Not enough guides to be a serious telescopic rod at light weights.
Reviewed in the United States on November 8, 2020
Size: 6.89 FeetStyle Name: Castingweight: 0.25-0.88ozVerified Purchase
My first Megaforce broke after about an hour. Now granted - I have two, a 210LS, the 6.9 ft light cast weight version, which is the one that broke, and a 7.9 foot heavier cast weight. I have not used the latter, but I fear it will suffer the same problem.

I've been fishing almost exclusively on telescoping rods, and they're a tricky bunch. I think the Megaforce is an outdated technology, to be quite frank. It's light years beyond that of the Eagle Claw, the Plussino and the Sougayilang, all of which are stiff as boards, and the Zebco, which is a wet noodle. The Kastking Blackhawk II is a better rod to be sure, I think because it has more guides and a few floating guides at that, as well as a lot of weight/action combos. But my Kastking broke within 3 weeks too, because the guides were not that well built and basically abraded the tip, which though responsive, was flimsy and eventually exploded.

The problem with the Megaforce 6.9' rod is that even though the rods are light and responsive, there are far to few guides, and the construction of these guides with collared rings leads to stress concentrations. There are 5 guides, one for each section when for a 7' rod, there should be 9, like there are on the Kastking or the higher end telescopics like the Daiwa Blazon Mobile, the Triple B and the Abu Garcia Trout Marquis. I think the configuration of the Megaforce may find it's sweet spot in the larger rods with more sections and more guides, but on the light and short end of the line, it's far too few. With 6 pound test, I loaded up the rod over on a snag I thought was a fish, the rod doubled over, but with only 5 sections, that's more than 30 degrees bend that gets concentrated on each of those collars, and sure enough, one of the sections snapped right at the ring. I worry that my 7.9 footer will do the same because it's made the same way, only thicker. If the longitudinal geometry is the problem, it's not significantly changed on the 7.9 footer.

Meanwhile the Daiwa Ninja seems to have the same configuration. I've not tried this one, but I won't bother. The Blazon Mobile Baitcaster seems to be the first in the Daiwa telescopics, at about a $120 price point on that other auction site, that really gets the sensitivity and strength. It's a 6'10 rod, 8 guides, and uses wrapped carbon fiber collars, and the same carbon rod tube tech the Tenkara rods use for the tips. That makes a huge difference. I've pulled in a handful of 4 and 5 pound bass with it in the last month and haven't questioned the rods strength yet.

The Blazon, the Triple B and the Abu Garcia all use a rubber seat for their floating guides, and this protects the rod shafts. I haven't ponied up for anything beyond the Blazon yet, but the Abu Garcia Trout Marquis seems to be the pinnacle of telescopic tech at it's lightest, but with a price tag to match. Youtube reviews from Japan and Singapore seem to the the Triple B is the gold standard. My dilemma now is which of these three to replace my Megaforce with?... I broke the rod today and tomorrow does happen to be my birthday. Just sayin'....

LaszloK
5.0 out of 5 stars Sturdy 7.87 rod
Reviewed in the United States on August 20, 2020
Size: 7.87 FeetStyle Name: Castingweight: 0.25-0.88ozVerified Purchase
Caught multiple 20lbs+ fish no problems what so ever. my 1st choice in tight places, all my old 1 or 2 pc rods now just collecting dust. folks complaining about braking it in half they don't know how to handle a telescopic rod. no rod meant to lift a large fish out of the water. don't pinch/shear with fingers while collapsing the rod
Read more
2 people found this helpful
Helpful
Comment Report abuse

anon
1.0 out of 5 stars NOT AUTHORIZED FOR SALE IN THE U.S.
Reviewed in the United States on November 4, 2020
Size: 7.87 FeetStyle Name: Castingweight: 0.70-2.10ozVerified Purchase
Buyer beware. This model is not authorized for sale in the U.S. and DAIWA USA will not offer product support or accept warranty claims. I purchased this rod and it snapped a month after the return window closed. I was unable to reach the seller, PESCADERO. I packaged the item up and paid to ship it to CA where the DAIWA USA warranty claims office is. Upon processing of the claim they informed me that this model is only authorized for sale in the French and U.K. markets and unfortunately, DAIWA USA can do nothing. You can verify this yourself by doing a product search on DAIWA USA's website. The representative informed me that if you do not see your exact SKU on their site, it is not eligible for warranty or support in the U.S.
Read more
Helpful
Comment Report abuse

Adam W.
1.0 out of 5 stars BAD Experience
Reviewed in the United States on June 24, 2020
Size: 9.84 FeetStyle Name: Castingweight: 2.47-5.29ozVerified Purchase
Every worked perfect on this pole until, I only caught 1 redfish on this pole it was 20 lbs. Then I went to cast and I was only using a 2.5oz weight and shrimp. And SNAP the pole broke right above the first eye. I dont know it was just a manufacturing error or during shipping, or traveling. But I had the pole in a traveling case. I threw the pole away right there on the beach. This was my first experience with a telescopic rod....and not a good one
Read more
3 people found this helpful
Helpful
Comment Report abuse

CP
4.0 out of 5 stars Great rod
Reviewed in the United States on July 26, 2020
Size: 8.86 FeetStyle Name: Castingweight: 1.41-3.17ozVerified Purchase
It was my first day to use this rod. It was great! I got one small fluke with it. Actually i expected M power, but it looks like MH.
I love it.
Read more

Charles
5.0 out of 5 stars Hard to believe that its a collapsable pole
Reviewed in the United States on January 2, 2020
Size: 11.81 FeetStyle Name: Castingweight: 3.52-10.58ozVerified Purchase
Brought it with me to BElize, caught several bone fish, absolutly love this poles action.
Read more
3 people found this helpful
Helpful
Comment Report abuse
See all reviews

MR C M Montanez
1.0 out of 5 stars Less than expected
Reviewed in the United Kingdom on July 7, 2020
Size: 9.84 FeetStyle Name: Castingweight: 2.47-5.29ozVerified Purchase
I have a total of 20 fishing rods and I am a fan of Daiwa. However, this rod has not impressed me at all.
For the money paid, I was expecting more quality than the one I observed.
Not recommended.
Update: after a long fishing session, the tip of the rod was badly damaged during fighting a carp. It seems to me that there was already a fault or some kind of pre-existing defect as the "fibers" started to separate from the rod until it got broken. Defintely not recommended.
Read more
2 people found this helpful
Report abuse