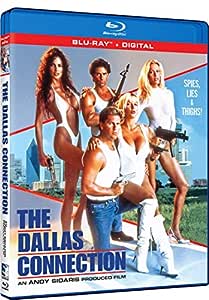 Esteemed scientists in charge of a sophisticated, state-of-the-art, satellite weapon-tracking system are being assassinated before a major scientific convention in Dallas.

Its a Sidaris film so you know that, inevitably, everyones going to end up in the bayous, blowing stuff up. --Lisa Marie Bowman, Through the Shattered Lens

Ferdo
4.0 out of 5 stars Trash movie in a good way
Reviewed in the United States on June 3, 2019
Verified Purchase
Trashy movie that is just what it was supposed to be.

It isn’t gone with the wind..

Joseph Eleazar
5.0 out of 5 stars Look new
Reviewed in the United States on May 23, 2020
Verified Purchase
I got the movie in my house today
Read more
One person found this helpful
Helpful
Comment Report abuse

Amazon Customer
3.0 out of 5 stars Gorgeous girls and funny in the wrong places.
Reviewed in the United States on May 9, 2002
Verified Purchase
If you've seen this kind of film before, you're going to get exactly the same thing. Lots of very nice, busty girls (Julie Smith - wow!) take their clothes off for no reason, other than it makes guys happy. There are some pretty buff guys for the girls and some bad acting for everyone. And I mean VERY bad.
Overall, this isn't a bad film - no shocks, no surprises and you can see the twists coming a mile away. Odd little bits in the film made me laugh; people getting the use of the words anagram and acronym mixed up and foliage being pronounced "foilage". Thank goodness there were no libraries, nuclear reactions and nothing happened in February.
If you want something Pacino, De Niro or James Woods would appear in, steer well clear of this. If you want a Friday night film to have a few beers with - you could do a lot worse. Once again: Julie Smith - WOW!

walterblow i love other movie to & horror & monster action westerns
5.0 out of 5 stars i love it
Reviewed in the United States on January 3, 2019
Verified Purchase
i love julie strain & all the action
Read more
One person found this helpful
Helpful
Comment Report abuse

B&S About Movies
TOP 1000 REVIEWER
3.0 out of 5 stars More Julie Strain! More Sidaris!
Reviewed in the United States on May 17, 2019
This is the second of the L.E.T.H.A.L. Ladies films that were directed by Drew Sidaris, with help from his father and mother in production. This time, there's a big scientific convention in Dallas, but the scientists in charge of a sophisticated, state-of-the-art, satellite weapon-tracking system are being killed off.

Bruce Penhall is Chris Cannon again with Mark Barriere returning as Mark Austin. Julie Strain - Black Widow - and Rodrigo Obregon - Antonio Morales - are also back as the bad guys. Samantha Phillips joins the team as Samantha Maxx. You may remember her as Alchemy in Phantasm 2. Plus, there's also Julie K. Smith (one of four girls to do both Playboy and Penthouse and yes, I can tell you that Alexandria Karlsen, Linn Thomas and Victoria Zdrok are the others) as Cobra, Wendy Hamilton as Scorpion (December 1991 Playboy Playmate of the Month) and Gerald Okamura as Fu.

The International World Arms Removal project is a satellite system which has the ability to detect any weapons, no matter their size and even under the most difficult weather conditions. Soon, Black Widow and her troops are trying to take out all of the scientists, who are under the protection of Agent Maxx.

This is the only film in the Sidaris universe where the agents work for I/WAR (International/World Arms Removal), but late in the film, it's revealed that Strain's character works for L.E.T.H.A.L.

Look, any movie that starts with Julie Strain tying a dude up and riding him reverse cowgirl until she kills him isn't going to be all bad. This one has more actual sex scenes than the films of the elder Sidaris, but perhaps that's what people wanted as we moved into the 1990's.

Robert I. HedgesTop Contributor: Pets
HALL OF FAMETOP 1000 REVIEWER
2.0 out of 5 stars Loads Of Stock Footage And An Inflatable Vandermeer!
Reviewed in the United States on August 2, 2016
"The Dallas Connection" is a typical family-style Sidaris film, with Andy's son Drew directing. This one involves a convoluted plot with evildoers targeting scientists with an array of cheap special effects...I mean deadly weapons. The film opens in Paris where famous scientist Jean Pierre (Alan Krier) is pursued by the wicked Black Widow (Julie Strain), who lives up to her code name and kills him in the end, assisted by a character named Platter Puss (Cassidy Phillips). Get it? Platypus. Sigh. Obviously the animal as code name gag is going to be central here, and it is. After the Parisian junket, we snap across the world to South Africa where Cobra (Julie K Smith, easily the prettiest woman in any of this vintage Sidaris film), blows up the car of another famous scientist, Peter Vandermeer (William Fain). I was amused by the wildlife stock footage, especially the lions and rhinos. More stock footage, this time of junks floating in Hong Kong harbor, lets us know the location is still not Dallas. In Hong Kong two Chinese scientists with perfect American accents play golf with the beautiful Scorpion (Wendy Hamilton), until interrupted by the old exploding golf ball ploy. After some backstory ostensibly set in Washington, DC, we find that this all concerns the Lacrosse Satellite, a top secret radar satellite that cannot fall into the wrong hands.

Everyone finally converges on Dallas and gets connected. Morales (Rodrigo Obregon, who turns in the best performance here) is a computer chip expert and his life is being guarded with great care, but is he good or evil? Only time will tell, although the plot gets so insanely twisted that little is certain here. The best way to handle this situation is to give four agents a different computer chip in a necklace to wear, because...well, just because. Do not try to make too much sense of any of this, as there are Jacuzzi scenes to see, along with pointless distractions like horse racing and a really bad scene of dessert consumption. This one features some truly appalling dialogue (e.g. "I'd like to suck the polish off your toes!") and an extremely confusing attempt at explaining the story concisely with some revisionist history; the film concludes somewhat ambiguously after treachery, romances, and double-crosses. Here like in the awful "Enemy Gold" (also helmed by Drew) Bruce Penhall as Chris Cannon grounds the cast, while Julie Strain is still over the top, and occasionally painful to watch. Still, I'm glad Cobra is on the case, and while this doesn't rival Andy SIdaris' best works, it does show an improving trend for Drew. I like to see younger filmmaker's work, and this installment in the Sidaris genre may be bafflingly confusing, but let's be honest: nobody came here to count the holes in the plot.
Read more
One person found this helpful
Helpful
Comment Report abuse
See all reviews from the United States