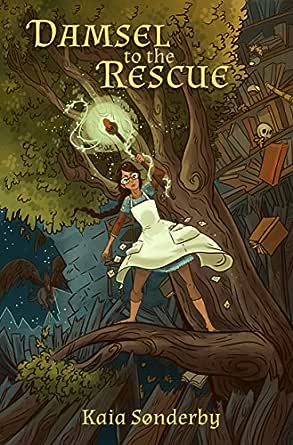 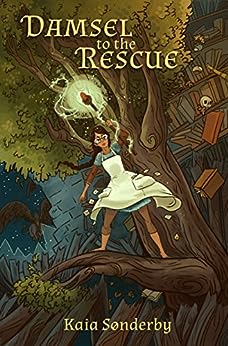 Damsel to the Rescue (The Darkhorse Saga Book 1) Kindle Edition

4.1 out of 5 stars
4.1 out of 5
15 global ratings
How are ratings calculated?
To calculate the overall star rating and percentage breakdown by star, we don’t use a simple average. Instead, our system considers things like how recent a review is and if the reviewer bought the item on Amazon. It also analyzes reviews to verify trustworthiness.
Top reviews

Lov2laf
3.0 out of 5 stars Okay read...
Reviewed in the United States on June 15, 2018
Verified Purchase
After finishing this book I thought it was okay. I've read the author's "Xander Corelel" series and completely loved and was blown away by that. If you haven't read that series, then do. This tale, though ambitious, didn't have the same appeal for me for a few reasons.

I'll add the disclaimer that I read this book over several weeks instead of a couple of days so I think that took some of the punch from the read.

What "Damsel to the Rescue" offers is a fantasy adventure story that swaps gender roles and challenges the status quo. In this world, girls are the active heroes sent out to rescue princes while princes' only role is to exist to be saved by damsels. It's an interesting premise, for sure.

The story has a lot of imagination and each chapter basically drops the lead, Terri, into the the thick of things. She ends up traveling with a motley crew of other damsels she is in competition with, a sidekick, and an ornery horse. It takes a bit to get started but once the adventure aspect of the story kicks in the pacing of the book remains consistent throughout.

Terri is a reluctant damsel who'd rather be anything but and has a cantankerous, introverted personality. Her sarcasm and banter with others and hearing her internal thoughts offers some humorous lines in the story and being a curmudgeon is fine. But, because she's in a bad mood so often, Terri is a really hard character to warm up to. That ultimately knocked down some of my enjoyment. Her character grows a lot in the book to have affection for others but she wasn't my favorite person for much of the read.

I did like, though, that Terri was not beautiful or perfect in body. She wore glasses and was a normal girl.

I was a bit confused as to what demographic the story was aimed at. Due to the ages of the characters (late teens) and a "Wizard of Oz" type feel it seems to be a younger YA novel. However, mild swearing occurs fairly often and there is off page sexual content that feels like it should be for an older audience. If it's for young girls who want to read about strong female leads, some of that impact is taken away because a point of view of the plot is from an active male character. Not that having a male pov is bad but it made me scratch my head in this case.

The overall message of the story is to be who you are and to buck expectations placed on you if it overrides your personal happiness. This applies to all regardless of gender and each person has their own value to offer. Based on that, I can get why there's a female pov and a male pov.

It's also a bit strange that nearly every damsel was made to be in an m/f couple by the end of the story. Again, I wasn't sure what tone the author was going for. I would think it would have a flavor of independence and "not needing a man" kind of thing but the story doesn't go that way. Yeah, the ladies choose the guys they want but I personally would've liked if most of them remained single and/or ended up in f/f, m/m pairings to shake up the stereotype some.

That's another item of confusion. I was thrown a bit because the title infers it's about one damsel. It's not. But, as far as damsels go we do only get Terri's point of view in the story, not the rest of the damsels.

Overall, it's a decent tale. If you like somewhat tame fantasy adventure you may enjoy this. 3.5 stars.

The Knights Who Say Book
3.0 out of 5 stars Not angry, just disappointed
Reviewed in the United States on May 14, 2019
Verified Purchase
This book disappointed me, but I don't want to be too harsh because I did like a lot of it in theory and a few things in practice. Mostly it just isn't as well-written and polished as the author's other series, Failure to Communicate (which I love).

It started out very clever and quite funny and I was totally sure I was going to love it, but by the end I was just bored. All the things that should have worked for me in theory — a group of girls on a fantasy adventure, a prickly protagonist, plot twists — just felt like they were dragging on. The writing was just kind of amateur. The author clearly improved by leaps and bounds between this book and her next one.
Read more
Helpful
Comment Report abuse

s
5.0 out of 5 stars A really fun read.
Reviewed in the United States on January 11, 2016
Verified Purchase
This book was a blast to read. I felt like I was reading 'YA fiction for people who don't usually like YA fiction'. I ended up devouring this thing in a few days, despite my busy schedule.

Damsel in Distress stars the reluctant heroine, Terri, who comes from a long (and famous) line of damsels, a faction of women whose job is to rescue captured princes and fight various adversaries. Terri, a plant mage, wishes only to be a gardener, and wants no part in any damsel business, however, when her mother bribes her with an estate that has land perfect for gardening, she reluctantly agrees to be a damsel and go on a quest to save the crown prince, who has been captured by a mysterious dark mage. She brings her best friend, Rune, along for the ride, but soon encounters her rivals, who are forced to join her on the quest out of necessity.

The book is highly genre savvy and frequently lampshades and mocks typical tropes found in YA fiction and fantasy fiction in general, hence one of the reasons why I liked it so much. The immediately apparent one is 'damsels to the rescue; princes in distress', but the author playfully mocks several other tropes such as skimpy female armor and the typical flavor of teen drama found in YA fic. She also includes a considerable amount of dialogue regarding gender in the fantasy and YA genres, but manages to do this in a way that isn't distracting or soapboxy.

Another praise I have for this book is the characters. Terri is a funny, often snarky narrator who was a fun character to read about. All the characters are quite dynamic and go through noticeable growth from the beginning to end. My personal favorite (for her growth was most apparent to me) was Ashia, who you will probably hate at first but...just read it. By the end you'll know why I love her. ;)

In all, I sincerely enjoyed this and I can't wait for the next volume in the Darkhorse Saga.
Read more
3 people found this helpful
Helpful
Comment Report abuse

Negative:
- I was really ehhhh about the main romance, and Terri's male sidekick having a POV. Maybe because nothing in the blurb suggested it, so I wasn't prepared for it? But I really would have preferred this book without a romance
- Also, it kinda ended it with most of the cast (except for one girl, because there were 4 girls and only 3 boys) pairing up in m/f pairings which is also ehhh
Read more
Helpful
Comment Report abuse
See all reviews

Lucille @ adragoninspace
3.0 out of 5 stars A world where princes are kidnapped and it's the damsels that save them
Reviewed in France on September 29, 2017
Verified Purchase
In this novel, damsels saves princes, but the main character actually refuses to do so. Her mother is pressuring her to go on this quest while all she's intereted in is her garden: she's a plant mage! There's a bit of a "not like other girls" trope at first but it is quickly thrown aside once Terri teams up with other damsels. She'll get to know them better and revise her judgement. It was a very fun read, with both girls and boys revolting against society's expectations towards them according to their gender.
Read more
Report abuse
Translate review to English
See all reviews