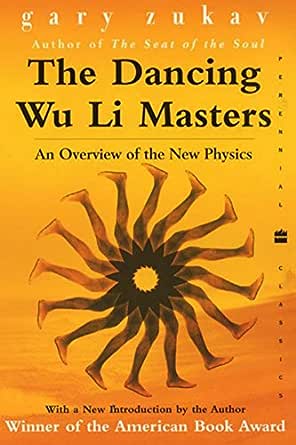 Flip to back Flip to front
Audible Sample Playing... Paused   You are listening to a sample of the Audible narration for this Kindle book.
Learn more
ISBN-13: 978-0060959685
ISBN-10: 0060959681
Why is ISBN important?
ISBN
This bar-code number lets you verify that you're getting exactly the right version or edition of a book. The 13-digit and 10-digit formats both work.


Gary Zukav, winner of the 1979 American Book Award in Science for The Dancing Wu Li Masters, is a graduate of Harvard University. Also the author of The Seat of the Soul, Soul Stories, and Authentic Power, Mr. Zukav lives in northern California.

My first exposure to quantum physics occurred a few years ago when a friend invited me to an afternoon conference at the Lawrence Berkeley Laboratory in Berkeley, California. At that time, I had no connections with the scientific community, so I went to see what physicists were like. To my great surprise, I discovered that (1), I understood everything that they said, and (2), their discussion sounded very much like a theological discussion. I scarcely could believe what I had discovered. Physics was not the sterile, boring discipline that I had assumed it to be. It was a rich, profound venture which had become inseparable from philosophy. Incredibly, no one but physicists seemed to be aware of this remarkable development. As my interest in and knowledge of physics grew, I resolved to share this discovery with others. This book is a gift of my discovery. It is one of a series.

Since both groups are intelligent, it is not difficult for members of one group to understand what members of the other group are studying. However, I have discovered a notable communication problem between the two groups. Many times my physicist friends have attempted to explain a concept to me and, in their exasperation, have tried one explanation after another, each one of which sounded (to me) abstract, difficult to grasp, and generally abstruse. When I could comprehend, at last, what they were trying to communicate, inevitably I was surprised to discover that the idea itself was actually quite simple. Conversely, I often have tried to explain a concept in terms which seemed (to me) laudably lucid, but which, to my exasperation, seemed hopelessly vague, ambiguous, and lacking in precision to my physicist friends. I hope that this book will be a useful translation which will help those people who do not have a scientific mental set (like me) to understand the extraordinary process which is occurring in theoretical physics. Like any translation, it is not as good as the original work and, of course, it is subject to the shortcomings of the translator. For better or worse, my first qualification as a translator is that, like you, I am not a physicist.

To compensate for my lack of education in physics (and for my liberal arts mentality) I asked, and received, the assistance of an extraordinary group of physicists. (They are listed in the acknowledgments). Four of them in particular, read the entire manuscript. As each chapter was completed, I sent a copy of it to each physicist and asked him to correct any conceptual or factual errors which he found. (Several other physicists read selected chapters).

My original intention was to use these comments to correct the text. However, I soon discovered that my physicist friends had given more attention to the manuscript than I had dared to hope. Not only were their comments thoughtful and penetrating, but, taken together, they formed a significant volume of information by themselves. The more I studied them, the more strongly I felt that I should share these comments with you. Therefore, in addition to correcting the manuscript with them, I also included in the footnotes those comments which do not duplicate the corrected text. In particular, I footnoted those comments which would have slowed the flow of the text or made it technical, and those comments which disagreed with the text and also disagreed with the comments of the other physicists. By publishing dissenting opinions in the footnotes, I have been able to include numerous ideas which would have lengthened and complicated the book if they had been presented in the text. From the beginning of The Dancing Wu Li Masters to the end, no term is used which is not explained immediately before or after its first use. This rule is not followed in the footnotes. This gives the footnotes an unmitigated freedom of expression. However, it also means that the footnotes contain terms that are not explained before, during, or after their use. The text respects your status as newcomer to a vast and exciting realm. The footnotes do not.

However, if you read the footnotes as you read the book, you will have the rare opportunity to see what four of the finest physicists in the world have to say about it as they, in effect, read it along with you. Their footnotes punctuate, illustrate, annotate, and jab at everything in the text. Better than it can be described, these footnotes reveal the aggressive precision with which men of science seek to remove the flaws from the work of a fellow scientist, even if he is an untrained colleague, like me, and the work is nontechnical, like this book.

The "new physics," as it is used in this book, means quantum mechanics, which began with Max Planck's theory of quanta in 1900, and relativity, which began with Albert Einstein's special theory of relativity in 1905. The old physics is the physics of Isaac Newton, which he discovered about three hundred years ago. "Classical physics" means any physics that attempts to explain reality in such a manner that for every element of physical reality there is a corresponding element in the theory. Therefore, "classical physics" includes the physics of Isaac Newton and relativity, both of which are structured in this one-to-one manner. It does not, however, include quantum mechanics, which, as we shall see, is one of the things that makes quantum mechanics unique.

Be gentle with yourself as you read. This book contains many rich and multifaceted stories, all of which are heady (pun?) stuff. You cannot learn them all at once any more than you can learn the stories told in War and Peace, Crime and Punishment, and Les Miserables all at once. I suggest that you read this book for your pleasure, and not to learn what is in it. There is a complete index at the back of the book and a good table of contents in the front. Between the two of them, you can return to any subject that catches your interest. Moreover, by enjoying yourself, you probably will remember more than if you had set about to learn it all.

One last note, this is not a book about physics and eastern philosophies. Although the poetic framework of Wu Li is conducive to such comparisons, this book is about quantum physics and relativity. In the future I hope to write another book specifically about physics and Buddhism. In view of the eastern flavor of Wu Li, however, I have included in this book those similarities between eastern philosophies and physics that seemed to me so obvious and significant that I felt that I would be doing you a disservice if I did not mention them in passing.

With its unique combination of depth, clarity, and humor that has enchanted millions, this beloved classic by bestselling author Gary Zukav opens the fascinating world of quantum physics to readers with no mathematical or technical background. "Wu Li" is the Chinese phrase for physics. It means "patterns of organic energy," but it also means "nonsense," "my way," "I clutch my ideas," and "enlightenment." These captivating ideas frame Zukav's evocative exploration of quantum mechanics and relativity theory. Delightfully easy to read, The Dancing Wu Li Masters illuminates the compelling powers at the core of all we know.

At an Esalen Institute meeting in 1976, tai chi master Al Huang said that the Chinese word for physics is Wu Li, "patterns of organic energy." Journalist Gary Zukav and the others present developed the idea of physics as the dance of the Wu Li Masters--the teachers of physical essence. Zukav explains the concept further:

The "new physics" of Zukav's 1979 book comprises quantum theory, particle physics, and relativity. Even as these theories age they haven't percolated all that far into the collective consciousness; they're too far removed from mundane human experience not to need introduction. The Dancing Wu Li Masters remains an engaging, accessible way to meet the most profound and mind-altering insights of 20th-century science. --Mary Ellen Curtin --This text refers to an alternate kindle_edition edition.

as written "the Bible" for those who are curious about the mind-expanding discoveries of advanced physics, but who have no scientific background.  Like a Wu Li Master who would teach us wonder for the falling petal before speaking of gravity, Zukav writes in beautifully clear language--with no mathematical equations--opening our minds to the exciting new theories that are beginning to embrace the ultimate nature of our universe...Quantum mechanics, relativity, and beyond to the Einstein-Podolsky-Rosen effect and Bell's theorem. --This text refers to an alternate kindle_edition edition.

8 1.5-hour cassettes --This text refers to an alternate kindle_edition edition.

"The most exciting intellectual adventure I've been on since reading Robert Pirsig's Zen and the Art of Motorcycle Maintenance." -- --Christopher Lehmann-Haupt, The New York Times

"This book is an extremely clear and easily understandable account of the latest developments in physics... -- --David Bohm, Professor of Physics, Birkbeck College, University of London, in Nature --This text refers to an alternate kindle_edition edition.