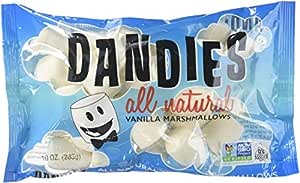 4.7 out of 5 stars
4.7 out of 5
2,690 global ratings
How are ratings calculated?
To calculate the overall star rating and percentage breakdown by star, we don’t use a simple average. Instead, our system considers things like how recent a review is and if the reviewer bought the item on Amazon. It also analyzes reviews to verify trustworthiness.

♡VeganKitty♡
3.0 out of 5 stars Carrageenan in vegan marshmallows
Reviewed in the United States on August 9, 2019
Size: 10 Ounce (Pack of 2)Verified Purchase
I was so excited to get these until I read it has carrageenan in it. It is however all vegan and non gmo. These marshmallows are very good but I won't buy again because of the carrageenan in it.
Degraded carrageenan, or poligeenan, is not safe to eat. ... This means that the agency has reviewed the evidence that poligeenan can cause cancer in animals and concluded that it may have the same effect in humans. Some scientists are concerned that food-grade carrageenan is also dangerous.
Please remake the Recipe and I'll be happy to buy again.
Read more

Delano S
5.0 out of 5 stars 'Halal' lawful for the Muslim folks! Read me.
Reviewed in the United States on January 5, 2016
Size: 10 Ounce (Pack of 1)Verified Purchase
I was looking for some 'Halal or lawful' marshmallows that does not contain any 'Gelatin' (Pork) or any other animal or alcohol products in their ingredients for a very long time! It's great that I found such a thing in the Vegan section of Amazon! Product packaging color is a little different then the actual image on display, but as of now..the ingredients has been inspected personally & they still match! very satisfied, Thank you! :)
Read more

Bollycats
5.0 out of 5 stars I can eat Rice Krispie Treats again!
Reviewed in the United States on January 25, 2018
Size: 10 Ounce (Pack of 1)Verified Purchase
These are yummy but very expensive! I've been vegetarian for over 30 years and can't remember the last time I had a Rice Krispies Treat. They didn't work following my Mom's recipe, but they worked perfectly using the recipe on the back of the bag. (I guess the coconut oil is needed to thin them out) I'm very happy I can have these treats again---well, maybe not. Now I'll be eating them all the time! Thanks, Dandies!
Read more
38 people found this helpful
Helpful
Comment Report abuse

MrsT
3.0 out of 5 stars Sad these weren’t better.
Reviewed in the United States on September 24, 2018
Size: 10 Ounce (Pack of 1)Verified Purchase
I have a real love/hate relationship with these marshmallows.

Pros: Plant-Based! Vegan-Friendly! Yay! Also, they taste like regular marshmallows. A really nice, sweet, vanilla-hinted marshmallow flavor. Texture is light and fluffy (I expected them to be much more dense) initially... I’ll explain more in a second.

Cons: while the flavor is nice, and the marshmallows are light and fluffy, after a few seconds of chewing they take on a gummy, pasty texture that is a bit off-putting. Also, they leave a lingering aftertaste that I could do without.

Add’l con: I REALLY wanted to use these with some vegan butter spread and vegan rice crispy cereal to make vegan rice crispy treats (one of my kids is lactose intolerant, and I like to keep a plant-based diet most of the time, so we eat a lot of vegan food, even though we don’t identify as “Vegan”). I quickly realized all the extra gums and stabilizers That are used to replace the gelatin cause the marshmallows to not melt very well. After standing at the stove for a good five minutes, stirring and stirring and stirring, I still had largely solid marshmallows in the pan. All of a sudden, they just turned to liquid. No joke or exaggeration, in less than five seconds. I quickly poured the marshmallows and melted butter spread into the waiting rice cereal, and started stirring. I couldn’t even get half-way done, and the whole thing had turned into a thick, gummy mess. I had to have my husband takenover stirring to finish the job. Once we got them pressed into a pan and let them cool, we sampled. Yup, the initial vanilla-marshmallow flavor was there, but then the gummy-pasty aftertaste kicked in.

Moral of the story:

Use ‘em if you have to, but be prepared for some serious oddity. For the cost, I don’t think I’ll be buying them again.
Read more
25 people found this helpful
Helpful
Comment Report abuse

alchickypup
5.0 out of 5 stars Camp fire anyone?
Reviewed in the United States on December 6, 2017
Size: 10 Ounce (Pack of 1)Verified Purchase
Got these cause camping is a big thing in my household. And recently going vegan means I have to figure out a way to make traditional things veganized. Lol... These made roasting marshmallows on an open fire a fun event that we can still do as a family. They burn the same amount and taste just as squishy as ever!
Read more
27 people found this helpful
Helpful
Comment Report abuse

A. Felton
5.0 out of 5 stars Vegan marshmallows!?!
Reviewed in the United States on June 16, 2017
Size: 10 Ounce (Pack of 1)Verified Purchase
Vegan marshmallows?!? My expectations were low. I wanted rice krispie bars but I can't do gelatin. These are pretty dang good. I ended up eating a bunch of them (and was horrified to learn that there's 50 calories in each!) and did make rice krispie bars--they weren't like the real thing but they weren't bad. I'd recommend these for just eating or s'mores. Expensive but worth it!
Read more
12 people found this helpful
Helpful
Comment Report abuse

Lindsey
5.0 out of 5 stars Amazing
Reviewed in the United States on November 17, 2017
Size: 10 Ounce (Pack of 1)Verified Purchase
Smells odd and has weird visual texture, but when you put them in your mouth they taste like normal marshmallows. I bought these and the mini pumpkin dandies to use in rice krispie treats for my vegan friend who hadn't had them in a while due to the gelatin in marshmallows, and we both loved them.

Takes a bit longer to melt, but don't let it discourage you from giving them a go. They're really great.
Read more
9 people found this helpful
Helpful
Comment Report abuse
See all reviews

Amazon Customer
3.0 out of 5 stars Small bag of marshmallows with hefty price tag
Reviewed in the United Kingdom on June 26, 2019
Size: 10 Ounce (Pack of 2)Verified Purchase
Massively expensive but as they are a gift it’s not something I’ll ever have to buy again . Nearly £15.00 for two small bags of marshmallows is ridiculous . I’m not sure what I expected but clearly a more substantial amount than what I got . Hopefully the recipient of the gift will enjoy them so that will in some part negate the whopping price tag .
Read more
3 people found this helpful
Report abuse

Jo881001
5.0 out of 5 stars Good but expensive
Reviewed in the United Kingdom on May 6, 2019
Size: 10 Ounce (Pack of 2)Verified Purchase
These are great but very overpriced. They are basically a vegan version of the 90p supermarket bags. I loved them but I’m not sure why omitting gelatine makes them so pricey! Ion terms of delivery they arrived quickly & well packed.
Read more
3 people found this helpful
Report abuse

MR J MCDONALD
5.0 out of 5 stars Great product, horrible price
Reviewed in the United Kingdom on February 16, 2020
Size: 10 Ounce (Pack of 2)Verified Purchase
You simply can’t get vegan mallows elsewhere. The price is silly, but I pay it each time I need vegan mallows. Feels like sellers are milking it with these but I guess until someone makes something to compete this is the best option.
Read more
One person found this helpful
Report abuse

Jenna Leak
4.0 out of 5 stars An indulgent trear
Reviewed in the United Kingdom on February 5, 2020
Size: 10 Ounce (Pack of 2)Verified Purchase
Love them but can't say I found them that much better than other vegan marshmallows which I am able to buy at the supermarket. Can't find many this size though. Just a shame about the price. Would deter me from ordering again only due to cost. The product is great! :/
Read more
One person found this helpful
Report abuse

Hannah Marchant
5.0 out of 5 stars really great
Reviewed in the United Kingdom on May 5, 2019
Size: 10 Ounce (Pack of 2)Verified Purchase
I have bought these so many times now as they are completely lush, its so hard to find quality marshmallows that are suitable for Vegan/Vegetarian as most aren't great quality or those tiny silly ones so, when I found these I wasn't expecting much but as soon as I put that huge fluffy goodness in my mouth I was well and truly hooked, these are by far the best marshmallow I have ever had (& I have had gourmet ones) I even let my mum try a few and she also loved them and couldn't tell the difference between these and marshmallows with Gelatine. Think I am going to be a very long term customer & at £9 for two packs they are a real bargain!
Read more
Report abuse
See all reviews